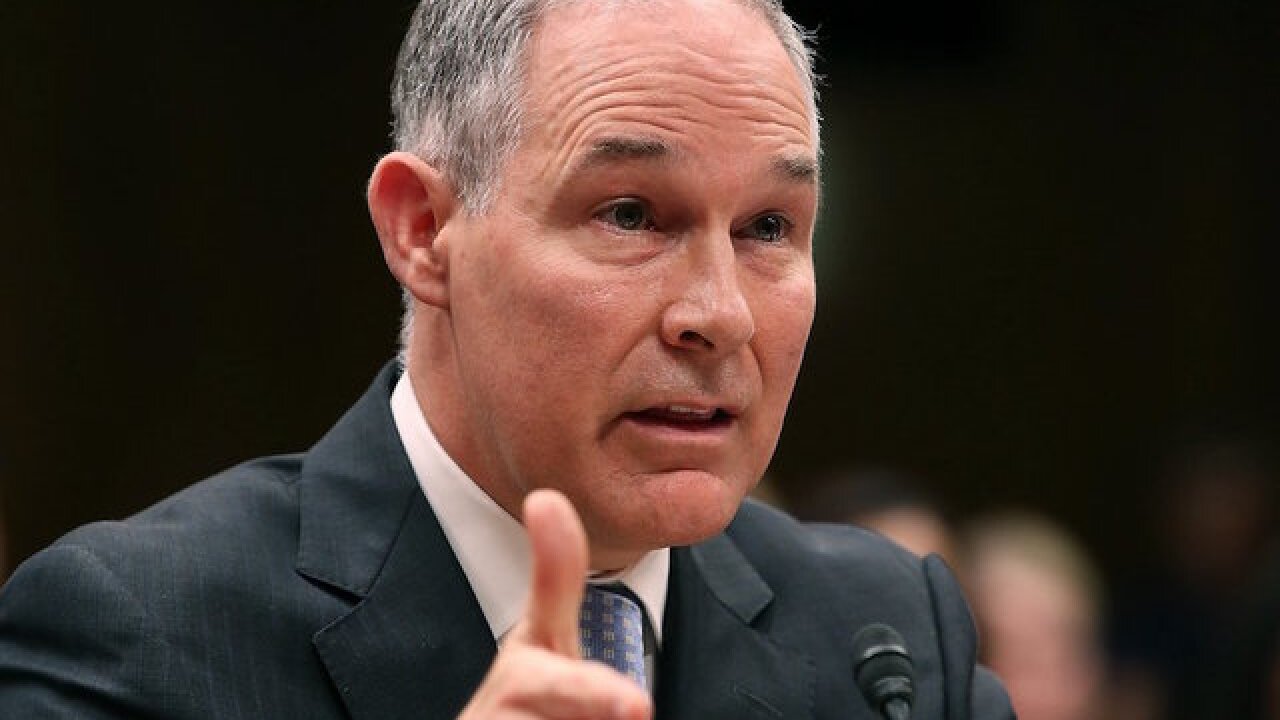 © 2018 Cable News Network, Inc.
Mark Wilson/Getty Images
<p>Journalists from CNN, the Associated Press and the trade publication E&E were barred by the EPA from entering the event, which was focused on harmful chemicals in water.</p>

The Environmental Protection Agency blocked reporters from several news outlets from a national summit on Tuesday where Scott Pruitt, the agency's chief, was speaking.

Journalists from CNN, the Associated Press and E&E News, a publication that covers energy and environment issues, were barred by the EPA from entering the event, which was focused on harmful chemicals in water. A handful of other reporters from other news organizations, however, were allowed inside the event for Pruitt's opening remarks after having been previously invited by the agency the day before.

In a statement, Jahan Wilcox, an EPA spokesman, said the agency barred reporters from attending due to space limitations inside the venue. He said the EPA was able to accommodate only 10 reporters and that it provided a livestream "for those we could not accommodate."

"This was simply an issue of the room reaching capacity, which reporters were aware of prior to the event," Wilcox said.

A report published by The Hill, however, said a handful of seats in the press section remained vacant by the time Pruitt began speaking. Another reporter told Politico there were dozens of empty seats in the room, and a photo obtained by CNN also showed space for cameras.

Additionally, the Associated Press said in a story that one of its reporters, denied entry, was grabbed by security guards and forcibly shoved out of the building after asking to speak to an EPA public affairs person. A CNN photographer saw the female journalist being shoved out of the building by a uniformed guard, and the Associated Press journalist recounted the incident to CNN immediately after it took place.

When reached by phone and asked about the Associated Press report, Wilcox declined to comment to CNN beyond his original statement, which said he was "unaware of the individual situation that has been reported."

CNN was also blocked from attending the summit. A CNN photographer was screened by security guards before the event and was waiting for an escort or further information. Wilcox arrived soon after and provided security with a list of news outlets and reporters, instructing them not to let anyone not on the list into the event. The CNN photographer then asked if he could enter the event and was told by security he couldn't.

Separately, a CNN reporter and producer lined up with members of the public and presented their IDs and credentials, identifying themselves as reporters. The individual manning the door said he needed to ask the press office if they could be permitted to enter. A few minutes later, he returned and said the CNN journalists were not allowed in.

In a statement, a CNN spokesperson said, "Today, CNN was turned away from covering the PFAS National Leadership Summit at the EPA after multiple attempts to attend. While several news organizations were permitted, the EPA selectively excluded CNN and other media outlets. We understand the importance of an open and free press and we hope the EPA does, too."

Sally Buzbee, executive editor of The Associated Press, said in a separate statement, "The Environmental Protection Agency's selective barring of news organizations, including the AP, from covering today's meeting is alarming and a direct threat to the public's right to know about what is happening inside their government."

Buzbee added, "It is particularly distressing that any journalist trying to cover an event in the public interest would be forcibly removed."

Following the media firestorm, the EPA reversed course and opened the second portion of the summit, which Pruitt was not scheduled to speak at, to the press.