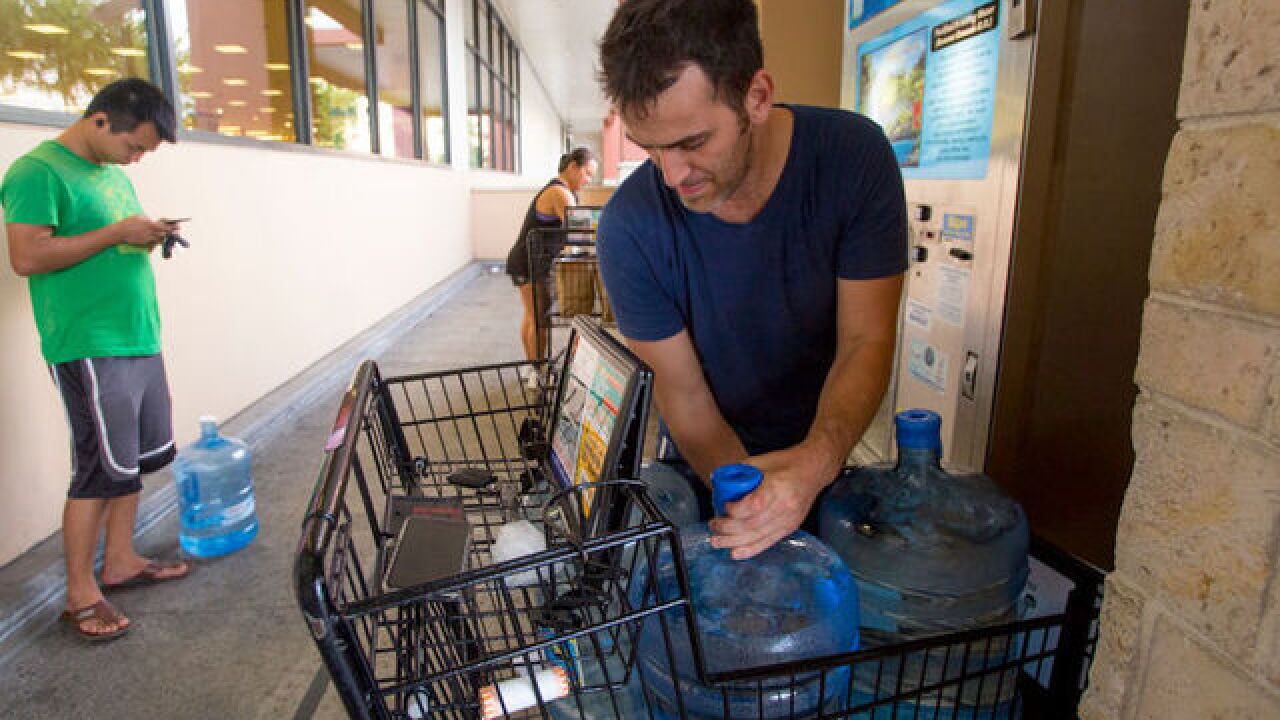 Copyright Getty Images
Kat Wade
<p>Wenkai He, left, waits his turn to fill up his 3 gallon water jug for just $1.50, while Alex Krivoulian fills three times as many water jugs at Safeway on Kapahulu in preparation for Hurricane Lane on Wednesday, August 22, 2018 in Honolulu, Hawaii. Hurricane Lane is a high-end Category 4 hurricane and remains a threat to the entire island chain. </p> 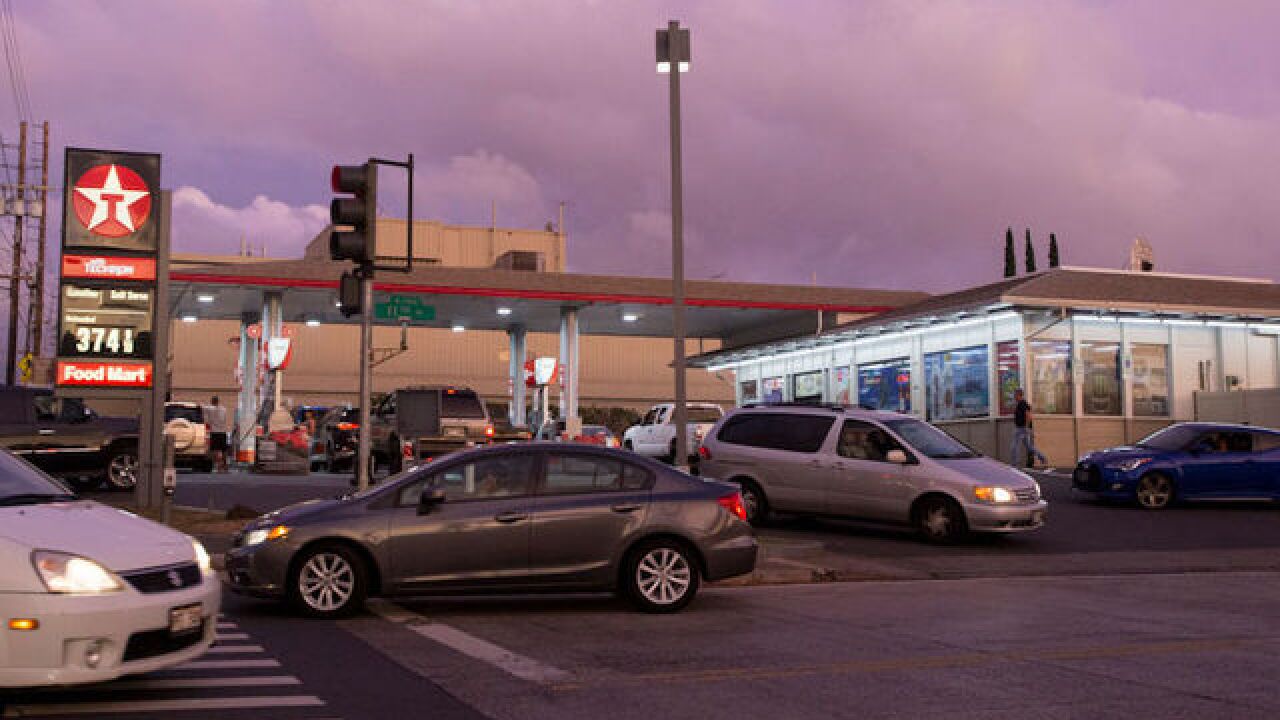 The center of the storm — which could become the first major cyclone to make landfall in the state in 26 years — is expected to move very close to the main islands or cross land Thursday through Friday, forecasters said.

It could be so devastating that authorities are urging residents to set aside two weeks' worth of food and water.

"Be prepared to shelter in place with 14 days of food supplies and water and any other necessities," Hawaii Gov. David Ige said at a news conference Wednesday.

The storm's center, with maximum sustained winds near 130 mph, was in the Pacific about 210 miles south-southwest of the Big Island town of Kailua-Kona around 5 a.m. HT Thursday (11 a.m. ET).

Landslides are a concern, with 10-30 inches of rain forecast through the weekend -- and slides already were happening on the Big Island as the storm's outer bands hit Thursday morning.

About 7 to 12 inches of rain already had fallen on parts of the Big Island by early Thursday, the National Weather Service office in Honolulu said.

Buses around Honolulu have been picking up residents in need and taking them to shelters. All public schools canceled classes until further notice, and many state employees have been asked to stay home.

Tropical storm force winds (39-73 mph) stretch out to 140 miles, so even if the hurricane doesn't make landfall, it could have widespread impact. Lane threatens to bring dangerous winds, landslides, rough surf and major flooding.

All of the islands are under weather alerts.

Why is Hurricane Lane so rare?

The Central Pacific gets few hurricanes and tropical storms: The Atlantic or Eastern Pacific usually see many more named storms.

Hawaii is a small target in a vast ocean, and isn't often threatened: Hawaii gets a named storm within 60 miles of its coastline about once every four years on average, forecasters say.

Lane could become a further rarity if its center crosses land. Only two hurricanes have made landfall in Hawaii since the 1950s: Hurricane Dot in 1959, and Hurricane Iniki in 1992.

How are people reacting?

People have been rushing to stores for supplies and are stocking up on canned foods, ramen, water and toilet paper.

Some were going for plywood to board their windows and for generators. Others have been filling up propane tanks and waiting in lines that circle around the block to get gas for their cars.

On the Big Island, cafe owner Eugene Yi shut down his business Wednesday. He and others put tape and boards over the business' windows, and lined the exterior with sandbags.

"A couple days ago, we were like, 'Oh, it's just going to blow over.' Then ... we saw people at the stores panicking and wiping out all the water," Yi, owner of Kona Wave Cafe in Kailua-Kona, told CNN affiliate KHON on Wednesday.

"So now we're in a rush to get super safe, (and) try to get this as secure as possible."

Authorities are asking people to seek shelter before it's too late or to stay in their homes if they believe those structures can withstand hurricane winds.

Many others are leaving. Long lines were seen at airports in Honolulu as hundreds of people tried to catch flights out of the islands before the storm comes closer.

The 15 airports throughout the state will remain open as long they don't suffer damage to their infrastructure or the debris "makes flight operations unsafe," the Hawaii Department of Transportation said in a statement.

President Donald Trump approved a disaster declaration for Hawaii on Wednesday ahead of the storm.

In a statement announcing Trump's approval, Gov. David Ige said Hawaii had submitted the request for a Presidential Major Disaster Declaration to help with the impact the hurricane may have in the islands.

"The approval of the Presidential Disaster Declaration means that Hawai'i will have quick and efficient access to federal resources in the wake of Hurricane Lane, as our communities and residents recover from any damage and losses caused by the storm. We are grateful to the President and FEMA for the swift approval of our request as our state braces for the severe weather ahead," the governor said.

What are experts saying?

Tropical-storm-force winds -- 39-73 mph -- and rain could be seen on portions of the Big Island and Maui County on Thursday, the Central Pacific Hurricane Center said.

As Hurricane Lane's outer bands approach the islands, steady and heavy rain could lead to major flash flooding. Most areas are expected to see 10 to 20 inches through Sunday, while some could get more than 30 inches.

Another important threat is storm surge.

"The combination of a dangerous storm surge and large breaking waves will raise water levels by as much as 2 to 4 feet above normal tide levels along south and west facing shores near the center of Lane," the hurricane center said.

The surge will be accompanied by large and destructive waves.

While the exact path of Lane remains uncertain, CNN meteorologist Pedram Javaheri says the storm could weaken as it nears the islands. Conditions could trigger a weakening of Lane in the coming days, but it would still be dangerous because it's likely to remain a Category 1 cyclone.