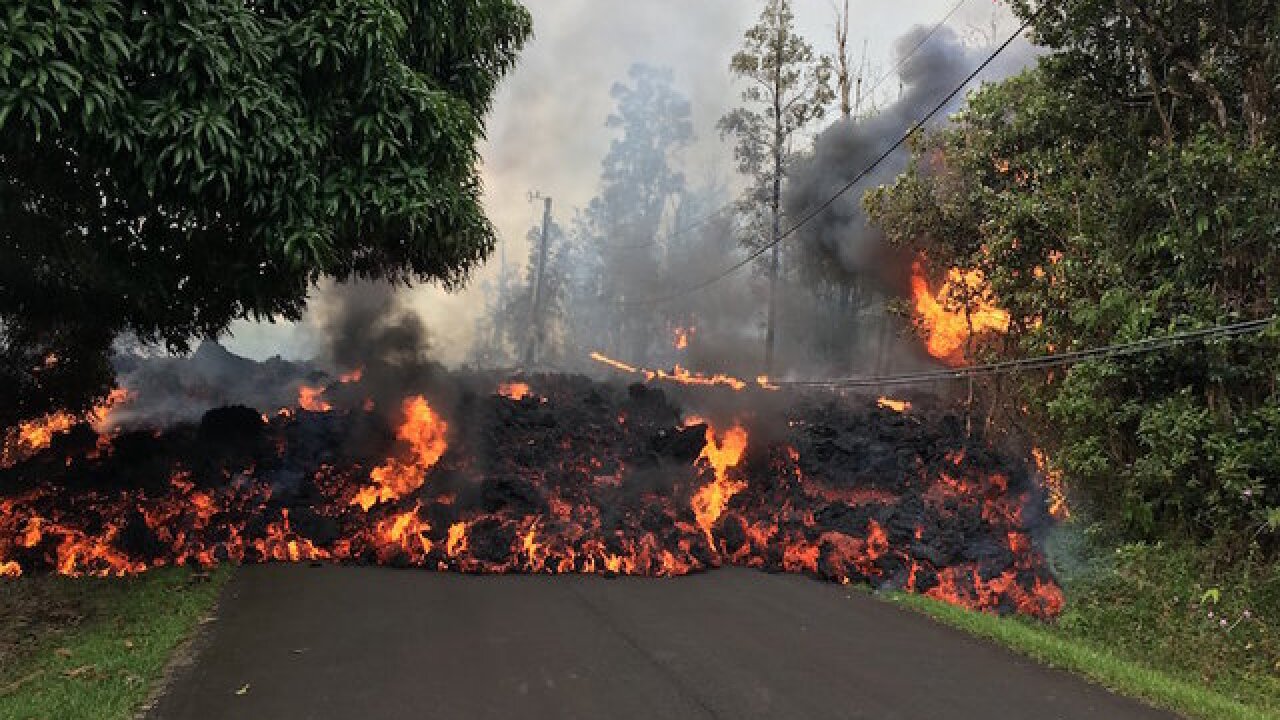 Things at Hawaii's erupting Kilauea volcano are kicking up.

The volcano has already been oozing lava, which has  gobbled up roads and homes  and emitted dangerous gases.

Now scientists are warning of a whole bunch of other possible hazards: acid rain, a bunch of falling ash, and eruptions that could propel huge boulders into the sky. Hazardous fumes continue to be released.

These plagues sound almost biblical in their frequency and fury. They're a lot to keep track of. Here are the main threats:

What we're looking at: Kilauea has been  erupting almost continuously for years , but earthquakes and lava breakouts kicked off in the past couple of weeks. Now there's increased activity in the summit's Halemaumau crater.

Just this Wednesday, there was an explosion that sent a huge column of ash above the crater.

We could see even larger explosions and columns of ash over the coming weeks, the US Geological Survey  says .

What causes it: That crater has a vent -- a crater within the crater -- that has a fluctuating lake of lava. At the moment, that lake of super-hot molten rock is dropping.

As the lake retreats, rocks from inside the crater's walls will fall. That triggered  Wednesday's explosion , the USGS says.

That's expected to continue. But bigger blasts could be in store. If the lava column drops to groundwater level, water could rush into the void and create large, steam-driven explosions.

The volcanic ash coming from the explosions are small particles of rock and volcanic glass, and can be spread far by winds.

How it impacts people: If there's enough of it, it could make daytime seem like night.

"Because of the unexpected darkness during daylight hours ... and the sometimes strong smell of sulfur during an ashfall, many people describe the experience as eerie and frightening, disorienting and confusing, or dreadful," the  USGS says .

Serious health problems aren't common, but some people may have trouble breathing during severe ashfall, especially those with existing conditions like asthma. Everyone should generally avoid the ash as much as possible, and people who can't avoid exposure should wear face masks when outside,  the USGS says .

What we're looking at: Remember those steam-driven explosions at the summit -- the ones caused by groundwater entering the void left by the retreating lava? Those would be trouble.

Those blowouts could blast out all sorts of debris: "Ballistic projectiles" from pebble-size rocks to several-ton blocks, the  USGS says .

The pebbles could be thrown several kilometers. The huge boulders could travel more than a half-mile.

How it impacts people: Fortunately, the immediate area mostly comprises a national park and is not heavily populated. One of the nearest communities, creatively named  Volcano , and its roughly 2,000 people are about three miles from the summit.

But the Hawaii Volcanoes National Park will be closed Friday until further notice, because officials are worried one of those steam-driven explosions could happen.

What we're looking at: Erupting volcanoes spew hazardous sulfur dioxide gas. If conditions are right, that gas and other pollutants can settle with moisture and dust to create a haze called volcanic smog, or " vog ," with tiny sulfuric acid droplets.

If it rains when it's voggy, you get acid rain.

What causes it: We've had vog already, but mostly south of the island over the ocean, because trade winds have largely been keeping it away.

But the winds are expected to calm down Thursday and Friday, possibly allowing the vog to settle over more of the island.

It should rain over the Big Island on Thursday into Saturday. The vog's sulfuric acid droplets would fall, too -- thus, acid rain.

How it impacts people: Vog seems to be the more immediate health concern. At higher concentrations, vog can cause headaches and irritation to the lungs and eyes, the University of Hawaii at Hilo says

High levels of acidic particles in vog "can induce asthma attacks, especially in adolescents, and can also impede the ability of the upper respiratory tract to remove other potentially harmful particles," the USGS says.

For people with asthma and other respiratory problems, "the effects are much more serious, causing a tightening of the airways in the lungs and making it very difficult to breathe," the university says.

But it adds: "There's been no clear evidence that vog causes lingering damage to normally healthy individuals."

But  acid rain can contaminate household water supplies  by leaching metals from building and plumbing materials, the USGS says. That includes rooftop rainwater-catchment systems that Hawaii residents use for drinking water.

What we're looking at: Lava has been erupting from new vents, or cracks, around the community of Leilani Estates -- east of the summit -- intermittently for days. There's no signs of that abating.

A 15th vent formed Wednesday in the nearby community of Lanipuna. There was no evidence of volcanic activity at midday Thursday.

How it impacts people: This lava doesn't usually get very far from the vents, but it has swallowed up streets, cars and homes.

Lava has  destroyed at least 36 structures and covered more than 115 acres .

The more than 1,700 people who live in that area were ordered to evacuate a week ago, when the lava emerged.

Residents are now allowed to check out their homes during an 11-hour period during the day, but officials say they must be prepared to flee at a moment's notice.