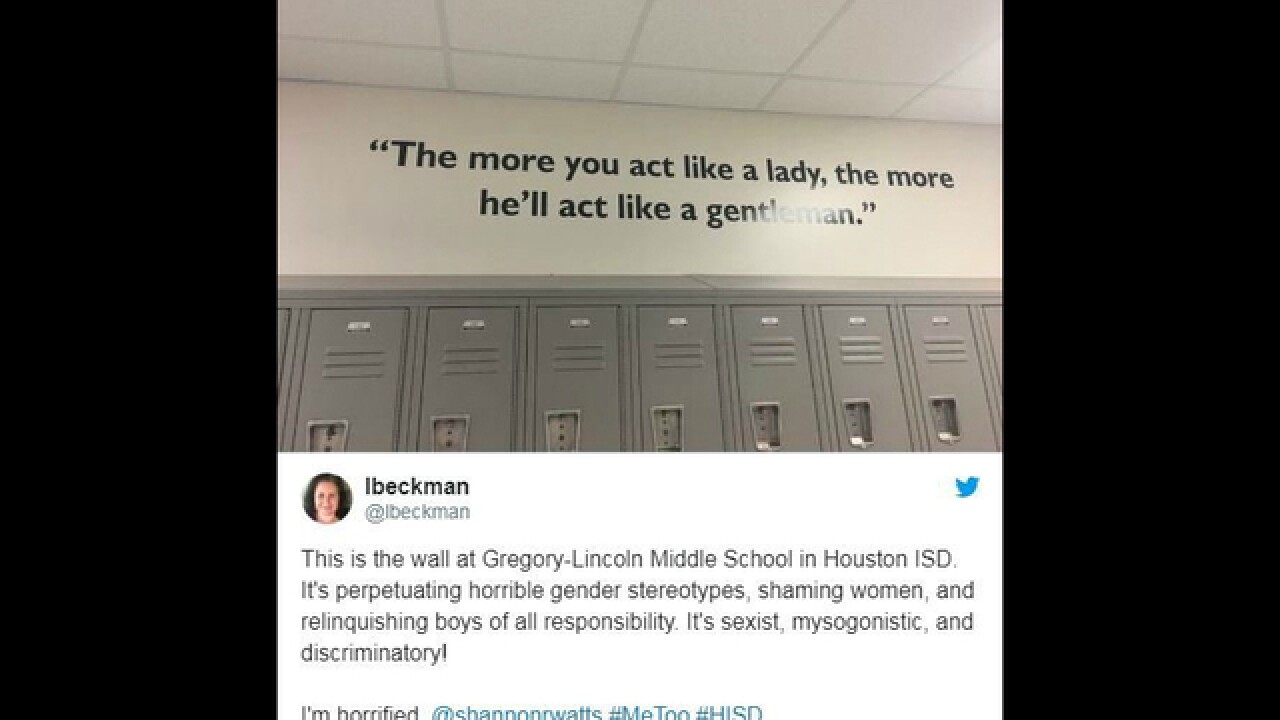 © 2018 Cable News Network, Inc.
CNN
<p>A Houston school has removed a quote popularized by a former New York madam after social media controversy over the saying, which was posted in a hallway above school lockers, according to CNN affiliate KTRK.</p>

A Houston school has removed a quote popularized by a former New York madam after social media controversy over the saying, which was posted in a hallway above school lockers, according to CNN affiliate KTRK.

The saying had been on a wall above lockers in Gregory-Lincoln Education Center for the Performing and Visual Arts for five years, according to KTRK, but it was removed after a mother posted an image of the quote to social media.

"It's perpetuating horrible gender stereotypes, shaming women, and relinquishing boys of all responsibility. It's sexist, misogynistic, and discriminatory!" Lisa H. Beckman, who first shared the image of the quote, wrote on Twitter Friday.

Beckman told CNN Saturday that her children attend school in the Houston Independent School District but not the school where the quote was displayed. She saw the photo on a friend's Facebook page and asked permission to share it.

"As soon as I saw it I was outraged," she said.

"It's a bigger problem than just a quote on a wall, it's how women in this country are treated," Beckman said. "My goal by posting it to Twitter was to get the school to take it down before any other children saw it."

Beckman said the school the quote was taken down within 10 hours of her tweeting the photo Friday.

"Why would that be disgusting? I think it's true in BOTH senses. If you act more like a gentleman, she will act more like a lady. This is to say- if you show nobility, more people will follow suit. I believe people are looking too much into this and CREATING an issue," Michael Waters tweeted.

A famed former New York madam said she used the quote to guide her "girls" in the 1980s.

The quote has been attributed to Sydney Biddle Barrows, whose arrest in 1984 was national news because of her upscale clients inspired a made-for-TV movie starring Candice Bergen.

In an 1987 interview with the Sydney Morning Herald, Barrows, a descendant of two passengers of the Mayflower and who came to be known in media as "the Mayflower Madam," said she would tell her workers the quote was a "basic rule that you should always keep in mind."

The quote was on a wall of the Gregory-Lincoln PK-5 Education Center, according to the Houston Independent School District.

CNN reached out to Gregory-Lincoln school, a combined elementary and middle school, for comment but didn't get an immediate response.