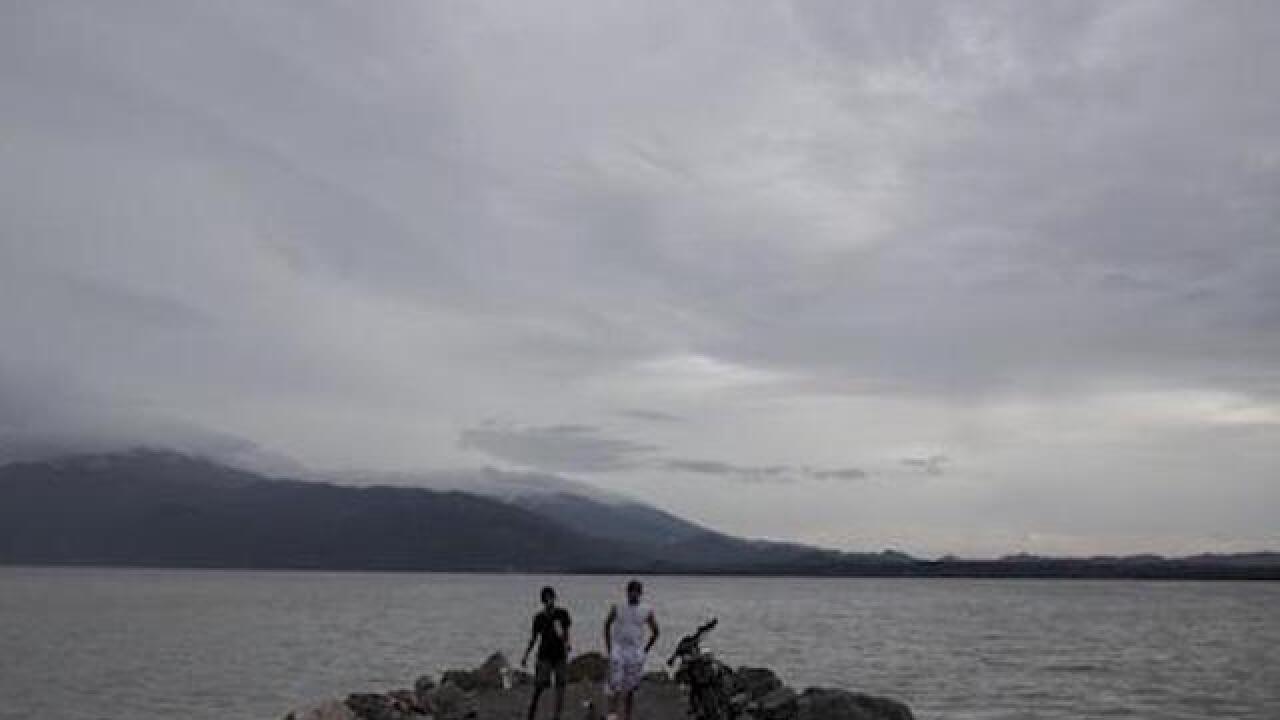 Copyright Associated Press
Luis Soto
<p>Villagers stand on the coast of the bay of Amatique, before the arrival of Hurricane Earl, in Puerto Barrios, Guatemala, Tuesday, Aug. 3, 2016. Hurricane Earl bore down on the coast of the Caribbean nation of Belize with the danger of high surf and winds, while also threatening neighboring Guatemala and southern Mexico with torrential rains. (AP Photo/Luis Soto)</p>

BELMOPAN, Belize (AP) — Hurricane Earl was downgraded to a tropical storm Thursday after slamming into the coast of the Caribbean nation of Belize with winds of 80 mph (130 kph) and moving inland over Guatemala and Mexico with heavy rains.

Earl made landfall as a Category 1 hurricane near Belize City and was moving roughly westward, the U.S. National Hurricane Center said. As it crossed northern Guatemala, Earl had sustained winds near 50 mph (80 kph). It was expected to continue weakening to a tropical depression by Thursday night or Friday morning.

The National Hurricane Center forecast that the storm would leave 8 to 12 inches (up to 30 centimeters) of rain over parts of Belize, Guatemala and southern Mexico. Isolated areas could receive as much as 18 inches (45 centimeters), causing flooding and mudslides.

Much of Belize was without electricity Thursday morning as residents began assessing the damage. Around the capital, some roofs were torn off, power lines were down and trees were uprooted. The rain continued and there was localized flooding.

There was still some phone service, but television and radio stations were largely off the air.

The country's emergency management agency issued a statement declaring the "all clear" on the storm, but warned people near rivers to head to higher ground. It said all of the country's dams were at flood stage.

The statement said there was major infrastructure damage in the offshore cayes, as well as in Belize City and Belmopan. It expected the international airport in Belize City to reopen Thursday.

Mexico discontinued all warnings associated with the storm and Belize replaced its hurricane warning with a tropical storm warning. The storm was centered about 115 miles (185 kilometers) west of Belize City and was moving west near 12 mph (19 kph).

Hotels along Belize's coast and the low-lying islands offshore had already pulled in awnings and beach chairs as the rains from the storm began whipping the coast Wednesday evening.

Authorities in the Mexican coastal state of Quintana Roo, to the north of the hurricane's strike, reported some evacuations. Some people evacuated low-lying coastal areas in nearby Guatemala.

The hurricane center said heavy rains would be a danger in southern Mexico through Saturday as Earl crosses the Yucatan Peninsula into the states of Tabasco and Veracruz.

On Wednesday, Earl raked the northern coast of Honduras with heavy rain. Officials said a big wave capsized a lobster fishing boat in the Caribbean, but all but two of the 83 people on board were rescued. The navy was looking for the two missing. Authorities also rescued four families in the coastal city of Trujillo after a river flooded.

Lisandro Rosales, head of Honduras' emergency commission, said there were reports of large numbers of trees and utility poles being knocked down. Schools and universities closed across Honduras' coastal provinces, as did two commercial airports.

In Belize, the government opened storm shelters and used radio and television broadcasts to urge residents of low-lying areas to move to higher ground.

Officials also ordered the international airport in Belize City to close, and archaeological reserves and national parks were shut. The Belize Tourism Board announced that cruise ship visits had been canceled for this week.

Employees of the Caribbean Villas Hotel, in San Pedro on Belize's Ambergris Caye, pulled in beach chairs and chaise lounges as rain began to fall on the popular beach resort.

"Anything that's not anchored in, we've pulled back and out of the way," said hotel manager Paul Jewitt.