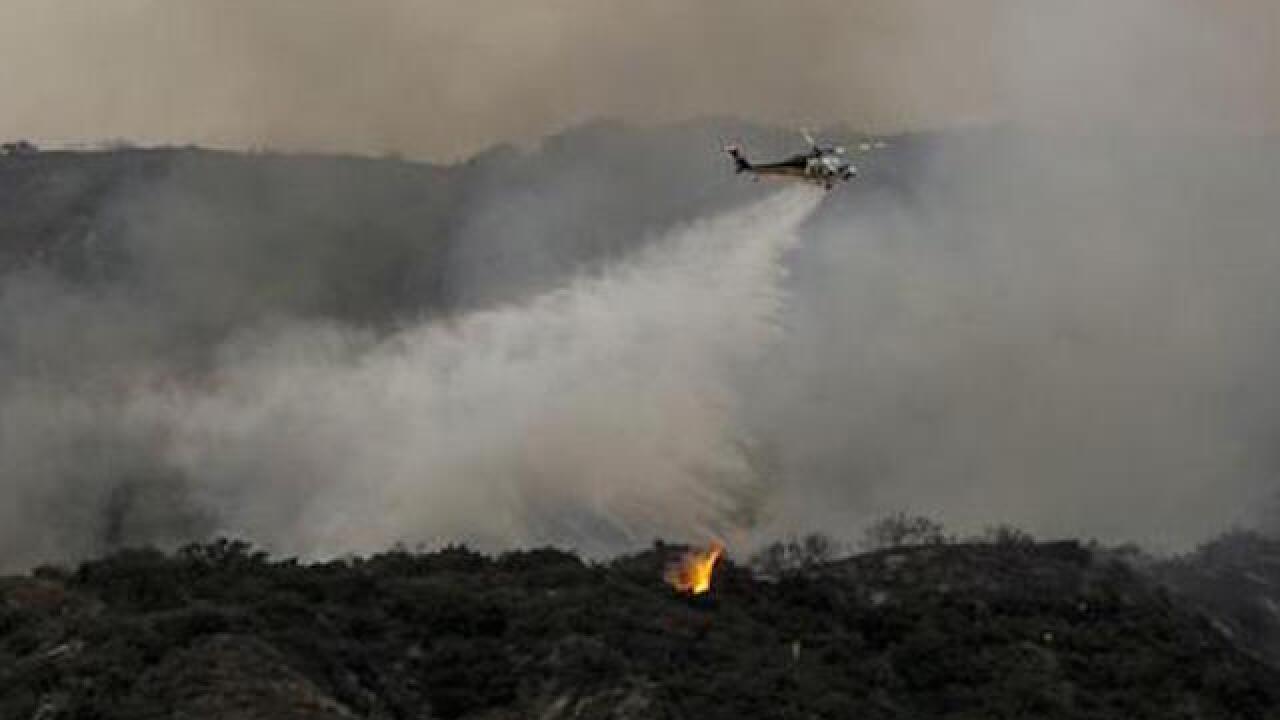 LOS ANGELES (AP) — Cooler, more humid weather gave at least some temporary help Wednesday to crews battling dangerous wildfires in Southern California, while other blazes across the West were on the move.

Improved weather in the aftermath of a severe heat wave allowed firefighters to make progress against two fires in the steep San Gabriel Mountains 20 miles northeast of Los Angeles. Some evacuations below in the foothill city of Duarte were lifted, but the calm was not expected to last.

"We will have stronger winds, so it could push the fire," incident commander Mike Wakoski said.

He expected gusts of up to 25 mph in the afternoon and evening, posing additional problems for hundreds of firefighters attacking the flames. A fleet of helicopters and air tankers and other resources are helping fight the fires totaling about 7½ square miles.

"They're starting to make good progress, but there's a lot of line to put in, and it's in a real inaccessible area," Wakoski said. "It's very hard for the firefighters to engage the fire safely, but they are out there doing so."

No homes have been lost, though flames have come close at times. More than 700 homes were ordered evacuated earlier this week, but it was not immediately clear how many were cleared for return Wednesday.

Near the Mexican border, two residences and 11 outbuildings burned in a wildfire about 40 miles southeast of San Diego. A thousand structures were threatened by the blaze, which grew to just over 10 square miles and was only partially contained.

Falling temperatures, rising humidity and cloud cover has helped, said Capt. Kendal Bortisser of the California Department of Forestry and Fire Protection. But firefighters still must deal with rough terrain and vegetation that has not burned in decades, he said.

Weather also helped on the rugged coast west of Santa Barbara. Fog moved into the area scorched by a blaze that began more than a week ago, and most mandatory evacuations were called off. With the more than 12-square-mile fire almost fully surrounded, firefighters shifted focus to battling hot spots within containment lines.

Resources were moving from that blaze to those in Los Angeles and San Diego counties.

Elsewhere in the West, a forest fire near the Colorado-Wyoming line exploded in size and forced campers to evacuate.

A shift in the wind turned a blaze burning slowly in a heavily wooded area with no permanent residents into a fast-moving threat, growing from 1 square mile to about 5. Trees killed by a beetle infestation were fueling the flames 140 miles north of Denver and 2 miles from Wyoming.

No more than 100 campers and people staying in cabins fled, Routt National Forest spokesman Aaron Voos said. More firefighters were expected, but getting more help was difficult because of the other Western blazes.

"Resources are kind of hard to come by right now," Voos said.

In southwest Utah, officials evacuated about 100 people as a wildfire moved down a rocky slope toward the mountain town of Pine Valley. The blaze was about a square mile but moving dangerously close to homes in difficult terrain, so more evacuations could come, officials said.

In eastern Arizona, firefighters expected to keep a wildfire spanning some 67 square miles from moving any closer to a rural town. The flames threatening the community of Cedar Creek made no significant movement in the last 24 hours thanks to sparse vegetation.

More than 15,000 people in nearby mountain communities have been told to prepare to evacuate.

In central New Mexico, more evacuees were expected to return home as firefighters inch closer to snuffing out a massive wildfire that ignited last week. The nearly 28-square-mile blaze in the mountains south of Albuquerque is more than halfway contained after destroying at least two dozen homes.