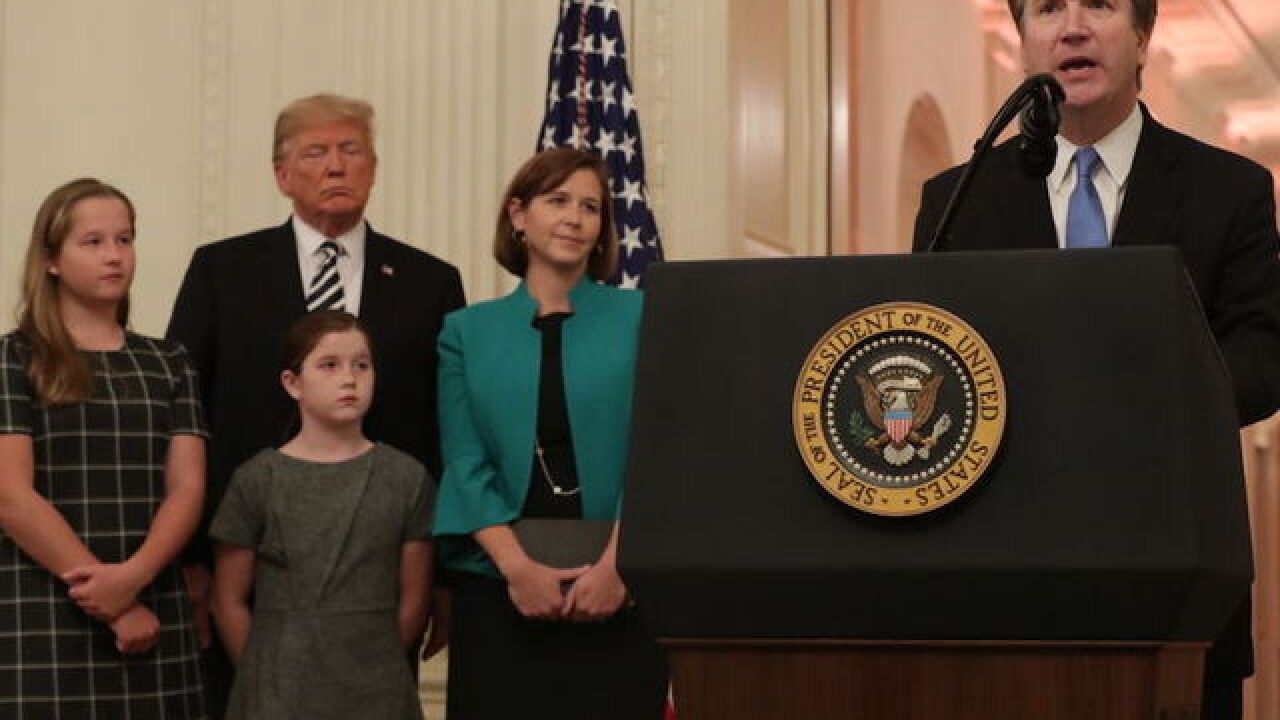 Justice Brett Kavanaugh, fresh off a confirmation process that featured one of the most polarizing and politicized hearings in modern times, will take the bench on Tuesday for the start of a new era that is expected to take the court decidedly to the right.

"I was not appointed to serve one party or one interest, but to serve one nation," Kavanaugh said Monday night during his ceremonial swearing-in at the White House.

"America's Constitution and laws protect every person of every belief and every background," he said.

Kavanaugh, 53, began work immediately after his official swearing-in on Saturday evening even as protesters stormed the front steps of the Supreme Court and pounded on the 13-ton bronze doors, furious that he had been confirmed despite a decades-old allegation of sexual assault brought by Christine Blasey Ford.

Fulfilling a promise from his confirmation hearing, Kavanaugh has hired four female clerks -- something that no other Supreme Court justice has ever done.

Kavanaugh and his team are settling into the former chambers of Justice Samuel Alito, who moved to the offices vacated by retired Justice Anthony Kennedy. Kavanaugh will also reunite with six of his former clerks on the US Circuit Court of Appeals for the District of Columbia who are currently clerking for other justices.

"He has played a double role in this historic moment," said former clerk Porter Wilkinson.

"Four of the female clerks currently serving at the Supreme Court were with him at the DC Circuit, and now he's tipped the balance at the court for the first time with an all-female clerk class," she said.

The women include a current clerk, Kim Jackson, who graduated from Yale in 2017; Megan Lacy, who had been part of the team working on his nomination at the White House and served previously as counsel to Senate Judiciary Chairman Chuck Grassley; Shannon Grammell, who clerked for Judge J. Harvie Wilkinson on the 4th Circuit; and Sara Nommensen, who worked in the Department of Justice and is a former student of Kavanaugh's at Harvard Law School.

Kavanaugh will sit on the far right side of the bench -- the seat reserved for the junior-most justice. Next to him will be Justice Elena Kagan, who hired him to teach at Harvard Law when she served as dean.

Kavanaugh knows many of the justices, who all showed up at the White House Monday night. He helped to vet Roberts and Alito when Kavanaugh was working as a lawyer in the White House. He attended the same high school as Gorsuch and has met the others at social and judicial conferences over the years. He has also played basketball in the Supreme Court's gym, which is jokingly referred to as the "highest court in the land." Last term he came to arguments at least once to watch a former clerk argue.

So far this term, there are no blockbuster cases on the court's docket, but significant issues concerning LGBT rights, the Affordable Care Act, the Deferred Action for Childhood Arrivals program and voting rights issues are percolating through the lower courts.

Kavanaugh is expected to vote with his conservative colleagues on the bench, even on some hot-button issues where Kennedy served as a swing vote. That shift delights judicial conservative who believe the confirmation will be one of Trump's most lasting legacies.

"Justice Kavanaugh will serve our country admirably on the court because he understands that the very best way to protect human dignity and freedom is by respecting and enforcing the limits on government power contained in our Constitution," said Leonard Leo, executive vice president of the Federalist Society, who has played a critical role in the selection of conservative judges for the Trump White House.

Kavanaugh's critics, unhappy with the Senate process, Kavanaugh's record and the way sexual assault allegations were handled, still plan to continue their protests against him.

"Brett Kavanaugh may look the part when he dons the robe, but Kavanaugh will be an illegitimate justice for as long as he sits on the Court, " said Brian Fallon, executive director of a group called Demand Justice that opposes Kavanaugh.

"His confirmation is an inflection point in the history of the court; there is no pretending any more that the court is an apolitical institution," Fallon said.