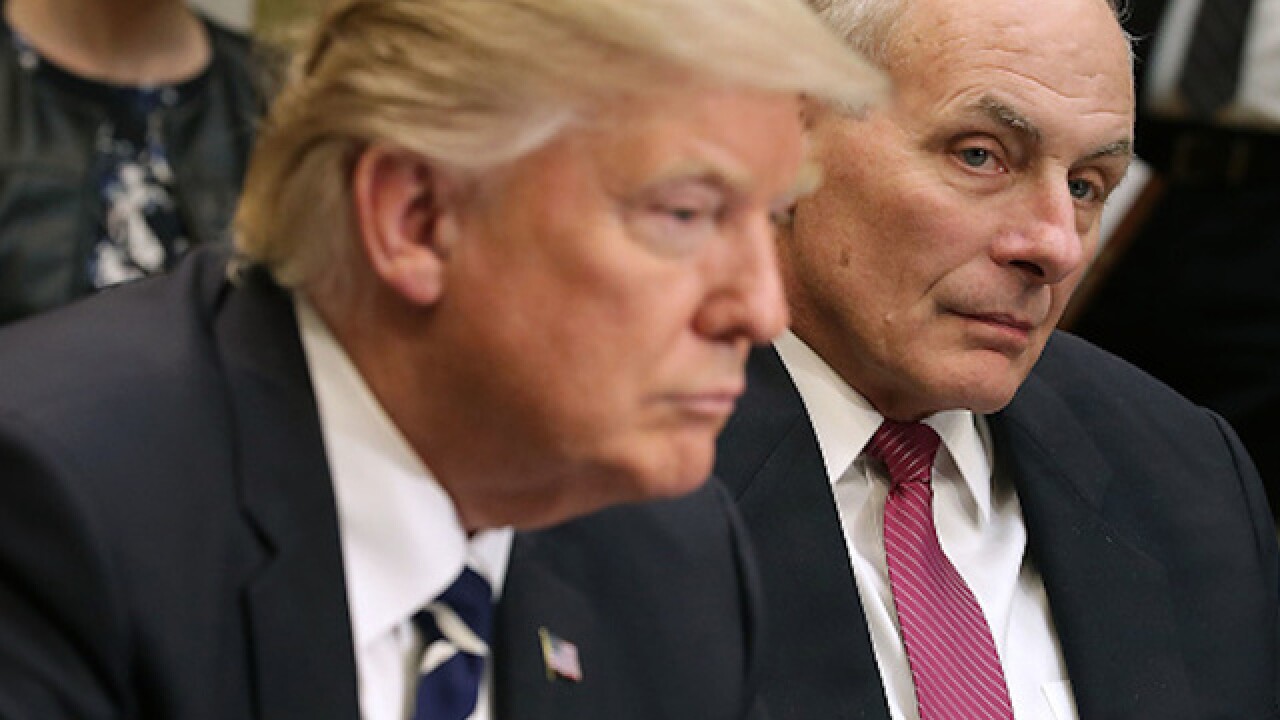 Copyright 2017 Scripps Media, Inc. All rights reserved. This material may not be published, broadcast, rewritten, or redistributed.
Chip Somodevilla
<p>WASHINGTON, DC - JANUARY 31: Homeland Security Secretary John Kelly listens as U.S. President Donald Trump delivers remarks at the beginning of a meeting with government cyber security experts in the Roosevelt Room at the White House January 31, 2017 in Washington, DC. Citing the hack of computers at the Democratic National Committee by Russia, Trump said that the private and public sectors must do more to prevent and protect against cyber attacks. (Photo by Chip Somodevilla/Getty Images)</p>

In an interview on NPR's "Morning Edition" that was released late Thursday, Kelly was asked whether the special counsel's probe leaves a cloud hanging over the White House.

"It may not be a cloud, but certainly the President is somewhat embarrassed, frankly," Kelly said.

Kelly also seemed to suggest that the Russia investigation affects Trump's relationship with other world leaders.

"When world leaders come in -- you know Bibi Netanyahu who was here and who's under investigation himself -- and it's like you walk in and you know the first couple of minutes of every conversation might revolve around that kind of thing," Kelly said, using the nickname for the Israeli Prime Minister who is under investigation in two separate criminal probes.

When asked if he shares the President's opinion that the Mueller probe is a "witch hunt," Kelly said, "Something that has gone on this long without any real meat on the bone, it suggests to me that there is nothing there, relative to our President."

A retired four-star Marine general, Kelly took over as Trump's chief of staff for Reince Priebus last July, hoping to bring order to a chaotic White House. But he has seen his influence diminish in recent months as Trump has started to bypass Kelly.

"In retrospect, I wish I had been here from day one," Kelly told NPR. "I think in some cases, in terms of staffing or serving the President, that first six months was pretty chaotic and there were people some people hired that maybe shouldn't have hired some people."

'The laws are the laws'

Before he took on the role of chief of staff, Kelly was the secretary of the Department of Homeland Security. Kelly told NPR that the vast majority of undocumented immigrants crossing the southern border into the US are "not bad people," but they also do not assimilate well.

"Let me step back and tell you that the vast majority of the people that move illegally into United States are not bad people. They're not criminals. They're not MS13," Kelly said, referring to the criminal gang. "But they're also not people that would easily assimilate into the United States into our modern society."

Kelly said the undocumented immigrants don't speak English and are "overwhelmingly rural people" from countries where "fourth-, fifth-, sixth-grade educations are kind of the norm."

"They don't integrate well; they don't have skills. They're not bad people. They're coming here for a reason. And I sympathize with the reason. But the laws are the laws," he went on to say.

However, he floated the idea of finding a path to citizenship for the more than 425,000 immigrants, many of whom have lived in the US legally for decades under TPS.

"I think we should fold all of the TPS people that have been here for a considerable period of time and find a way for them to be on a path to citizenship," Kelly said.