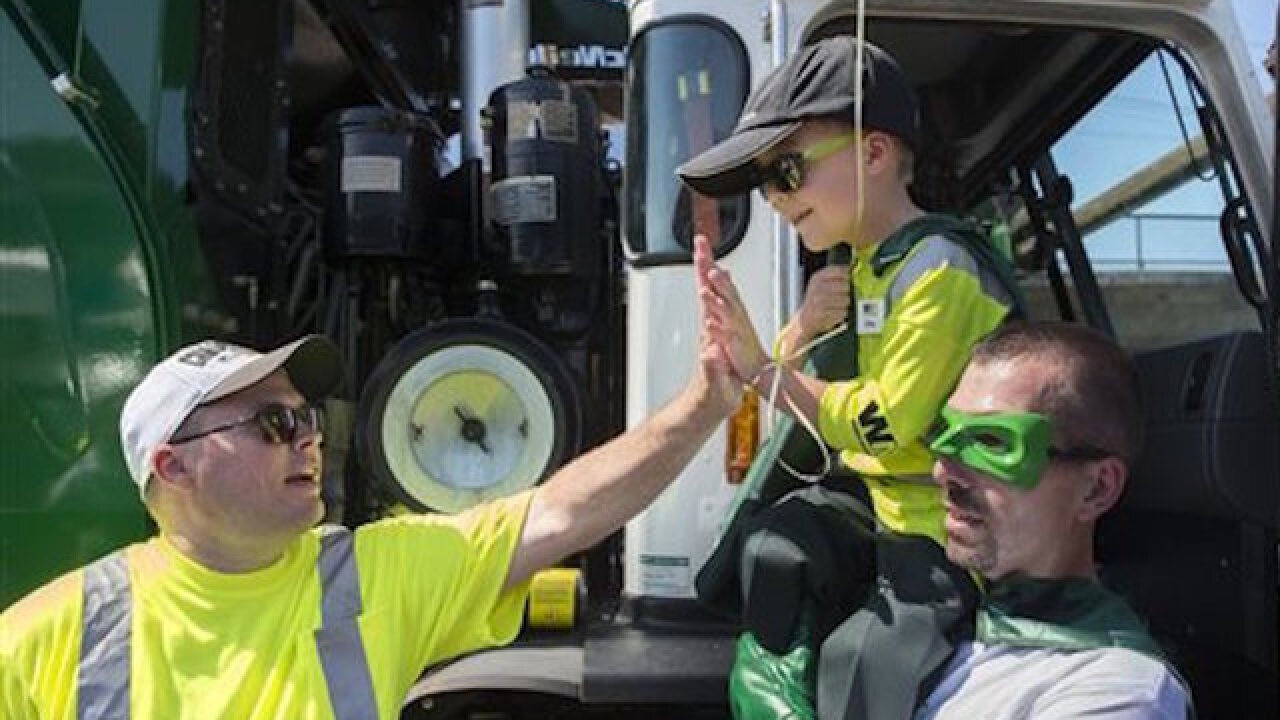 Eli Hiller
<p>Six-year-old Ethan Dean, who was diagnosed with cystic fibrosis at two weeks old, gets a high five while carried by Capt. Recycle, Mitch Zak during his stop at The Sacramento Bee to pick up recycling as part of his Make-A-Wish Foundation activity on Tuesday, July 26, 2016 in Sacramento, Calif. (Eli Hiller/Sacramento Bee via AP)</p>

Now, thanks to the Make-A-Wish Foundation, he got to experience what it's like to be a garbage truck driver. The boy who has cystic fibrosis rode in a real garbage truck through downtown Sacramento, collecting trash and recyclables, just like he's always wanted.

At his first stop in Sacramento, he was greeted by a crowd of more than 100 people at the Sacramento Bee. Wearing a cape that said "Hero Ethan" and a big smile, the boy seemed enthusiastic and surprised.

Later, when asked his favorite part of the day so far, he said it was "cleaning up garbage."

In 2013, Make-A-Wish transformed San Francisco into Gotham for a 5-year-old boy who had battled leukemia for years and dreamed of being Batkid. Miles Scott traveled from one crime scene to another, rescuing a damsel in distress and thwarting the plans of The Riddler and The Penguin, as crowds of people cheered him on.

Ethan's dream is less fantastic, more everyday superhero — almost all of his answers were garbage truck-related, said Jennifer Stolo, CEO of the local chapter of the Make-A-Wish Foundation. He really, really wants to be a garbage man when he grows up.

It meant the wish he'd be granted wasn't too mysterious.

"We pretty much knew it was going to be about garbage trucks," said Ethan's dad, Ken Dean, laughing. He's been watching them come down the street since he first learned how to crawl, his dad said.

Stolo and her team of "fairies" knew just what he wanted.

Five stops are planned Tuesday before the trip ends at the Capitol for a press conference and VIP lunch.

Ethan was diagnosed with cystic fibrosis as an infant and began treatment at eight weeks old. The genetic disorder is characterized by a buildup of thick mucus and frequent lung infections, and the median life expectancy is about 40 years old.

Though he and his parents haven't had a big talk about his diagnosis, his dad said every once in a while Ethan asks him a question or two. He's begun to realize that his friends and younger sister don't have to go to treatment like he does.

His dad hopes none of that will be on Ethan's mind Tuesday. The only thing he needs to think about is garbage. And trucks.

"I want him to have fun and not have to worry about the day-to-day," his dad said. "It's all about him."