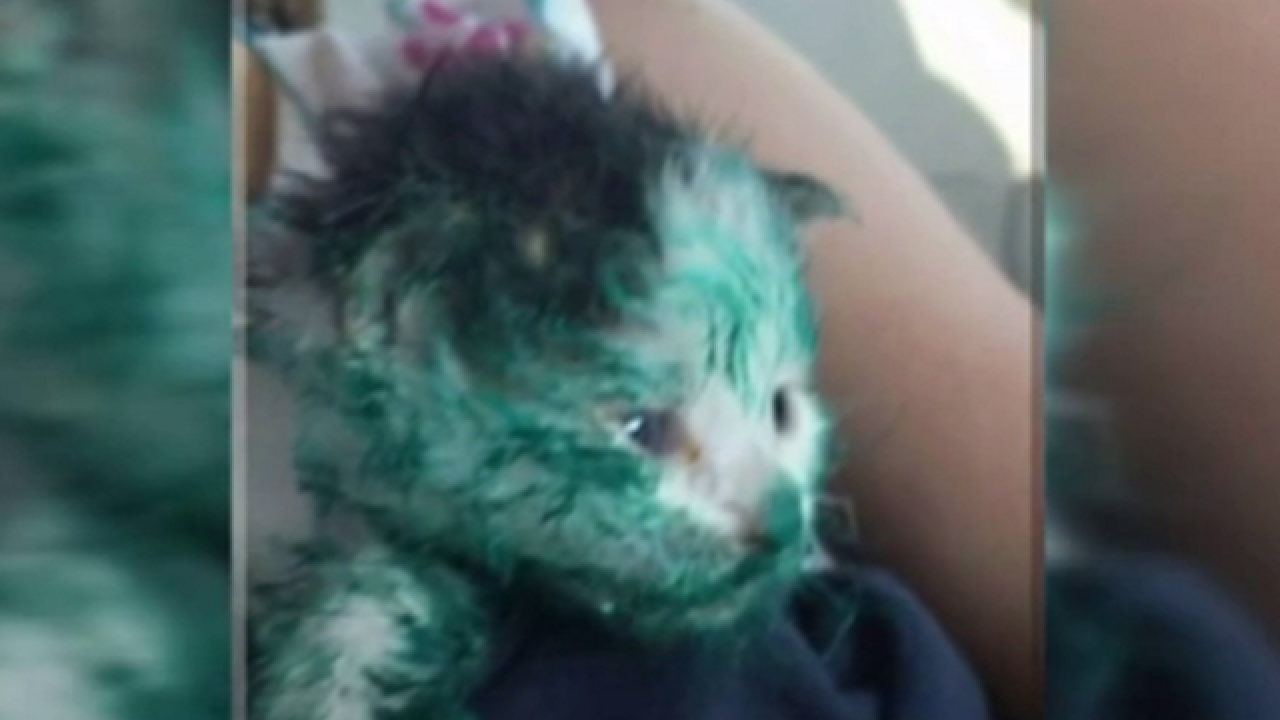 A kitten is recovering after being rescued from dumpster, where it was found in distress and covered in teal-colored paint.
It happened in Albuquerque, New Mexico.
An unidentified man reportedly discovered the tiny, distraught kitten while riding on his bike. He handed her to Wendy Hall-Devoti, who named her Teal.
Hall told local outlet KRQE she was at restaurant Blake’s Lottaburger when a man frantically rode up on a bike.
“He’s wearing this really nice blue shirt and a tie and it’s all covered in blue paint,” explained Hall, adding that the kitten was also covered in paint.
“Apparently when he was riding by on his bicycle, he heard a kitten meowing really loudly from a dumpster and he jumped in and he found this kitten and all the other kittens were dead,” said Hall. “He picked her up and got paint all over his clothes and was trying to find somebody to help.”
Hall, now Teal’s foster mom, said she took the paint-covered kitten and got help for it. Teal is now paint-free, a process she said took about a week.
However, in the midst of the craziness, Hall didn’t have a chance to get the man’s information.
“We just started wondering what if he was going to a job interview and he didn’t get the job because he saved this kitten,” she said. “Or what if his boss didn’t believe this big tough guy jumped in to save a kitten and he just came to work all covered in paint and he just lost his job.”
“Now we don’t know what happened to him and it was such a good thing to do,” Hall added. “You know when you’re on your way somewhere and you stop to save a kitten in a dumpster.”
Teal will be adoptable from a local animal shelter in the coming week, KRQE reports.
Copyright 2016 Scripps Media, Inc. All rights reserved. This material may not be published, broadcast, rewritten, or redistributed.