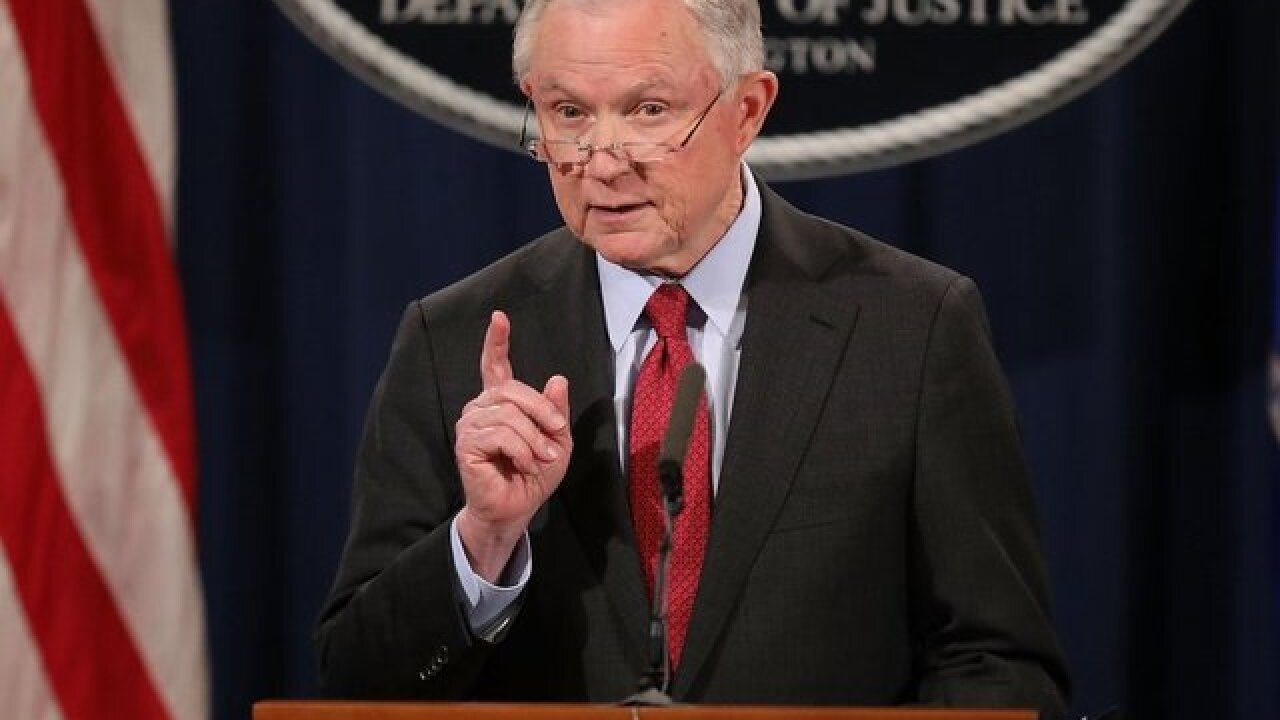 More than 600 members of the United Methodist Church have issued a formal church complaint against Attorney General Jeff Sessions, a fellow church member, charging that his "zero tolerance" policy on immigration violates church rules and may constitute child abuse.

Officially, the complaint charges Sessions with violating the United Methodist Church's Book of Discipline, its code of laws and social principles. Such charges could lead to a church trial, though few expect that to happen to the attorney general, the country's top lawman.

Instead, the 640 Methodists charging Sessions, who include both clergy and lay members, have asked for a "reconciling process that will help this longtime member ... step back from his harmful actions and work to repair the damage he is currently causing to immigrants, particularly families and children."

The complaint is addressed to the pastors at two churches Sessions attends, in Mobile, Alabama, and Clarendon, Virginia. It charges Sessions with violating church rules or principles on child abuse, immorality, racial discrimination and "dissemination of doctrines contrary" to those of the United Methodist Church.

"While other individuals and areas of the federal government are implicated in each of these examples," the complaint reads, "Mr. Sessions -- as a long-term United Methodist in a tremendously powerful, public position -- is particularly accountable to us, his church."

The complaint was reportedly spearheaded by the Rev. David Wright, a chaplain at the University of Puget Sound in Tacoma, Washington.

"The goal is to hopefully get Attorney General Sessions to talk to his pastors and church leaders, bring his position in line with the church's doctrines and social principles, and end the damage he is causing," Wright said.

Wright said he does not want Sessions to be removed from the church. "That would be a tragedy. We are a big-tent denomination."

Founded 50 years ago, the United Methodist Church has about 7 million members in the United States and is one of the country's most ideologically diverse Protestant bodies. Hillary Clinton and former President George W. Bush are both members.

The Rev. William Lawrence, a former professor at Perkins School of Theology and an expert on the United Methodist Church, said it would be "highly unusual" for any charges against Sessions to move beyond the stage of reconciliation, in which Sessions, his local pastor and his local bishop would seek a "just resolution" to settle the matter.

"In 50 years of the United Methodist Church, I am not aware of any complaint against a lay person moving beyond that stage," Lawrence said. Most often, church trials in recent years have been used for pastors who break church rules by officiating at same-sex weddings.

A spokeswoman for Sessions said the attorney general has no comment. Mary Catherine Phillips, a spokesperson for Bishop William Graves, who leads the area that includes Sessions' congregation in Mobile, Alabama, said he has no comment. Phillips noted that Graves released a statement on Monday decrying the "unjust acts" of separating children from their parents at the border. Sessions' United Methodist pastors in Alabama and Virginia, where he now lives, did not immediately respond for a request for comment.

Mark Tooley, a United Methodist and president of the conservative Institute on Religion & Democracy, called the charges a "publicity stunt."

"It's not going to go anywhere in terms of church action, but it is getting a lot of attention," Tooley said. "If they stopped to think about it, most United Methodists would probably be very troubled by the idea of that someone who dissented from the political statements of the church could be faced with a formal complaint or even expulsion."

Trump administration officials have said they do not want to separate children from their parents, but have also vigorously defended the policy over the last week as it has come under growing scrutiny and some religious groups have called for an end to the practice.

In a remarkable speech on Thursday, Sessions responded to the criticisms from "church friends," citing Romans 13, a passage in the New Testament that calls on Christians to obey secular authorities.

"I would cite you to the Apostle Paul and his clear and wise command in Romans 13, to obey the laws of the government because God has ordained them for the purpose of order."

On the last charge, the complaint accuses Sessions of "misuse of Romans 13 to indicate the necessity of obedience to secular law."

On the child abuse charge, the complaint says Sessions has advocated for and implemented "practices that indefinitely separate thousands of young children from their parents" and "holding thousands of children in mass incarceration facilities with little to no structured educational or socio-emotional support."

The US government has separated at least 2,000 children from parents at the border since implementing a policy that results in such family separations, the Department of Homeland Security confirmed Friday.

Doctors, religious leaders, the United Nations and politicians on both sides of the aisle have criticized the administration's use of family separations.

The president of the American Academy of Pediatrics told CNN the practice is "nothing less than government-sanctioned child abuse."