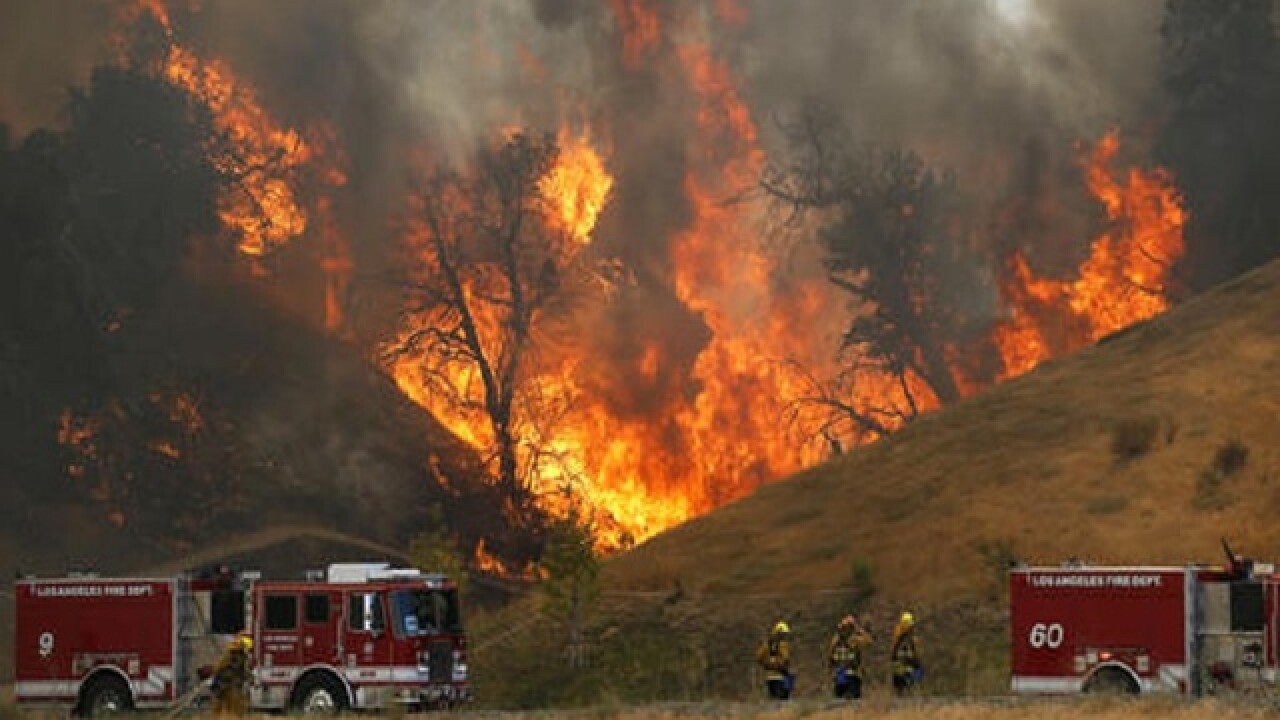 Nick Ut
<p>A hillside erupts in flame as a wildfire burns in Placerita Canyon in Santa Clarita, Calif., Monday, July 25, 2016. A raging wildfire that forced thousands from their homes on the edge of Los Angeles continued to burn out of control Monday as frustrated fire officials said residents reluctant to heed evacuation orders made conditions more dangerous and destructive for their neighbors. (AP Photo/Nick Ut)</p>

By: Associated Press
Posted at 10:44 PM, Jul 25, 2016
SANTA CLARITA, Calif. (AP) — The majority of some 20,000 people forced from their homes by a wildfire that exploded during the weekend were told they could return home Monday night, though an army of firefighters continued battling flames in the rugged hills and canyons northwest of Los Angeles.
Residents of two neighborhoods still under threat had to remain out of their homes, the U.S. Forest Service said, after a day when the fire grew only slightly to about 55 square miles (142.26 sq. kilometers). So far 18 residences were confirmed destroyed in the blaze that started Friday afternoon and quickly tore through drought-ravaged brush that hadn't burned in decades.
Laurent Lacore, a native of France who lives in Santa Clarita, was among those who evacuated on Saturday, the last of his family of four to leave as the fire bore down on his house.
"The flames were right behind our backyard," he said.
He returned Monday night delighted to find the house and everything around it had been saved, and could see a line of red fire retardant where a helicopter had stopped the fire's approach.
"Everything is fine," he said. "Even all of the trees are there."
Some 300 miles to the northwest a blaze in the scenic Big Sur region of the Central Coast had destroyed 20 homes and threatened 1,650 others as it burned 25 square miles (64.75 sq. kilometers), though firefighters made gains Monday and had it 10 percent contained.
The two blazes sent smoke as far away as Nevada, where officials issued air pollution warnings.
In Santa Clarita, the call for widespread evacuations brought frustration among fire officials as some residents refused the orders.
That meant firefighters having to help the holdouts to safety instead of putting out destructive flames, County Fire Chief Daryl Osby said.
Some firefighters "felt that they lost additional structures because they had to stop what they were doing to help citizens evacuate," Osby said.
U.S. Forest Service spokesman Justin Correll urged residents to leave quickly when evacuation orders are issued because their "property becomes secondary."
"We don't want firemen to become traffic directors," he said.
In Santa Clarita, 30 miles (48 kilometers) northwest of downtown Los Angeles, the fire broke out Friday, spreading through rugged mountains before making its way into canyons with sprawling neighborhoods.
By Sunday night, about 10 percent of Santa Clarita's 200,000 residents had been ordered out of their homes, before most were allowed to return Monday night.
The fire exploded Saturday like a "crazy storm," said Kara Franklin, who said sand driven by heavy winds hit her in the face as she tried to get a horse and donkey into a trailer so she could tow the animals away. From a ridgetop, she saw flames engulf a neighborhood.
When the blaze appeared to die down, she thought the worst was over and returned. Then it flared up again, and she and her son used a garden hose to put out embers that ignited spot fires on her property before fleeing.
"The heat was so intense," Franklin said Monday from a high school that had been turned into an evacuation center. "It was an inferno that was blazing ... just coming over the ridge."
A house two doors from hers was engulfed, providing a buffer that helped save her house.
Three Forest Service firefighters lost their homes at a remote fire station in the San Gabriel Mountains, including two who were fighting the fire at the time.
The fire destroyed film sets at Sable Ranch in Santa Clarita, which has Old West-style buildings used for movie locations. It also forced a nonprofit sanctuary for rescued exotic creatures to evacuate 340 of its more than 400 animals, including Bengal tigers and a mountain lion.
Investigators on Monday were trying to determine the cause of death of a man whose body was found in a car in the fire zone Saturday.
Nearly 3,000 firefighters were trying to put the Santa Clarita blaze out.
Firefighters saved about 2,000 homes in the fire's first three days, Los Angeles County Deputy Fire Chief John Tripp said.
One belonged to Ted Kellum, a defense contractor who moved in two years ago with his wife and four children. Kellum recalled Monday that he saw smoke pouring over a mountain ridge Friday and "scurried" with his family when a wall of flames and a cloud of smoke followed.
On Sunday, their 20-year-old son lied about going to see a girlfriend and instead crawled under a bridge and crept back into the neighborhood to check on their house.
Kellum and his wife, Helen, teared up as they recalled the joy of finding out the house they loved was still standing.
"It's like an Eden," Kellum said. "It's so beautiful except for the risk."
Copyright 2016 The Associated Press. All rights reserved. This material may not be published, broadcast, rewritten or redistributed.