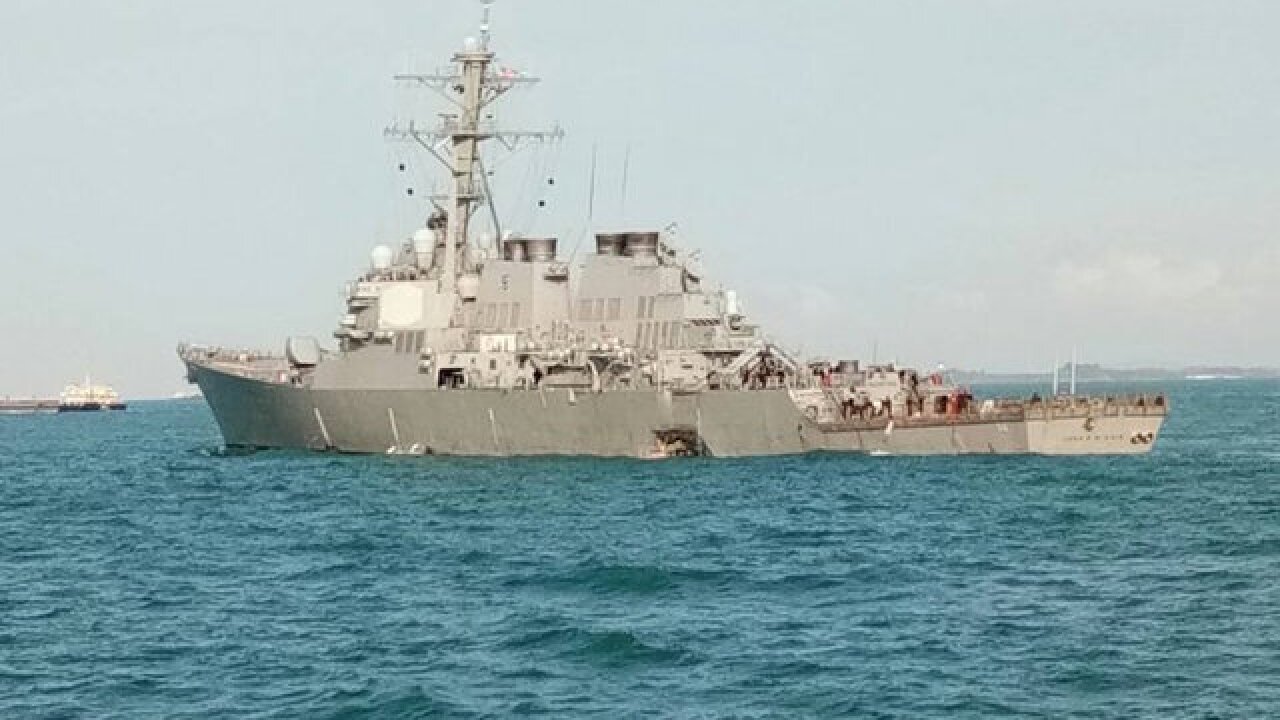 Copyright 2018 Scripps Media, Inc. All rights reserved. This material may not be published, broadcast, rewritten, or redistributed.
Twitter/@mykamarul
<p>USS John S. McCain with hole on side (8/21/17)</p>

A Navy spokesman, Capt. Greg Hicks, said the charges, which also include dereliction of duty and endangering a ship, will be presented to what the military calls an Article 32 hearing to determine whether the accused are taken to trial in a court-martial.

The disciplinary actions were decided by Adm. Frank Caldwell and are the latest in a series of moves the Navy has made in the aftermath of the deadly collisions, which investigators concluded were avoidable. It fired several top leaders, including the commander of the 7th Fleet, Vice Adm. Joseph Aucoin, and several other senior commanders in the Pacific.

One of the sailors killed aboard the McCain was Charles Findley, who was originally from the Kansas City area.

The Navy said it is filing at least three charges against four officers of the Fitzgerald, including the commanding officer, who was Cmdr. Bryce Benson at the time. Benson suffered a head injury in the collision and was airlifted to the U.S. Naval Hospital at Yokosuka, Japan. A Navy investigation found that Benson left the ship's bridge before the collision. Also facing charges are two lieutenants and one lieutenant junior grade, whose names were not disclosed. The Navy said all four face criminal charges, including negligent homicide, dereliction of duty and endangering a ship.

In a statement, Hicks said the announcement of charges Tuesday is "not intended to and does not reflect a determination of guilt or innocence related to any offenses. All individuals alleged to have committed misconduct are entitled to a presumption of innocence."

Hicks said that in addition to the criminal charges, additional administrative actions are being taken against unidentified members of both crews, including non-judicial punishment for four from the Fitzgerald and four from the McCain.

As a result of the two deadly accidents, at least eight top Navy officers, including the 7th Fleet commander, were fired from their jobs last year, and a number of other sailors received reprimands or other punishment that was not publicly released. Among the senior officers relieved of duty, in addition to Aucoin, were Rear Adm. Charles Williams and Capt. Jeffrey Bennett. Williams was the commander of Task Force 70, which includes the aircraft carriers, destroyers and cruisers in the 7th Fleet, and Bennett was commander of the destroyer squadron.

In a report released last November, the Navy concluded that the two crashes, as well as a third collision in May and a ship grounding, were all avoidable, and resulted from widespread failures by the crews and commanders who didn't quickly recognize and respond to unfolding emergencies.

A second report called for about 60 recommended changes to address the problems. They ranged from improved training on seamanship, navigation and the use of ship equipment to more basic changes to improve sleep and stress management for sailors.

The extensive training and leadership failures prompted the top Navy officer, Adm. John Richardson, to order all naval commanders around the world to review their staffs and ships to see if they had similar problems.

The Navy's investigation of the two collisions found that in addition to bad judgment, the crews were not adequately prepared.

"In the Navy, the responsibility of the Commanding Officer for his or her ship is absolute," it said. "Many of the decisions made that led to this incident were the result of poor judgment and decision making of the Commanding Officer. That said, no single person bears full responsibility for this incident. The crew was unprepared for the situation in which they found themselves through a lack of preparation, ineffective command and control, and deficiencies in training and preparations for navigation."