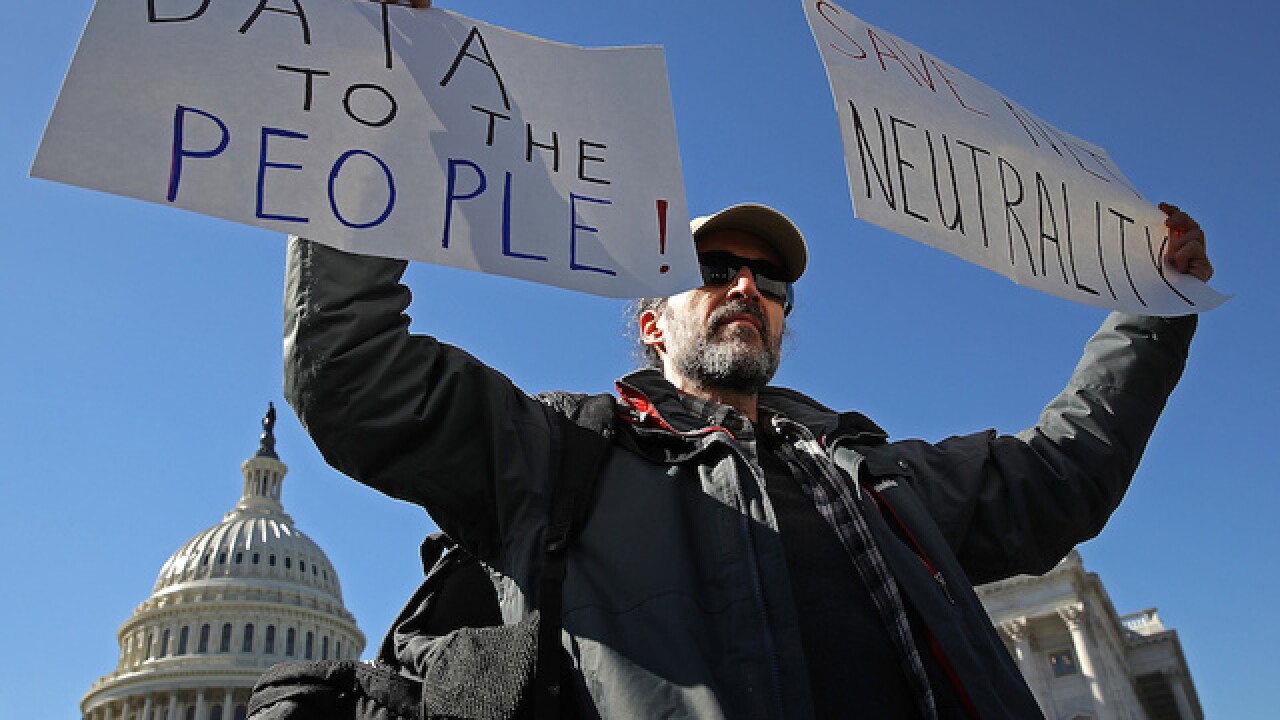 Copyright Getty Images
Win McNamee
<p>WASHINGTON, DC - FEBRUARY 27: Mike Adkins joins roponents of an open and unregulated internet while attending a news conference at the U.S. Capitol February 27, 2018 in Washington, DC. Today has been designated a "net neutrality day of action"by proponents of the legislation. (Photo by Win McNamee/Getty Images)</p>

The end of net neutrality is now scheduled for next month.

The Federal Communications Commission said in a notice filed Thursday that new rules repealing the net neutrality protections are set to take effect 30 days from this Friday, or June 11.

"Now, on June 11, these unnecessary and harmful internet regulations will be repealed and the bipartisan, light-touch approach that served the online world well for nearly 20 years will be restored," Ajit Pai, chairman of the FCC, said in a statement Thursday.

The Republican-led FCC voted along party lines in December to repeal the Obama-era net neutrality rules, which were intended to prevent internet providers from blocking, speeding up, or slowing down access to specific online services.

The FCC previously said that parts of the repeal order would take effect on April 23. The rest of the order required the approval of the Office of Management and Budget, which the FCC says it received earlier this month.

Senate Democrats are currently pushing for a vote on a bill to overturn the decision as soon as next week. Even if the resolution passes the Senate, it still faces an uphill battle in the House.

Gigi Sohn, a counselor to former FCC chairman Tom Wheeler, recently told CNN that the future of net neutrality will likely "stay murky" through the remainder of this calendar year, "at the very least."

More than 20 states have filed a lawsuit to stop the net neutrality repeal. Several states, including New Jersey, Washington, Oregon and California, have gone so far as to push legislation to enforce the principles of net neutrality within their borders.

This local legislation could lead to a legal showdown, however.

A spokeswoman for the FCC previously directed CNNMoney to a section of the final order for net neutrality, in which the FCC asserts authority to prevent states from pursuing laws inconsistent with the net neutrality repeal.

"You do have a number of states who have passed rules and they haven't really implemented them because if they do they will be sued by the operators.

"It's patently illegal for the states to make their own internet policy," says Roslyn Layton, a visiting scholar at the American Enterprise Institute who served on President Trump's transition team for the FCC.

Layton expects telecommunications companies will sue the states if they try to enforce the protections.