Nikki Haley tells UN that US 'locked and loaded,' prepared to maintain pressure on Syria 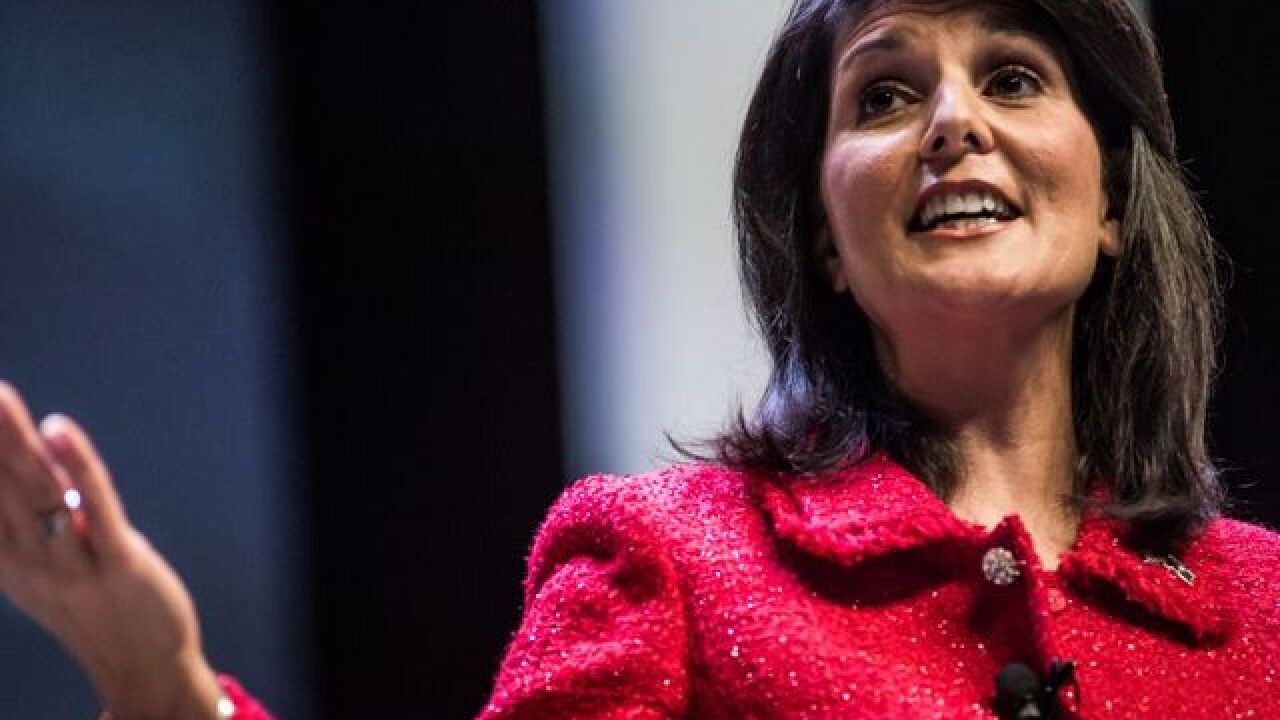 US Ambassador to the United Nations Nikki Haley said the United States was prepared to sustain its pressure on Syria after a night of military strikes meant to cripple the country's ability to use chemical weapons, as Russia accused Washington of "hooliganism" and a major breach of international law.

"The time for talk ended last night," Haley told the UN Security Council. "We are prepared to sustain this pressure, if the Syrian regime is foolish enough to test our will.

Haley blasted Russia for protecting Syria and said Moscow has emboldened Syrian President Bashar al-Assad's regime to continue its attacks, while the Russian ambassador to the UN said Washington had embarked on an "illegal military adventure."

"We cannot stand by and let Russia trash every international norm that we stand for, and allow the use of chemical weapons to go unanswered," Haley told the Council.

Russian Ambassador Vassily Nebenzia quoted President Vladimir Putin and said that in conducting the strikes, the US, United Kingdom and France had acted "without a mandate from the UN Security Council and in violation of the UN charter and the norms of international law."

"An aggression of a sovereign state was carried out, which is on the front line of the fight against terrorism," Nebenzia said.

As the two sides traded barbs, UN Secretary General Antonio Guterres urged an end to military action and a turn to diplomacy.

"Syria today represents the most serious threat to international peace and security," Guterres told the Security Council, which held an emergency meeting Saturday morning at Moscow's request. "There is no military solution to the crisis. The solution must be political."

The French and British ambassadors to the UN proposed conditions that could allow for a negotiated end to the conflict, which has raged since March 2011, with French Ambassador Francois Delattre directly asking Russia to cooperate.

"Her country, is ready, is 'locked and loaded,'" said Bolivia's ambassador to the UN, Sacha Sergio Llorenty Soliz. "Of course, we clearly heard her words with a great deal of concern and a great deal of sadness. We know that the United States has aircraft carriers, that they have satellites, that they have 'intelligent missiles, smart bombs,' they have a huge arsenal of nuclear weapons.

"And we also know that they have nothing but scorn for international law, but we have this (hold up UN Charter)," Soliz said. "We have the principles and purposes of the United Nations charter, and ultimately, as history has demonstrated many times, ultimately these principles will prevail."

The US, UK and France launched coordinated strikes against three Syrian sites in retaliation for the an alleged chemical weapons attack on civilians in the last rebel stronghold of Douma, leaving at least 49 people dead. Images of children gasping for air shocked the world and galvanized the White House.

"I ordered the United States armed forces to launch precision strikes on targets associated with the chemical weapon capabilities of Syrian dictator of Bashar al-Assad," US President Donald Trump said late Friday at the White House. As he spoke, witnesses in the Middle East said they heard explosions in Damascus, and photographs showed missiles streaking over the Syrian night sky.

The allies struck a scientific research center located in the greater Damascus area, and two sites near Homs. US Defense Secretary James Mattis said "right now this is a one-time shot and I believe that it sent a very strong message" to the Syrian regime.

While Haley focused on themes of Russian obstructionism and American resolve to strike as needed, the British and French ambassadors emphasized an interest in pursuing talks to ease tensions.

The UK, US and France "will continue to pursue a diplomatic resolution," UK Ambassador to the UN, Karen Pierce, told the Security Council. She laid out four conditions, saying that:

Delattre, the French ambassador, added that the destruction of Syria's chemical program has to happen in a "verifiable and irreversible" way.

"We must spare no effort to set up an international attribution mechanism, prevent impunity, and stop any repeat attempts by the Syrian regime," he said before laying out three other "imperatives."

They included the defeat of ISIS, a ceasefire throughout Syrian territory with "full and unfettered" humanitarian access, and a crisis exit strategy that incorporates a lasting political solution.

"We can only resolve the Syrian crisis once and for all if there is an inclusive political solution," Delattre said. "We have called for this for seven years," he added. "It has never been so urgent. Only this roadmap will allow us once and for all to get out of this stalemate."

Delattre echoed both Pierce and Haley in saying that France has "absolutely no doubt about the Assad regime's accountability for this attack."

But Nebenzia maintained the Russian argument that the US and its allies had "used as a pretext a staged chemical attack" in order to target Syria. He claimed that "Russian military experts did not find any trace of" chemical weapons at the site, which is now under the control of the Syrian regime.

"Not a single resident was able to confirm a chemical attack took place," he argued, saying that the US, UK and France hadn't bothered to wait for an investigation and instead had rushed to judgment "in a sign of cynical disdain a group of western countries."

Haley, who spoke after the Russian, was disdainful.

"We can all see that a Russian disinformation campaign is in full force this morning, but Russia's desperate attempts at deflection cannot change the facts," she said. The attack, she said, was justified and based on facts.

"A large body of information indicates that the Syrian regime used chemical weapons in Douma on April 7th," Haley said. "There is clear information demonstrating Assad's culpability," she said.

"The pictures of dead children were not fake news," Haley said. " They were the result of the Syrian regime's barbaric inhumanity."

"The United Kingdom, France, and the United States acted, not as revenge, not as punishment, not as a symbolic show of force," she said. "We acted to deter the future use of chemical weapons by holding the Syrian regime responsible for its atrocities against humanity."

Haley pointed to Russia's six vetoes in the Security Council to protect Syria from condemnation or resolutions meant to address chemical weapons, as well as its move in November to shut down a UN body created to investigate chemical weapons attacks in Syria. Those acts have made Moscow complicit in the abuses the Syrian regime has conducted against its own people, she said.

"While Russia was busy protecting the regime, Assad took notice," she said. Syria "knew it could act with impunity, so it did ... in complete violation of international law."

Haley promised the US would stand ready to act again.