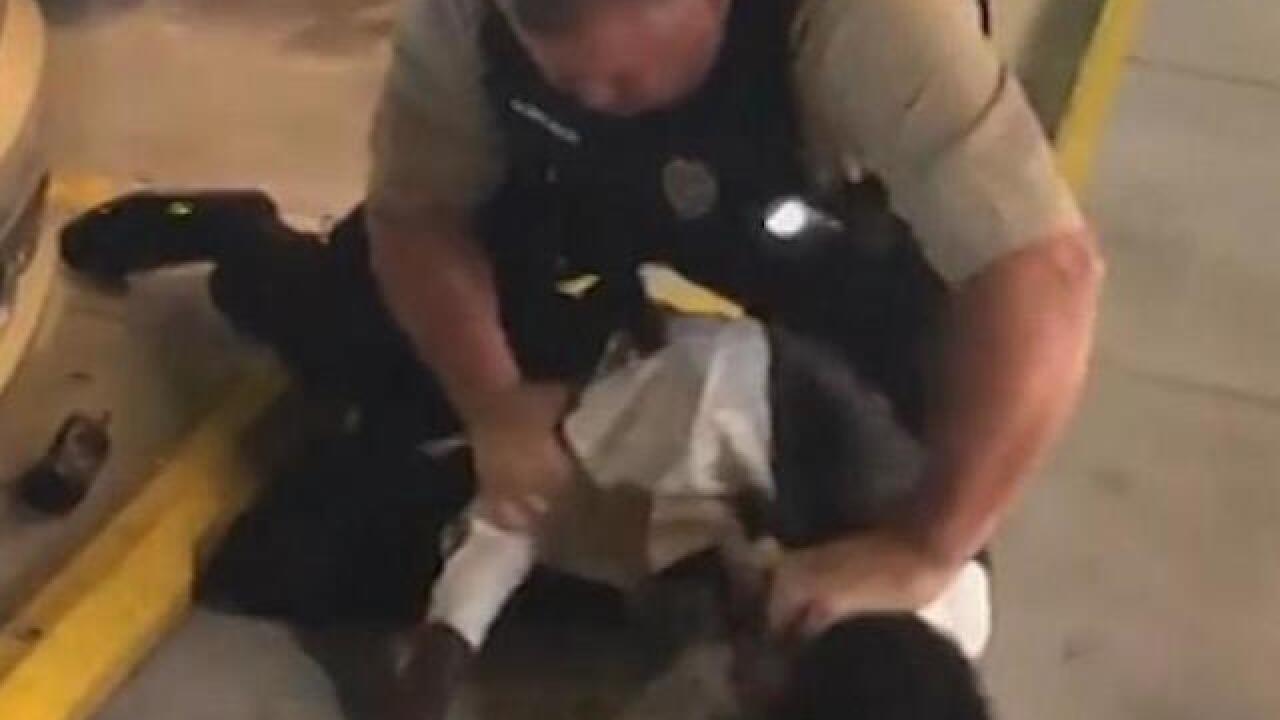 Anthony Wall's night started at the prom with his sister, followed by a food stop at a Waffle House in North Carolina. While at the restaurant in Warsaw, he got into a heated argument with employees, who called the police.

The ensuing incident Saturday was captured on cell phone video that was widely shared on Facebook.

It shows an officer putting his hand around Wall's neck and shoving him up against a glass wall as he tries to arrest him.

Wall screams, "get your hands off me!" as the officer throws him to the ground and handcuffs him. It's unclear what happened moments before the confrontation.

Police and the State Bureau of Investigation are investigating the incident.

Warsaw Police Chief Eric Southerland declined to name the officer, but said he responded to the restaurant for a fight in progress.

Wall had just attended prom as a date for his 16-year-old sister, CNN affiliate WTVD reported. He was charged with disorderly conduct and resisting arrest.

A second video posted by the television station shows Wall and his younger sister, who's still in her prom dress, yelling in the restaurant.

"We are looking into the incident ... to gather all the facts," said Pat Warner, a spokesman for Waffle House. "Initial reports say the customer became agitated, and the police were called."

Wall said he takes full responsibility for his interaction with Waffle House employees, but added that he felt the officer used excessive force.

"I was pretty much trying to scream for air and trying to breathe because he was holding my throat. That's when I got aggressive with him because you are choking me," he told the affiliate.

Three weeks earlier, police wrestled a black woman to the ground at a Waffle House in Alabama, leaving her breasts exposed during the scuffle.

"Once again this incident was sparked when a Waffle House employee called the police after the patron allegedly complained about customer service. And once again the police responded with violence."

In the Alabama incident, a woman questioned why she was charged extra for plastic utensils, Ifill said. The customer got into an argument with employees and the situation spiraled out of control after police were called, the NAACP official said.

Ifill is urging the Waffle House to review and overhaul its policies to ensure employees do not subject customers to unnecessary police contact and brutality.

The incident drew comparisons to last month's arrest of two men at a Philadelphia Starbucks as they waited for a friend to arrive. After that incident, Starbucks will shut down its stores for a day to train employees on racial bias.