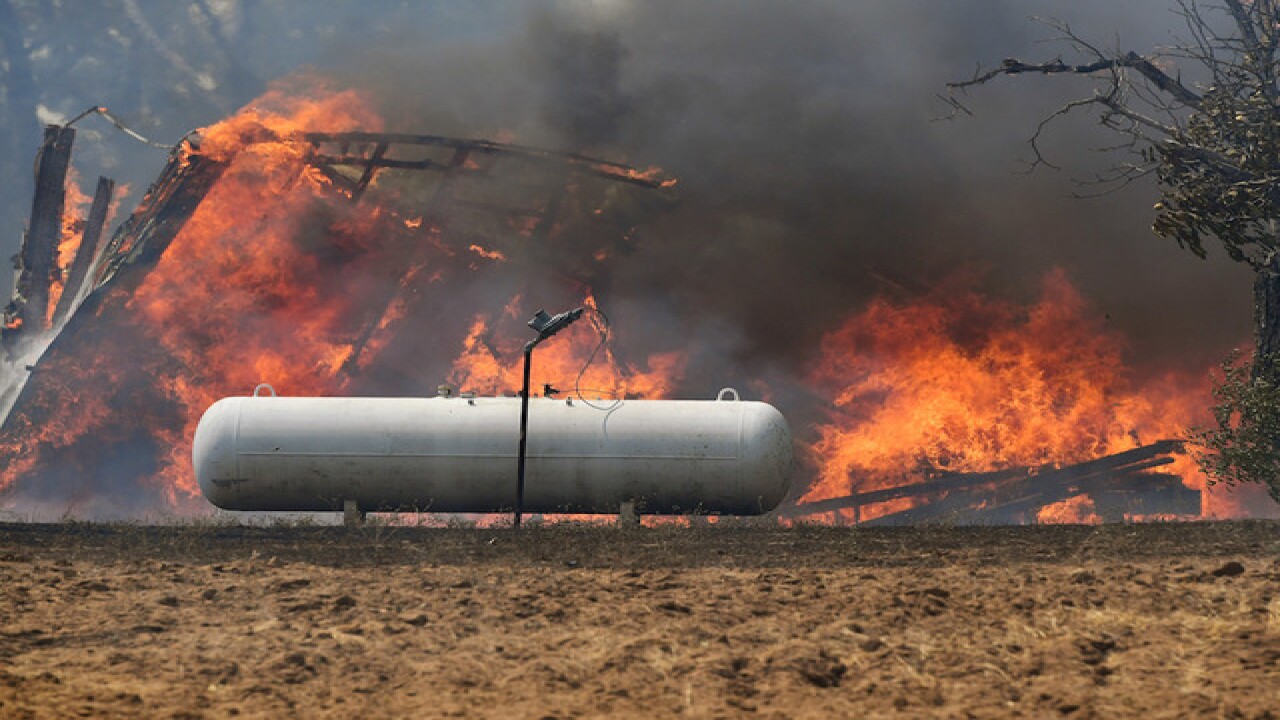 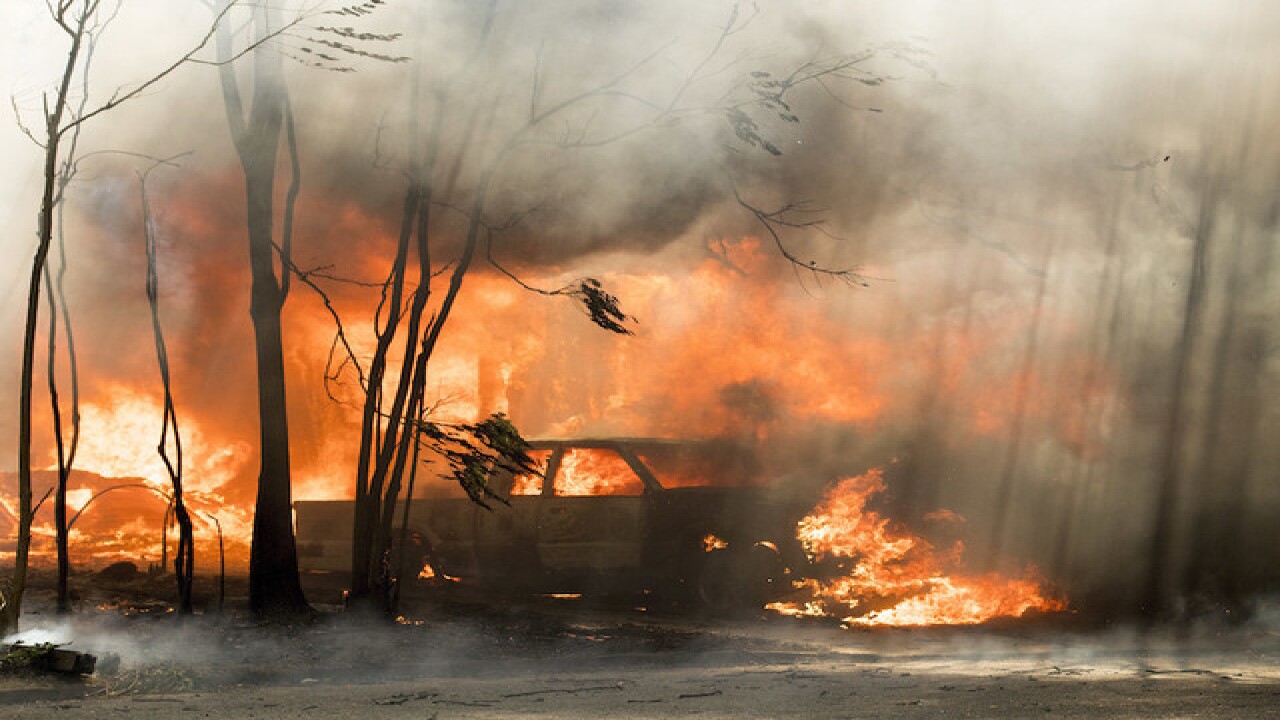 The fire seemed calm Sunday before gusts kicked up the flames that tore through neighborhoods in Lower Lake, a town of 1,200 about 90 miles north of San Francisco, officials said. It reached Main Street and burned the post office, a winery, a Habitat for Humanity office and several businesses as thick, black smoke loomed over the small downtown strip.

Staff at a hospital in Clearlake, a neighboring town of about 15,000, rushed to transfer 16 patients to another hospital and firefighters carried goats and other animals to safety as homes burned around them.

The blaze was one of 11 large wildfires in California, where high temperatures and parched conditions brought on by a five-year drought raised the fire danger. In central California, a day-old wildfire burned 20 structures and threatened 150 homes.

The Lower Lake fire broke out Saturday afternoon and exploded to nearly 5 square miles as it fed on bone-dry vegetation. Besides the wind, 100-degree heat hindered firefighters struggling to get a handle on the largely out-of-control blaze.

"This fire roared through the city like a wave of water — it was a wave of fire that came through here," said Lt. Doug Pittman, a Marin County sheriff's spokesman working on behalf of the California Department of Forestry and Fire Protection.

Well over 100 homes were destroyed, Cal Fire spokesman Daniel Berlant said Monday. Officials did not immediately know how many businesses and other buildings were lost but say thousands are still threatened.

No one was injured, and officials were hopeful the wind won't pick up again like it did the day before.

Residents who thought the fire was under control earlier Sunday went on errands in town and came back to roaring flames and smoke. Some used hoses or water from their pools to try to protect their houses.

Rick Davis, 40, told the http://bit.ly/2aTNOdKSan Francisco Chronicle that he went to lunch in Lower Lake and rushed home when he heard the fire exploded. He used a hose to wet down his roof.

Nearby, Garrett Reed, 43, made similar preparations.

"If I see embers and ash rain down, I will turn the sprinklers on the roof and get out," he told the newspaper. "But this is my grandfather's house, and I'm not going to lose it."

Phaedra Phelps had the same thought after hearing the flames roared to life and rushed back from the store Sunday.

"My daddy bought this house for me 18 years ago," Phelps told the Press Democrat newspaper in Santa Rosa. "I'm staying here. This is my home. Unless my home is on fire, I'm not going anywhere."

The fire shifted into Lower Lake after creating its own weather pattern, said Suzie Blankenship, a Cal Fire spokeswoman. Tragically, the burned Habitat for Humanity office had been raising money to help rebuild homes destroyed by one of the state's most destructive blazes nearly a year ago.

"Emotions are still incredibly raw from the Valley Fire," state Sen. Mike McGuire said about last year's wildfire, which killed four people and destroyed more than 1,300 homes. "I don't think any of us thought we'd be back where we are tonight."

In central California, similar conditions led the wildfire near Lake Nacimiento, about 180 miles northwest of Los Angeles, to explode from 2 to nearly 7 square miles Sunday, Cal Fire spokesman Bennet Milloy said. The blaze shifted north toward the lake, leading authorities to evacuate some residents by boat.

In Southern California, forecasters warned of high fire danger due to a heat wave and gusty winds.