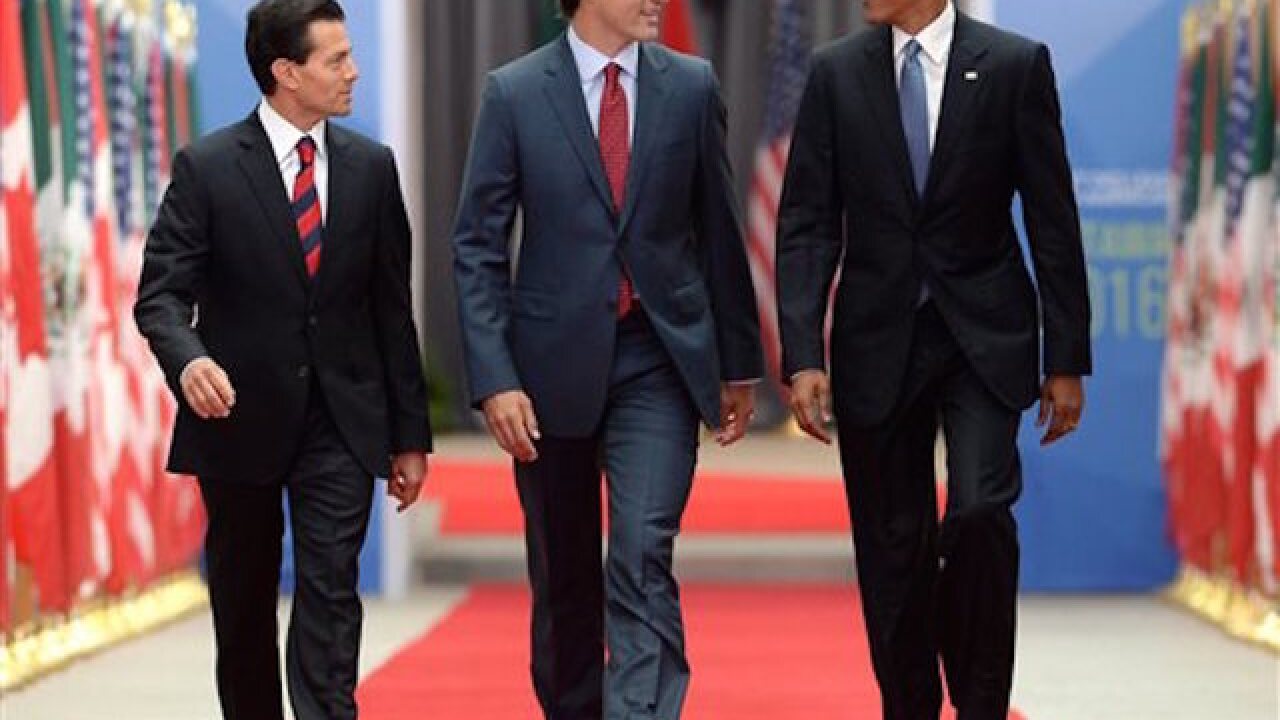 OTTAWA, Ontario (AP) — The leaders of the United States, Canada and Mexico pushed back Wednesday on calls for walling off their nations from free trade, arguing that more commerce with the outside world is inevitable and will deliver measurable benefits for their citizens.

President Barack Obama's meetings with Canadian Prime Minister Justin Trudeau and Mexican President Enrique Pena Nieto come at a time of growing isolationist sentiments, not only in North America. Britain's decision to exit the 28-member European Union has brought to the forefront concerns in many nations that the forces of globalization are having negative effects on their local economies and lifestyles.

"The integration of national economies into a global economy, that's here. That's done," Obama said. He argued that instead of withdrawing from the rest of the world, advanced countries needed to focus on higher standards, wages and legal protections that would ensure the benefits of globalization are widely felt.

"We can't disengage, we ought to engage more," he added.

The leaders spoke at a joint news conference in the Canadian capital during an annual North American Leaders' Summit. Obama also planned to address the Canadian Parliament during his visit, becoming the ninth American leader to do so and the first since Bill Clinton in 1995.

Though Britain's exit from the EU, or Brexit, has rattled the global financial system, Obama said he believed the markets were starting to settle down. Still, he acknowledged there would be "genuine longer-term concerns" about global economic growth "if, in fact, Brexit goes through."

Obama said his primary message to British Prime Minister David Cameron and to German Chancellor Angela Merkel, who is largely spearheading Europe's response, was that "everybody should catch their breath." Though Merkel and other European leaders have urged Britain to start its withdrawal quickly, Obama called for a thought-out process that would be transparent and clearly understandable to all of Europe's citizens.

"I think that will be a difficult, challenging process, but it does not need to be a panicky process," the president said.

The Canadian and Mexican leaders largely echoed Obama's calls for staying focused on closer economic ties. Pena Nieto said Mexico sees opportunity for growth and investment by broadening its relationship with the rest of the continent.

"We are competitors, yes, but we have complimentary economies, and that will give more development to our society," he said.

And Trudeau said the three leaders' strategy for combatting protectionist views was to "highlight how much trade and positive agreement among our nations are good not only for the economy of the world and the economy of our countries, but it's also good for our citizens."

In the U.S., the global concerns about the effects of globalization have coincided with the rise of Donald Trump, the presumptive Republican presidential nominee. Trump has lambasted Obama's free trade negotiations and pledged to withdraw from a major free trade deal with Asia. This week, he also blamed globalization for the loss of millions of manufacturing jobs and threatened to extricate the U.S. from the North American Free Trade Agreement, in effect since 1994.

Trump also has blamed many of America's challenges on an influx of immigrants and threatened to build a wall on the Mexican border, in a sharp rebuke of Obama's calls for allowing millions of immigrants in the U.S. illegally to stay.

Obama said anti-immigrant sentiments had emerged in the U.S. before, but didn't stop immigrants from seeking out the opportunities the U.S. provides. He suggested he wasn't concerned that Americans by and large would follow Trump down a path of xenophobia.

"You shouldn't think that is representative of how the American people think," he said.

Ahead of the summit, Trudeau and Pena Nieto announced measures to reduce barriers during the Mexican leader's state visit to Canada. Trudeau said Canada will lift visa requirements for Mexican visitors as of December 2016. Pena Nieto agreed to open Mexican markets to Canadian beef.

Efforts to curb global warming were a big part of the summit. The leaders pledged to rely on renewable energy to generate 50 percent of North America's electrical power by 2025. Mexico also committed to joining the United States and Canada in tackling methane emissions.