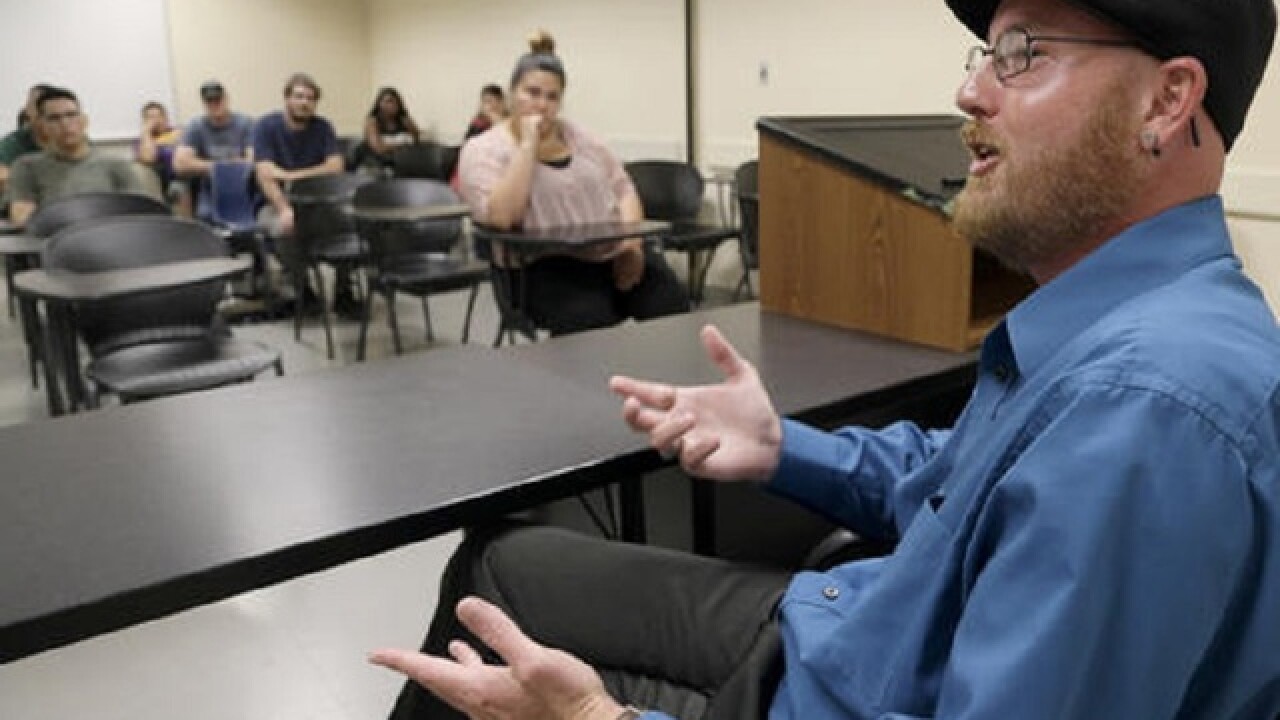 Nick Ut
<p>Ryan Reyes, whose partner Daniel Kaufman was killed in the San Bernardino, Calif., terrorist attacks, speaks to students at California State University in San Bernardino, Monday, June 6, 2016. Reyes encouraged tolerance in the wake of the shooting six months ago and said his anger has shifted from the attack to how the nation has responded. (AP Photo/Nick Ut)</p>

By: Associated Press
Posted at 12:31 AM, Jun 07, 2016
SAN BERNARDINO, Calif. (AP) — A man whose boyfriend was killed in the San Bernardino terror attack criticized Donald Trump's suggestion that Muslims be banned from entering the U.S. and encouraged tolerance in the wake of the shootings.
Speaking to students Monday in a "Terrorism in the 21st Century" class at California State University, San Bernardino, Ryan Reyes said his anger has shifted from the attack to how the nation has responded. He said the Muslim community should not be blamed for the actions of radical groups.
"A ban on anybody based on something like that, I was appalled that that notion even came up," Reyes said of Trump's Muslim ban proposal.
Reyes' boyfriend Daniel Kaufman ran a coffee shop at the social services center where Syed Rizwan Farook and his wife Tashfeen Malik killed 14 people at a holiday gathering last Dec. 2. Investigators say the attackers had been radicalized for at least two years.
Soon after the attack, Trump called for a "total and complete shutdown of Muslims entering the United States" — immigrants and visitors alike — because of what he describes as hatred among large segments of the Muslim population toward Americans.
Reyes, 33, began urging tolerance toward Muslims soon after the attack. He appeared frequently in the national media and was invited by President Obama as a guest to the State of the Union address.
Reyes said he was encouraged to speak out in part because of his own encounters with hate and intolerance as a young gay man. In the months after the attack, he largely retreated from the glare of television cameras to grieve.
"I've gotten over the anger part of it in the grieving stage," he said. "Now it's just more disappointment in the way our country is handling themselves."
Ryan spoke to an audience of students planning careers in law enforcement, counter-terrorism and criminal justice. Professor Brian Levin has invited other speakers, including a SWAT team member, journalists and others who responded to the San Bernardino attack. to address the class.
The campus is located about 10 miles north of Inland Regional Center, where the shooting took place.
"I think it's important not just to get subject matter experts, but people who have lived through this terrible, violent tragedy but still exhibit compassion, grace and poise," Levin said.
Levin is the director of CSU San Bernardino's Center for the Study of Hate and Extremism, a non-partisan research and policy center. He said his organization found that the number of hate crimes against Muslims in the U.S. nearly tripled in the month after the Paris terror attack that killed 130 people.
Reyes and Kaufman had been a couple for three years. Reyes said he did not have a lot of exposure to the Muslim community before the attack, and said he still knows relatively few Muslims today. But he recalled how a few Muslim neighbors came to express their condolences after the shooting.
"One of the first things I said to them was, I apologized on behalf of the entire nation, on how they were going to be treated," he said.
Students asked Reyes about what he plans to do to fight Islamophobia and how he is finding strength after Kaufman's death.
He said he hoped people with hateful attitudes against Muslims hear his message and think, "There's the loved one of one of the victims. If he can feel this way about it, why do I have that much hate?"
Copyright 2016 The Associated Press. All rights reserved. This material may not be published, broadcast, rewritten or redistributed.