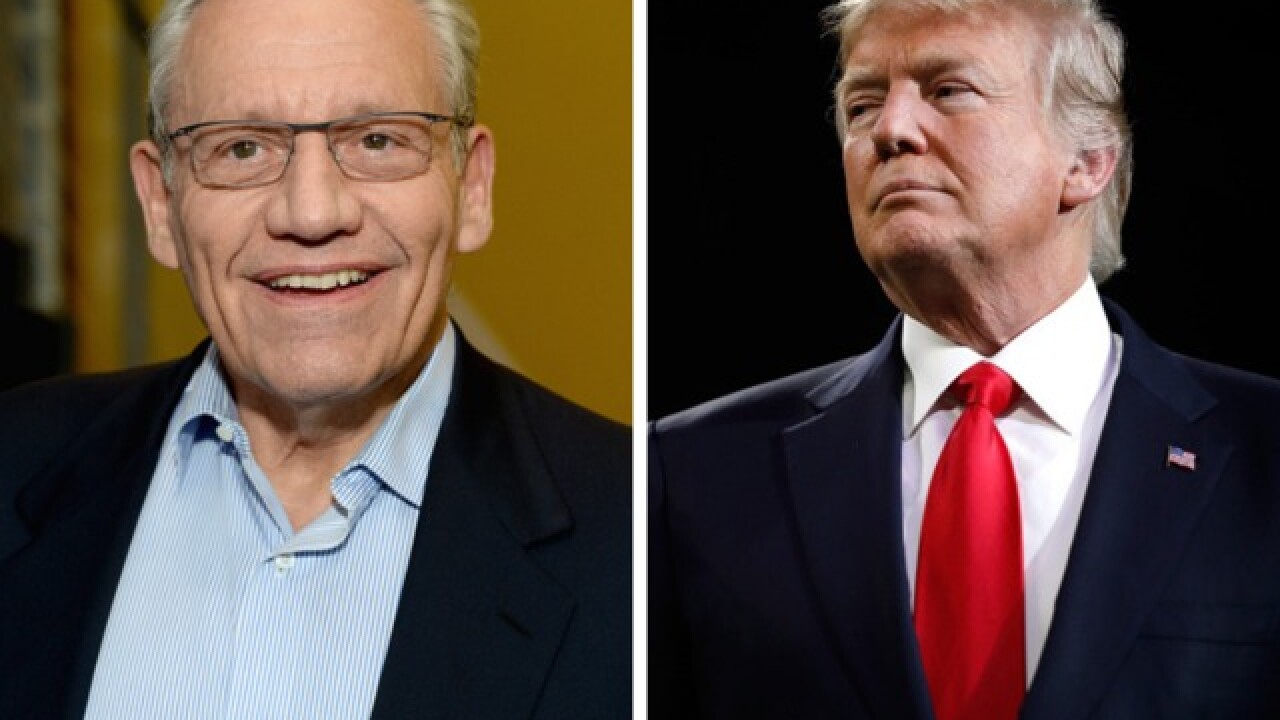 President Donald Trump called journalist Bob Woodward on August 14, CNN has learned, apparently because the President was alarmed by reports that Woodward is publishing a new book about him.

Woodward recorded the call with Trump's permission and CNN obtained a full transcript of the conversation. The Washington Post first reported on the 11-minute call.

Trump has been complimentary of Woodward in the past, and initially his manner was friendly. Woodward explained that he's disappointed Trump didn't sit down for an interview for the book and said he put in several requests.

At first, Trump said he didn't know anything about it.

"It's really too bad, because nobody told me about it," Trump said. "You know I'm very open to you. I think you've always been fair."

Woodward then told the President he requested an interview through about six people, including aides and Republican senators. "I'm sorry we missed the opportunity to talk for the book," Woodward said, later adding, "I maximized my effort."

"They don't tell me," Trump replied, indicating no one relayed the request.

But within a few minutes, Trump changed his story. An extraordinary exchange followed as Trump asked Woodward to name the people he contacted.

"I talked to Kellyanne (Conway) about it two-and-a-half months ago," Woodward responded, saying he discussed the book with the White House counselor over lunch.

Woodward also said he put in a request through White House deputy press secretary Raj Shah, but never heard back.

"Well, a lot of them are afraid to come and talk -- or, you know, they are busy. I'm busy," Trump answered.

After several more minutes, including a long tangent from the President taking credit for the strong economy, Trump asked, "Who were the senators?"

"Sen. (Lindsey) Graham said he had talked to you about talking to me," Woodward replied, then asked, "Now, is that not true?"

In an about-face, Trump then made a critical admission: "Senator Graham actually mentioned it quickly in one meeting," he said. "That is true. That is true."

Woodward explained his method of reporting to Trump, including meeting with White House sources and getting documentation. Then, he told the President directly that the book is "a tough look at the world and your administration and you."

Trump began to bristle but tried to joke. "Well, I assume that means it's going to be a negative book," he said. "But you know, I'm sort of 50% used to that."

As the conversation continued, Trump revealed Conway had walked into the Oval Office. He put her on the phone with Woodward.

"Why don't you speak to Kellyanne. Ask her. She never told me about it," Trump said.

Conway acknowledged, "I put in the request. But you know, they -- it was rejected. I can only take it so far."

It was a surreal moment, since Conway has direct access to the President.

"I presented it to the people here who make those decisions, but ..." Conway added.

"Who are the people?" Woodward interrupted.

Conway didn't answer. "Anyway, I'll give you back to the President."

Trump got back on the phone and complained that Woodward didn't contact him directly. "It would've been nice, Bob, if you called for me, in my office. I mean, I have a secretary. I have two, three secretaries."

Woodward repeated that he made multiple requests, as Trump's annoyance appeared to increase.

"We're going to have a very inaccurate book, and that's too bad," Trump said.

Woodward immediately responded, "No, it's going to be accurate, I promise."

"I believe in our country," Woodward said. "And because you're our President, I wish you good luck."

"OK," Trump concluded. "Thank you very much, Bob. I appreciate it. Bye."

Woodward's book relies on hundreds of hours of taped confidential background interviews and dozens of sources in Trump's inner circle, as well as documents, files, diaries and memos, including a note handwritten by Trump himself.

Woodward's reporting brings a credibility that distinguishes this book from previous efforts on Trump. The author and Washington Post journalist has won two Pulitzer Prizes, including one for his coverage of the Watergate scandal that led to President Richard Nixon's resignation.

"Fear: Trump in the White House" is set for release September 11.