Pompeo courts skeptical lawmakers in bid to be top US diplomat 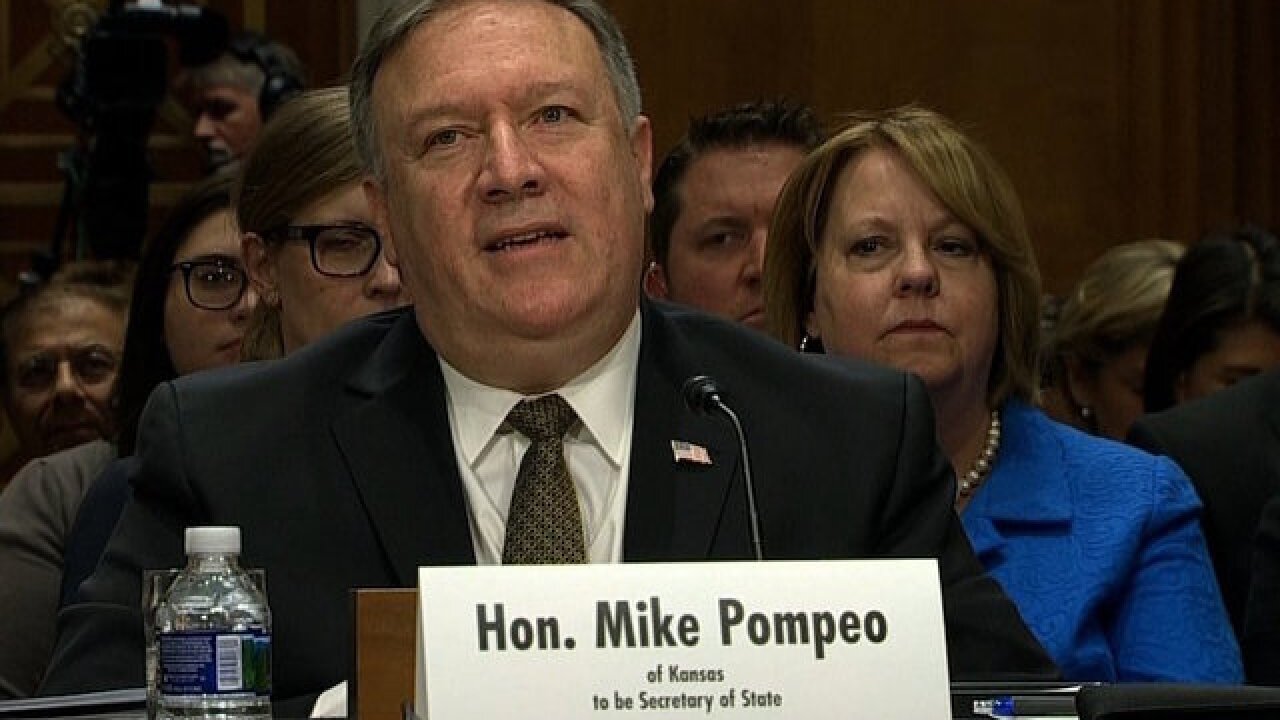 Copyright Getty Images
Pool
<p>Mike Pompeo, the Trump administration's nominee to lead the State Department, made his case for confirmation on Thursday, stressing his service in the military and at the CIA to skeptical lawmakers, and emphasizing the unique place the US holds in the world.</p>

Mike Pompeo, the Trump administration's nominee to lead the State Department, made his case for confirmation on Thursday, stressing his service in the military and at the CIA to skeptical lawmakers, and emphasizing the unique place the US holds in the world.

"America is uniquely blessed, and with those blessings comes a duty to lead," Pompeo said. "As I have argued throughout my time in public service, if we do not lead the calls for democracy, prosperity, and human rights around the world, who will? No other nation is equipped with the same blend of power and principle."

The CIA Director, now seeking to become the 70th US secretary of state, is facing an uphill battle at his confirmation hearing before the Senate Foreign Relations Committee, where one Republican and some Democrats are expected to oppose him. Even if Republican leaders take special measures to move his nomination to the broader Senate, the former House lawmaker still faces a tight vote.

Pompeo clearly had those concerns and the voting math in mind as he began what was expected to be a day-long appearance before the committee. But his appearance took a quick turn from foreign policy issues to the domestic, when Sen. Robert Menendez, the leading Democrat on the committee, took the opportunity to press Pompeo on President Donald Trump and the special counsel investigation into links between Russia and the Trump campaign.

Menendez asked if Trump had ever asked him to "interfere" in the probe by special counsel Robert Mueller.

Pompeo said he had been interviewed by Mueller, and is cooperating with special counsel.

Pompeo refused to discuss his conversations with the President, but said that Trump has "never asked me to do anything I consider improper." When Menendez pressed Pompeo several times about conversations he has had with Mueller, Pompeo said, "I think it is most appropriate that while the investigations continue, I not speak to the conversations I've had with the various investigative bodies."

He added that "there should be no negative inferences or for that matter positive inferences ... that while these investigations continue I not speak to" any of the conversations he had with Trump.

He declined to say if the President asked him to do anything about the Comey probe and could not "recall" the nature of a March 2017 conversation where Trump reportedly asked Pompeo to get Comey to pull back.

Excerpts of Pompeo's opening remarks made clear that he will promise to push a hard line on Russia, avoid past mistakes with North Korea, raise the costs for Iran's "dangerous behavior," and rebuild the State Department.