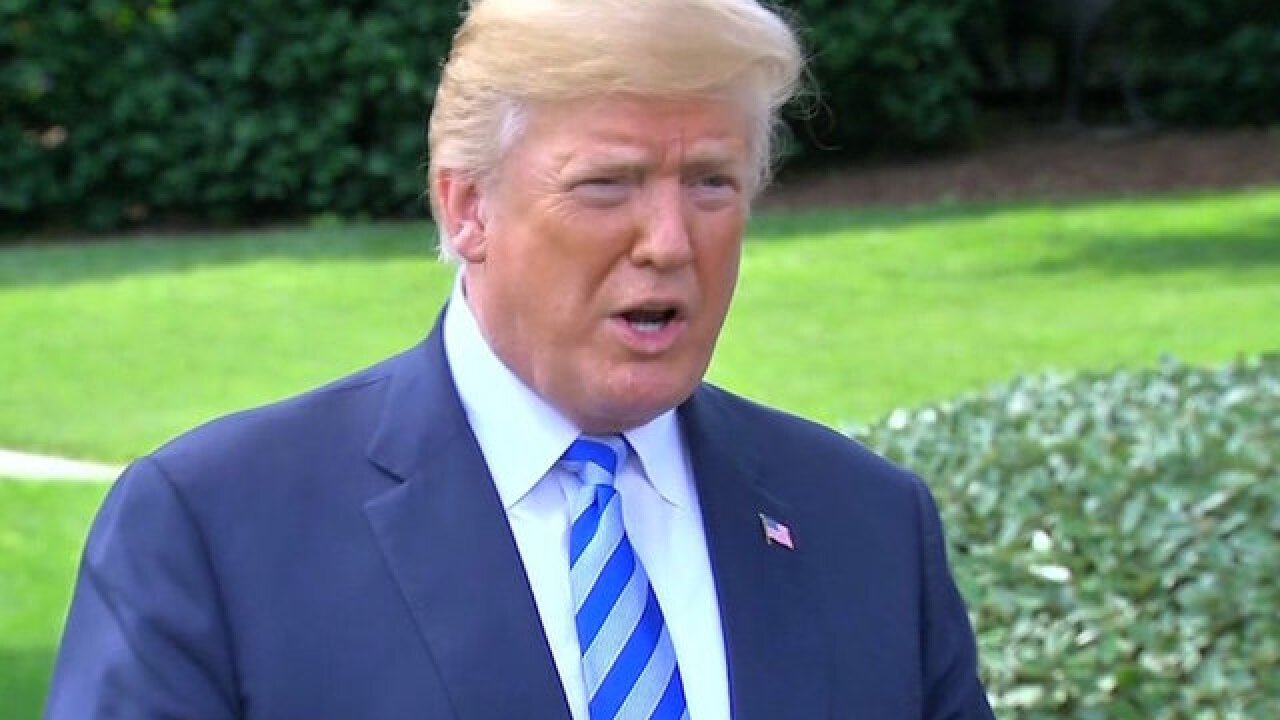 © 2018 Cable News Network, Inc.
Pool
<p>The White House has assembled the paperwork to pardon dozens of people, two sources with knowledge of the developments tell CNN, signaling that President Donald Trump is poised to exert his constitutional power and intervene, in some instances, where he believes the Justice Department has overstepped. (FILE)</p>

The White House has assembled the paperwork to pardon dozens of people, two sources with knowledge of the developments tell CNN, signaling that President Donald Trump is poised to exert his constitutional power and intervene, in some instances, where he believes the Justice Department has overstepped.

The administration has prepared the pardoning paperwork for at least 30 people, the sources tell CNN. The President signed paperwork for one of those individuals on Wednesday: 63-year-old Alice Marie Johnson, whose life sentence was commuted by the President, according to two sources. Johnson was sentenced in 1996 on charges related to cocaine possession and money laundering.

Kim Kardashian West met with Trump and his son-in-law Jared Kushner in the Oval Office last week in an attempt to convince him to pardon her. Trump has not yet decided whether he will move forward with either a pardon or commutation for Johnson.

While Trump has expressed interest in recent days in doing so, his chief of staff, John Kelly, has advocated against it, according to two sources familiar with the matter.

One source familiar with the situation said Kushner has advocated for the Johnson pardon because it will help draw attention to the need for prison reform and what he views as unjust prison sentences.

The White House counsel's office is also currently reviewing potential clemency for a handful of individuals with cases similar to Johnson's who are neither celebrities nor political allies of the White House, the source said.

The Washington Post first reported that the White House had prepared the paperwork to pardon Johnson.

Last week, the President pardoned conservative author and filmmaker Dinesh D'Souza and told reporters he was considering pardoning Martha Stewart and commuting the sentence of former Illinois Gov. Rod Blagojevich. He raised eyebrows on Monday when he stated his belief that he had the "absolute right" to pardon himself, but said he wouldn't do so because he had "done nothing wrong."

In light of his recent pardoning spree, several of the President's outside friends and allies have begun advocating for people they believe should also be forgiven.

Though past presidents have typically waited until the end of their term to pardon controversial figures, Trump has pardoned five people during his 17 months in office. Most are unexpected or benefit political supporters. In addition to D'Souza, who pleaded guilty to violating federal campaign finance laws in 2014, he has granted forgiveness to former Arizona sheriff Joe Arpaio , Dick Cheney's former chief of staff I. Lewis "Scooter" Libby, former Navy sailor Kristian Saucier and the first black heavyweight boxing champion, Jack Johnson , thus far.

Who Trump pardons has oftentimes come as a jolt to his own staff, and on some occasions, the person being pardoned.

When ABC News reported in April that the President was poised to pardon Libby , it was not just a surprise to his friends and family, but him as well, according to a source familiar with the pardon. Bill Jeffress, his primary trial lawyer, said he learned about the pardon from media reports .

Trump has not followed the typical procedure for granting pardons, often choosing instead to bypass the Justice Department's Office of the Pardon Attorney while wielding his constitutional power.

The office recently informed 180 petitioners that they would not be granted clemency at this time, a White House official confirmed to CNN, but the administration has said it will continue to review pardons and make decisions on a rolling basis. There are currently 2,108 petitions for pardons, according to the Office of the Pardon Attorney.

The office had made clear in its guidelines that a pardon does not establish innocence.

"A presidential pardon is ordinarily a sign of forgiveness. A pardon is not a sign of vindication and does not connote or establish innocence. For that reason, when considering the merits of a pardon petition, pardon officials take into account the petitioner's acceptance of responsibility, remorse and atonement for the offense," according to the written instructions.

Critics have raised the question of whether Trump is sending a signal to his former allies and aides who are facing criminal charges in special counsel Robert Mueller's investigation with his robust use of his pardoning power.

But when he was asked in April whether he would consider a pardon for Michael Cohen, his longtime lawyer who is now  under federal investigation for possible bank fraud, wire fraud and campaign finance violations, Trump snapped a two-word response : "Stupid question."