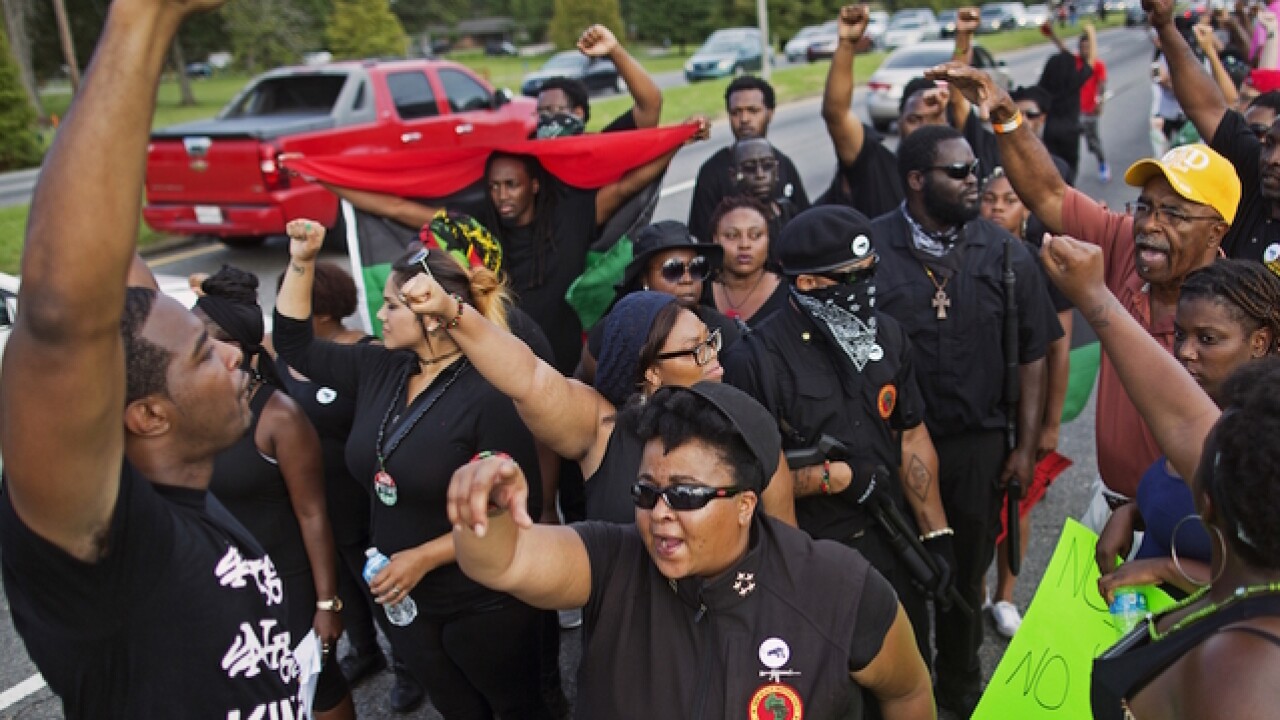 BATON ROUGE, La. (AP) — A prominent Black Lives Matter activist was one of several people arrested Saturday night during an often-tense protest in Louisiana that included a contingent of hundreds of people who took to the streets to call for justice and voice anger over the fatal shooting of a black man by two white police officers.

Demonstrators gathered at the convenience store where 37-year-old Alton Sterling was shot before fanning out to the Baton Rouge police department and the state Capitol for another day of demonstrations.

Meanwhile, in Minnesota police used smoke bombs to clear demonstrators who blocked Interstate 94 in St. Paul late Saturday night and gathered to voice their growing concern about Sterling's death and the fatal police shooting on Wednesday of Philando Castile in suburban St. Paul.

The gatherings in Baton Rouge came after overnight demonstrations produced tense moments resulting in 30 arrests. The demonstration Saturday outside the Baton Rouge Police Department was at times tense again, as protesters faced off against police dressed in riot gear.

The Department of Justice has opened an investigation into Sterling's death, which has angered many in the black community.

Shouting "No justice! No peace!" roughly 1,000 protesters gathered outside the police department, waving homemade signs as passing cars honked their support. Some drivers stopped by with bottles of water.

The protests lasted well into the evening but died down a little after midnight.

Police in riot gear came out numerous times as the demonstration wore on into the evening, facing off against the crowd that yelled slogans and waved signs. At one point early in the protest, a police officer on a microphone told the crowd that as long as they stayed on the grass and not on the road they could remain, and then police eventually pulled back and traffic reopened. But officers came out again after the demonstration moved to a different area of the street. At one point numerous police cars, with their blue lights flashing, sped off down the street where a smaller group of protesters had walked.

A police spokesman said two firearms were confiscated and several arrests made. Authorities said they pulled in officers from nearby parishes to buttress their numbers.

DeRay Mckesson was among those arrested Saturday night, according to an Associated Press reporter who was at the scene. It was not immediately clear what prompted Mckesson's arrest. Video posted on Periscope shows footage taken by McKesson in the moments leading up to his arrest. The video shows Mckesson walking alongside Airline Highway on his way back to the main area where the protests were going on when he was arrested.

On the video, Mckesson can be heard talking with fellow protesters and describing what he said was provocative police behavior against protesters.

"The police in Baton Rouge have been truly awful tonight," Mckesson said on the video. "They have provoked people, they chase people just for kicks. The police have been violent tonight. The protesters have not."

McKesson responds: "I'm under arrest, y'all!" before the camera is knocked to the ground.

Photo images captured by The Associated Press show police apprehending Mckesson, who at one point was on his knees before being pulled to his feet by police and led away with his hands secured behind his back.

Mckesson is one of the most recognizable faces to emerge from the Black Lives Matter movement. The former educator built a national following after he left his then-home and job in Minneapolis in August 2014 for Ferguson, Missouri, to document the rising anger over race relations after the police shooting of Michael Brown.

The local public radio station, WWNO, said on Twitter that one of their reporters was also arrested, and that they had little information on why.

Jade Flint was one of the protesters out on the street late Saturday.

"I feel if I'm not out here 'Who is?' This is stuff that I talk about daily with my friends and on Twitter. I can't say that I feel a certain way about a cause and not have my body out here representing for the community," said Flint. She said she would like to see the two officers involved in Sterling's death arrested.

Baton Rouge resident Marie Flowers came to the protest with her three children. She said people in the north Baton Rouge neighborhood where the shooting happened are frustrated.

Pointing to the crowds shouting along a fence surrounding the police department she said: "To me, this is just a snapshot of north Baton Rouge and how frustrated they are. They are so frustrated with this bull crap."

At one point, she gestured to her 12-year-old son and said they were there to protect men like him.

"Black boys are being killed and this is just the culmination of what has been going on for decades," Flowers said.

Lael Montgomery of Baton Rouge was at the convenience store where Sterling was shot.

"I've been in active in the community for years. We have been suffering police brutality for a long time. A lot of racism has been going on here for a long time," he said. "I have kids. They need to be raised in a better environment than they're in."

Members of the New Black Panther Party for Self Defense called for the arrest and indictment of the officers involved in Sterling's shooting, shouting "Black Power" and raising their fists.

"These are human rights violations," Krystal Muhammad shouted to the crowd at the convenience store before heading over to the police department. "They are not operating as human beings. They are being predators on our communities across America."

Montgomery said he didn't want protesters to go to the police station, saying he knows that police are on edge following the Thursday shooting deaths of five officers in Dallas.

Those safety concerns were also on the mind of Baton Rouge resident Eugene Collins, also at the convenience store. He said he was at the demonstrations Friday as well to help keep demonstrators away from police.

Baton Rouge police said in a written statement they are investigating a newspaper website's video that appears to show an officer with his weapon temporarily drawn at one point early Saturday morning as angry protesters confronted police.