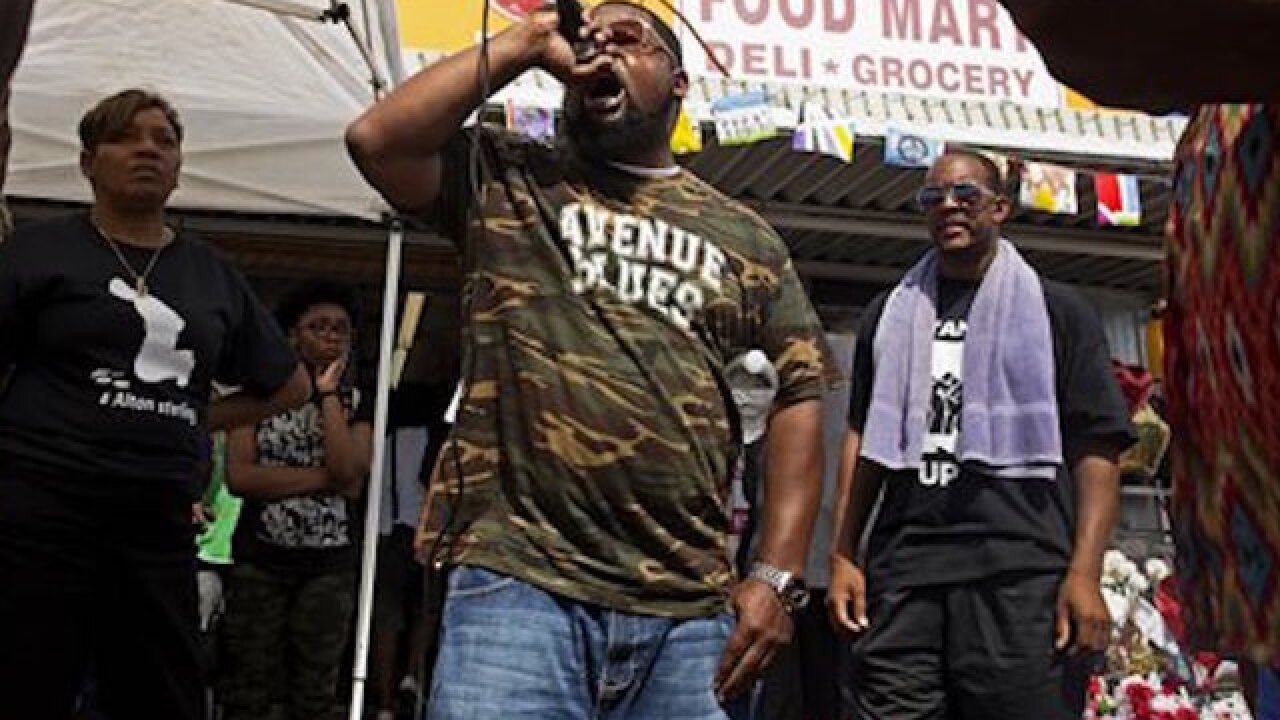 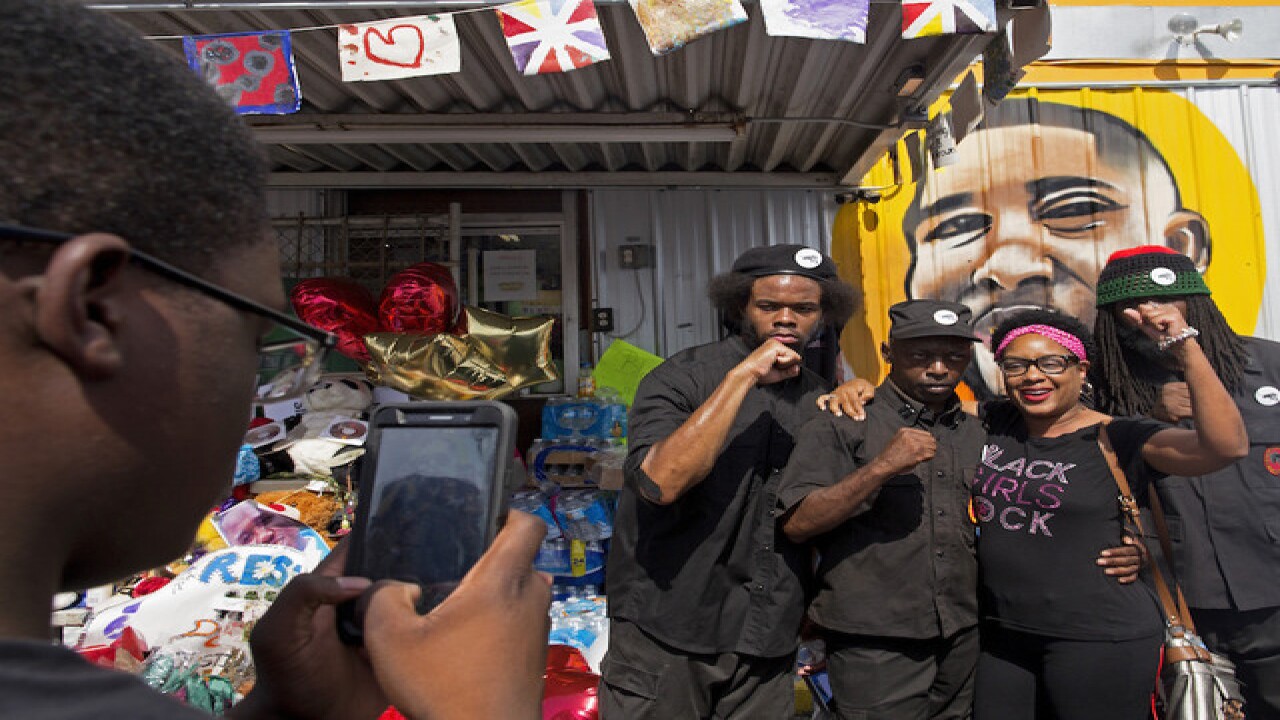 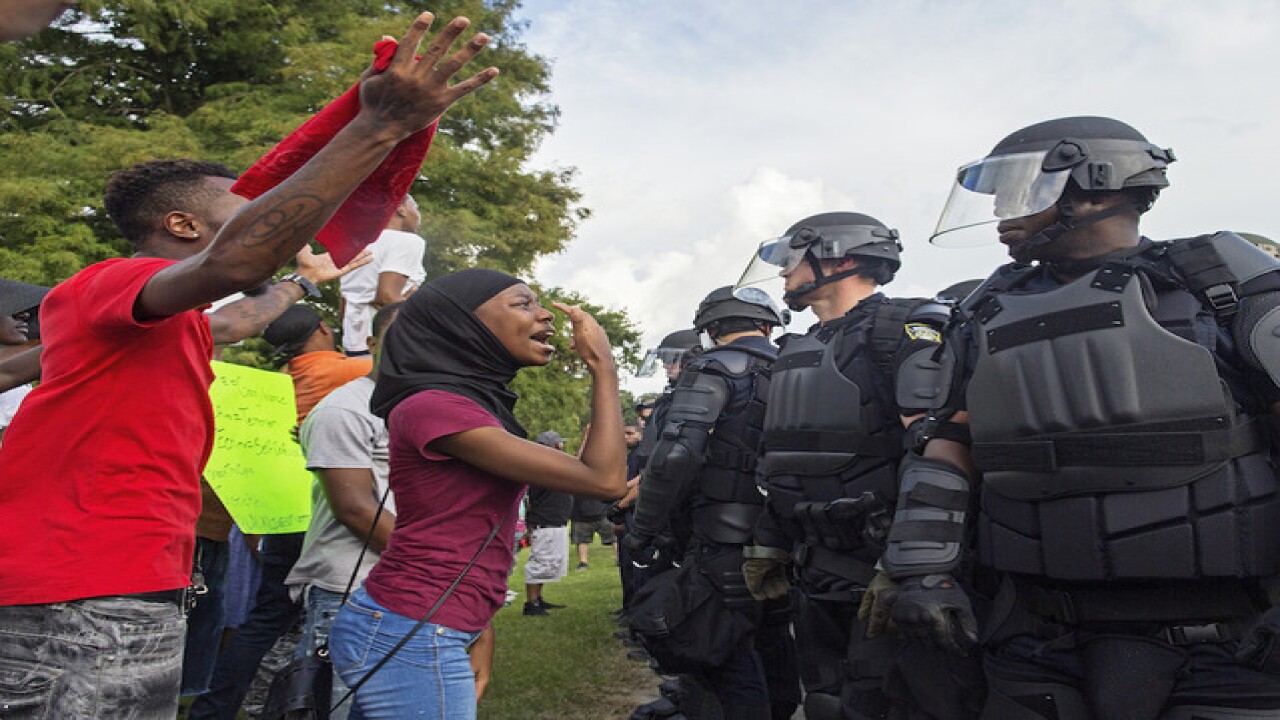 BATON ROUGE, La. (AP) — A prominent Black Lives Matter activist and 98 other people were taken into custody, authorities said Sunday, after protesters took to the streets to call for justice and voice anger over the fatal shooting of an African-American man by two white police officers.

Spokeswoman Casey Rayborn Hicks of the East Baton Rouge Sheriff's Office told The Associated Press that nearly 100 people were taken to the parish jail in connection with the protests that began Saturday. The vast majority of the people arrested were from Louisiana, and they included two reporters. A first wave of arrests took place on Friday and early Saturday, with 30 people taken into custody.

Tensions between black citizens and police have risen palpably over the past week or so amid police shootings of African-American men in Minnesota and Louisiana and the gunning down of five white police officers by a black suspect in Dallas in apparent retaliation.

Among those arrested was DeRay Mckesson, according to an Associated Press reporter who was at the scene. Mckesson is a leading figure in the Black Lives Matter movement that blossomed in the wake of the 2014 killing of Michael Brown in Ferguson, Missouri at the hands of police.

Authorities had just arrested a couple on a motorcycle driving by on the street when attention turned toward Mckesson. An officer could be heard pointing to a man with "loud shoes," and saying he would arrest him if he could reach him. Mckesson was wearing bright red shoes.

Booking documents provided by the East Baton Rouge Sheriff's Office say Mckesson was arrested on a charge of obstructing a highway. About 90 other people faced the same charge.

Video posted on Periscope shows footage taken by McKesson in the moments leading up to his arrest. The video shows Mckesson walking alongside Airline Highway on his way back to the main area where the protests were going on when he was arrested.

On the video, Mckesson can be heard talking with fellow protesters and describing what he said was provocative police behavior against protesters.

"The police in Baton Rouge have been truly awful tonight," Mckesson said on the video. "They have provoked people, they chase people just for kicks. The police have been violent tonight. The protesters have not."

McKesson responds: "I'm under arrest, y'all!" before the camera is knocked to the ground.

Photo images captured by The Associated Press show police apprehending Mckesson, who at one point was on his knees before being pulled to his feet by police and led away with his hands secured behind his back.

Darren Bowers, 26, of Baton Rouge, arrived at the jail around 9 a.m. Sunday to see if he could get his girlfriend, 26-year-old Ariel Bates, released. Bowers wasn't present when Bates was arrested near police headquarters. Bowers said she called him from the jail early Sunday.

"She told me that they jumped all on her and her cousin on the grass. They weren't on the street or anything," Bowers said.

He said he believes police are "antagonizing" protesters.

"People are peacefully protesting. Why are (police) in riot gear?" he said.

The tumult over police killings reached well beyond Louisiana. In Minnesota, police arrested about 100 people in the capital of St. Paul during protests. Authorities said 21 St. Paul officers and six state troopers were hurt late Saturday and early Sunday. On Wednesday night, police shot and killed Philando Castile, a 32-year-old black man during a traffic stop in suburban St. Paul.

The starting point of Saturday's demonstration was the convenience store where 37-year-old Alton Sterling was shot and killed last week. Protesters then fanned out to the Baton Rouge police department and the state Capitol.

The Department of Justice has opened an investigation into Sterling's death, which has angered many in the black community.

Shouting "No justice! No peace!" roughly 1,000 protesters gathered outside the police department, waving homemade signs as passing cars honked their support. Some drivers stopped by with bottles of water.

The protests lasted well into the evening but died down a little after midnight.

Police in riot gear came out numerous times as the demonstration wore on into the evening, facing off against the crowd that yelled slogans and waved signs.

At one point early in the protest, a police officer on a microphone told the crowd that as long as they stayed on the grass and not on the road they could remain, and then police eventually pulled back and traffic reopened.

But officers came out again after the demonstration moved to a different area of the street. At one point numerous police cars, with their blue lights flashing, sped off down the street where a smaller group of protesters had walked.

A police spokesman said two firearms were confiscated and several arrests made. Authorities said they pulled in officers from nearby parishes to buttress their numbers.

WAFB-TV reporter Chris Slaughter was among those arrested, Hicks confirmed.

The local public radio station, WWNO, said on Twitter that one of their reporters was also arrested, and that they had little information on why.

Members of the New Black Panther Party for Self Defense called for the arrest and indictment of the officers involved in Sterling's shooting, shouting "Black Power" and raising their fists.

"These are human rights violations," Krystal Muhammad shouted to the crowd at the convenience store before heading over to the police department. "They are not operating as human beings. They are being predators on our communities across America."