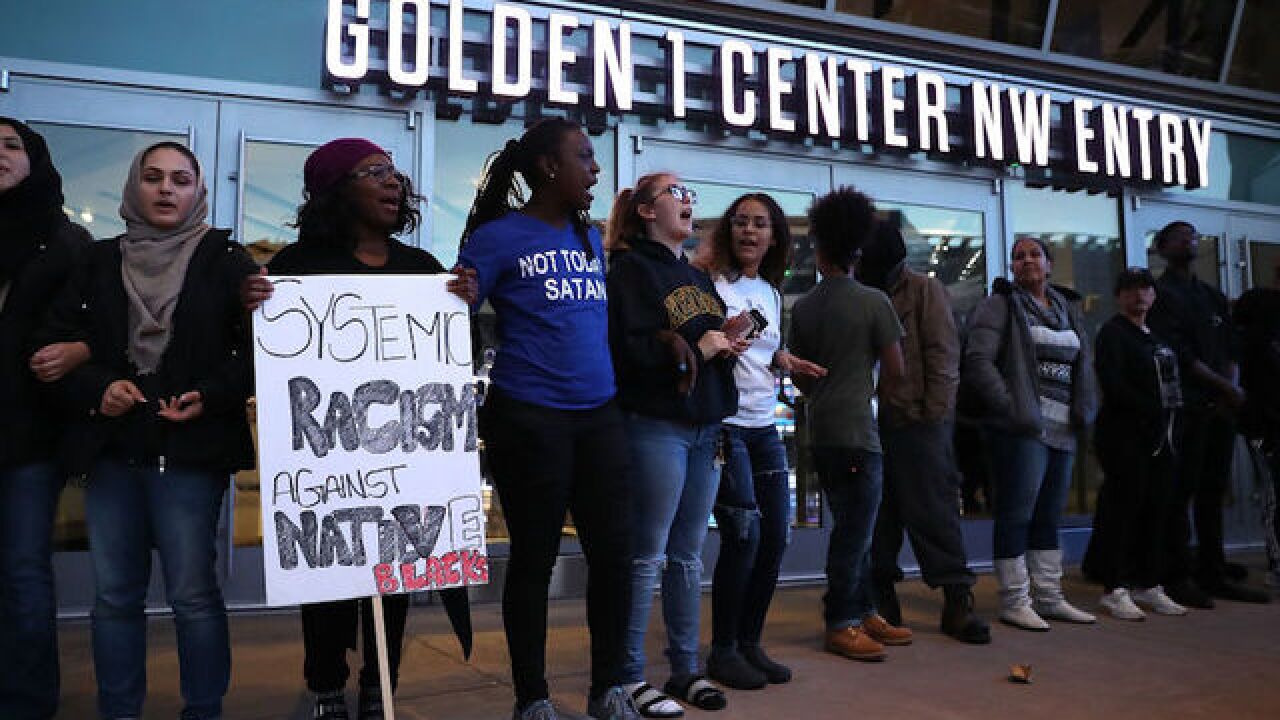 Copyright Getty Images
Justin Sullivan
<p>SACRAMENTO, CA - MARCH 22: Black Live Matter protesters chant as they block the entrance to the Golden 1 Center during a demonstration on March 22, 2018 in Sacramento, California. Hundreds of protesters staged a demonstration against the Sacramento police department after two officers shot and killed Stephon Clark, an unarmed black man, in the backyard of his grandmother's house following a foot pursuit on Sunday evening. (Photo by Justin Sullivan/Getty Images)</p>

Protests in response to the death of Stephon Clark, a 22-year-old who was shot and killed by Sacramento Police on Sunday after officers confused his cellphone for a gun, caused major disruptions in Sacramento on Thursday.

Most fans were unable to enter the Sacramento Kings' NBA match against the Atlanta Hawks despite a delay in the game. Protesters locked arms around the arena's gates, prohibiting fans from reaching the doors.

As the game tipped off Thursday evening, only the first few rows of seats were full in the arena that seats nearly 20,000 fans.

"Tonight's game began with a delay," the Kings said in a statement. "Due to law enforcement being unable to ensure ticketed fans could safely enter the arena, the arena remains closed and we ask fans outside to travel home. We will issue further information soon regarding a refund."

Some fans left the area outside the arena disappointed.

"I"m very disappointed," Fermin Rodriguez told the Sacramento Bee, as he was planning on seeing the game with his wife and four children. "I mean I feel their pain, but why do we have to suffer as well? We paid a lot of money for these tickets. I hope they give us a refund."

Protesters also disrupted rush hour traffic earlier in the evening by standing in the middle of Interstate 5 before police cleared the hundreds of protesters off the freeway.

Captain Norm Leong of the Sacramento Police Department confirmed on Twitter late Thursday that no one has been arrested in connection to Thursday's demonstration.

The protests were sparked hours after Sacramento Police released helicopter and bodycam video of Sunday's incident. It showed Clark running through several yards before being confronted behind his grandmother's door.

In the video, police could be heard telling him to put his hands up. Within seconds, officers fired 20 rounds at Clark, killing him.

Police were originally called to the scene over someone breaking into cars.