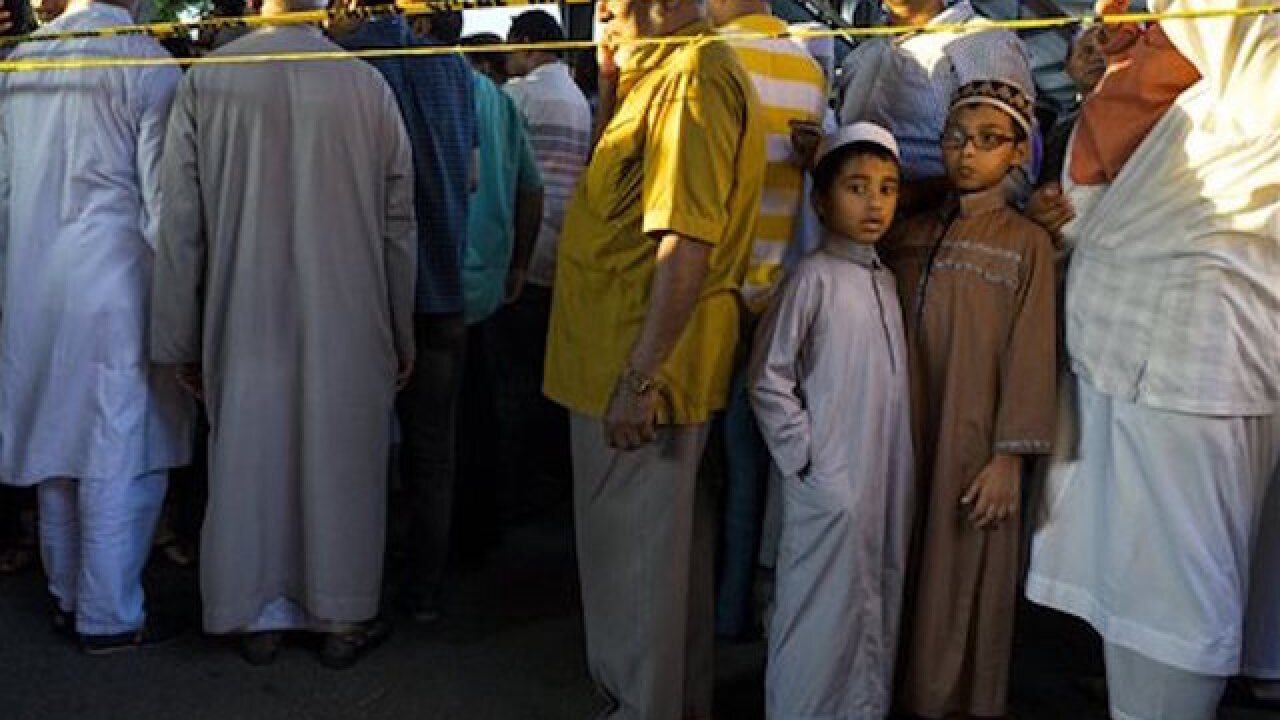 Copyright Associated Press
Craig Ruttle
<p>People gather for a demonstration Saturday, Aug. 13, 2016, in the Queens borough of New York, near a crime scene after the leader of a New York City mosque and an associate were fatally shot as they left afternoon prayers. Police said 55-year-old Imam Maulama Akonjee and his 64-year-old associate, Tharam Uddin, were shot as they left the Al-Furqan Jame Masjid mosque. (AP Photo/Craig Ruttle)</p>

NEW YORK (AP) — Police detectives investigating the slayings of an imam and his associate have detained and questioned a man as part of an attempt to identify a vehicle seen leaving the scene of the shooting, authorities said Monday.

The man was taken into custody in connection with "an unrelated incident" but had been questioned by detectives regarding the Saturday afternoon shooting of Imam Maulama Alauddin Akonjee and Thara Uddin, said Stephen Davis, the New York Police Department's top spokesman.

Akonjee, 55, and Uddin, 64, were shot shortly after leaving the Al-Furqan Jame Masjid mosque in the Ozone Park neighborhood of Queens.

Authorities say surveillance footage showed a car leaving the scene. Detectives checked a police database and found that a car with a matching description had been involved in a hit-and-run crash in Brooklyn, police said.

In that case, a witness to the accident recorded the car's license plate. Investigators from a warrants squad tracked it to an address in Brooklyn where they waited in an unmarked police cruiser for the man to enter before blocking him in, police said.

The man intentionally bumped their vehicle with his car before he was placed in handcuffs, they said.

The case has not been classified as a hate crime, and police haven't said what prompted the brazen daytime shooting. The gunman is a dark-haired, bearded man wearing glasses, according to a police sketch artist's depiction.

Islamic funeral prayers were scheduled to be held Monday a few blocks from where the victims were killed.

The shooting has shocked the largely Bangladeshi Muslim community in Queens and Brooklyn, sparking fear among some that they could be targeted because of their faith. Some residents have described harassment in recent months by people who shouted anti-Muslim epithets.