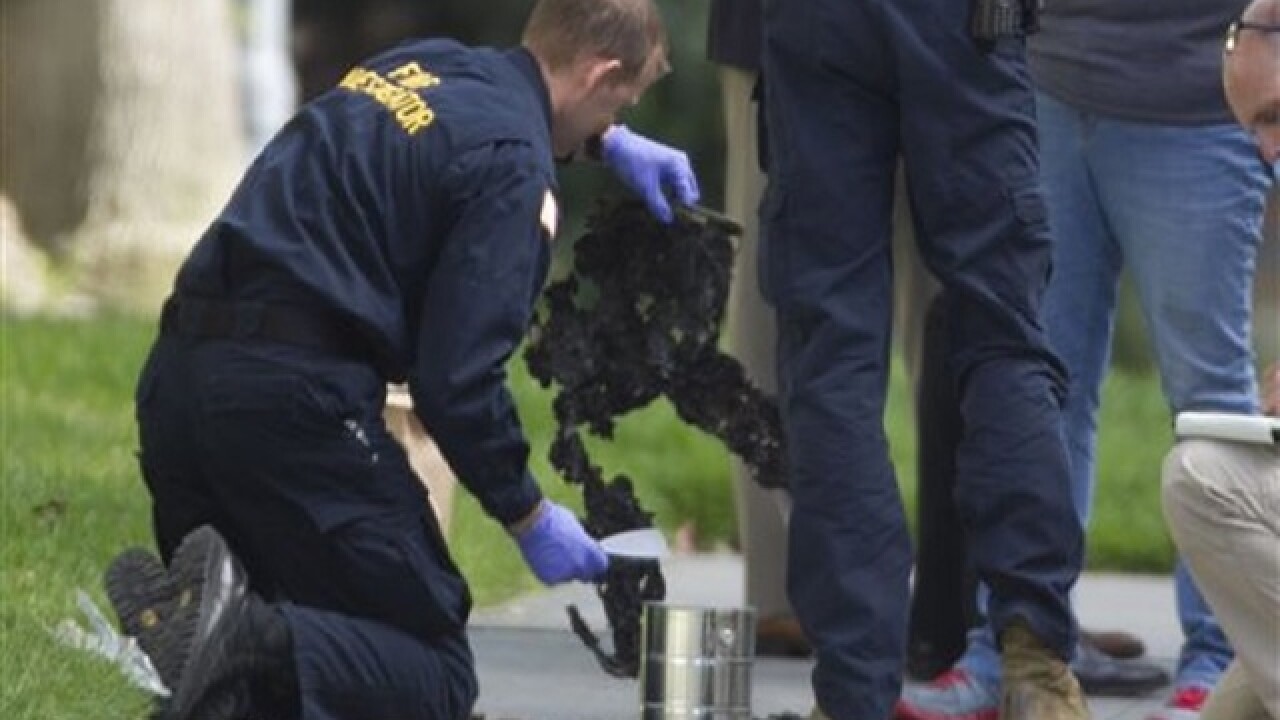 John Gibbins
<p>San Diego's Metro Arson Strike Team and SDPD homicide team gather evidence from the sidewalk and grassy area where a homeless person was attacked in downtown San Diego early Wednesday morning, July 6, 2016. It is the fourth attack on homeless men in San Diego in four days, two of which resulted in death. (John Gibbins/San Diego Union-Tribune via AP)</p>

SAN DIEGO (AP) — Another San Diego homeless man was seriously injured and set on fire Wednesday by an attacker police say struck while the man was asleep, the latest in a spate of attacks on transients that have left two dead.
Police said the 23-year-old victim was not expected to survive upper-body injuries. They also said they believe the same man is behind all the attacks.
A news release said the latest victim was set on fire, though Capt. David Nisleit said earlier that a witness pulled away a burning cloth that the attacker had placed on the victim before fleeing.
It was the fourth attack in four days on homeless men in San Diego. The attacks that began over the Fourth of July weekend have set the city's homeless population on edge.
As in previous attacks, Wednesday's victim, whose identity was being withheld pending notification of next of kin, was sleeping in the early morning hours when the assailant approached. The attack occurred downtown but the other three were in different parts of the city.
Nisleit declined to speak in detail about why police believe all four attacks are connected but mentioned the manner in which they were carried out and witness interviews. Police had no information connecting the victims.
"It's really hard to say what our suspect's motive is. All I can say is these are senseless attacks," Nisleit said at a news conference.
On Tuesday, police released convenience store surveillance video of someone who they now identify as the sole suspect — a man wearing a cap, jacket and backpack.
Angelo De Nardo, 53, suffered extensive trauma to his upper torso and died before his body was set on fire. His badly burned remains were found Sunday morning between Interstate 5 and some train tracks. He had family in Pennsylvania.
Police have not explained the nature of the upper torso injuries or what kind of weapon was used.
On Monday, police responded to a 911 call of a 61-year-old man who suffered life-threatening injuries to his upper torso and remained in critical condition Wednesday. A few hours later, police discovered the second body, that of a 41-year-old man who bled from the upper torso.
"There's no doubt our city has been shaken by these gruesome attacks," Mayor Kevin Faulconer said at the news conference. "The last few days have been particularly harrowing and emotional for those who struggle with homelessness. These crimes are being committed against some of our city's most vulnerable people. These crimes are reprehensible."
The Alpha Project, which provides temporary housing in San Diego, has dispatched eight people to canyons, freeway ramps and other encampments to encourage transients to sleep in groups and in lighted areas, said Bob McElroy, the group's president. McElroy has been distributing pepper spray.
"People are freaking out," said McElroy. "This guy is systematically targeting people who are by themselves, kills them and sets them on fire."
In 2012, a man was charged in a rampage in nearby Orange County that left six people dead, including four homeless men and a woman and her son. Itzcoatl Ocampo, 25, died in jail before trial. Several of his victims were stabbed.
Copyright 2016 The Associated Press. All rights reserved. This material may not be published, broadcast, rewritten or redistributed.