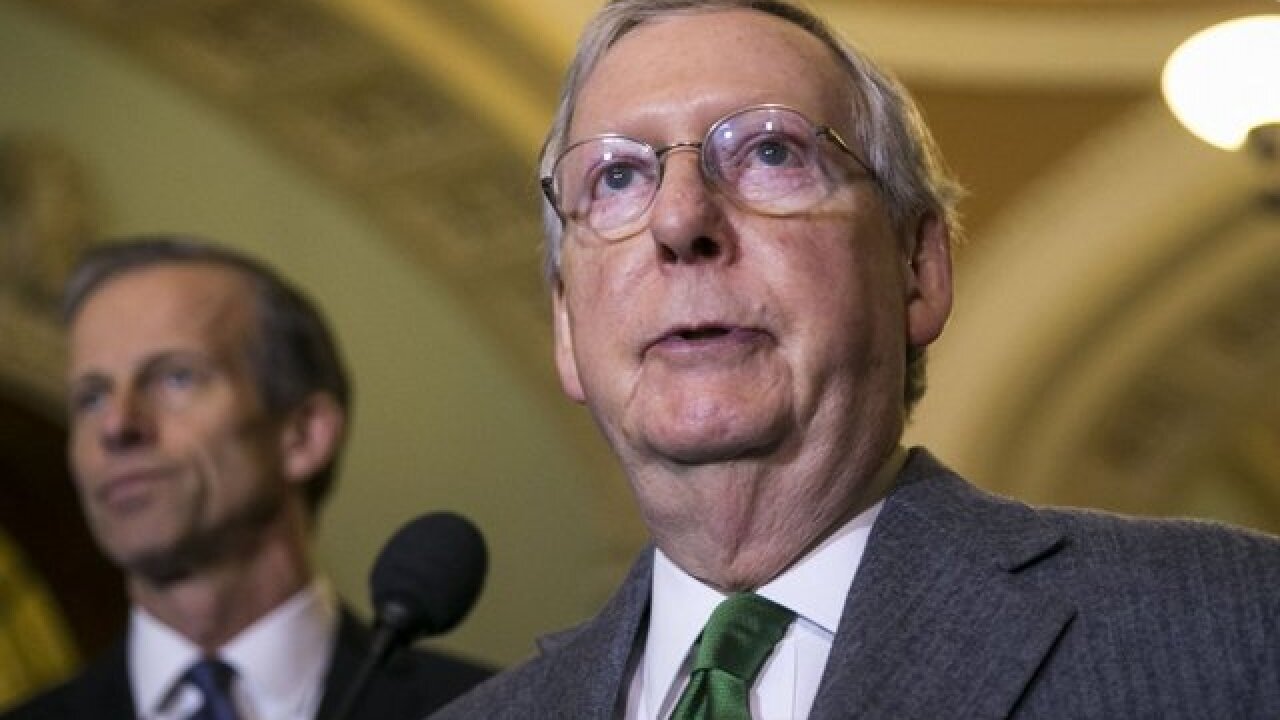 Senate Majority Leader Mitch McConnell announced Tuesday the Senate will skip much of its treasured August recess to press ahead confirming the President's nominees and passing government spending bills.

The move follows months of frustration by GOP leaders -- and President Donald Trump -- over the countless Democratic filibusters that have dramatically slowed progress in the Senate.

"Due to the historic obstruction by Senate Democrats of the President's nominees, and the goal of passing appropriations bills prior to the end of the fiscal year, the August recess has been canceled," McConnell said in a statement. "Senators should expect to remain in session in August to pass legislation, including appropriations bills, and to make additional progress on the President's nominees."

With the move, McConnell is pushing off a potentially costly conflict with Trump who wants the Senate to stay and work and isn't afraid to say it.

"It's totally out of fear of what Trump will do," said one Republican senator, speaking anonymously who warned a spat with Trump could hurt Republicans in the midterm elections.

"The only reason this is being considered, the only reason, is that leadership is fearful that Trump will blast the Senate if they're not in session and therefore hurt Republican chances," the senator said.

But many Republicans senators hailed the decision, saying they were willing to give up some of their downtime to catch up on the Senate's work.

"We have 278 nominees backed up now waiting for confirmation and we've got to get the government funded," said Sen. David Perdue, a Georgia Republican and a leader of the effort to persuade McConnell to stay into August.

Perdue said he would like to avoid the "last-minute drama of a September 30 deadline" when lawmakers would have to choose between a government shutdown or voting for a giant and unwieldy omnibus spending bill.

McConnell's decision upset Democrats, many of whom are up for re-election and would rather be home campaigning.

"The fact that the Republicans have resorted to keeping Democrats off the campaign trail in August shows you just how nervous they are about November," a senior Senate Democratic aide told CNN.

Some Republicans also were not thrilled about being forced to stay into August, for the second year in a row.

"I don't know why they're talking about that," said Sen. Jim Risch, an Idaho Republican. "Because this Congress has been one of the most productive Congresses in many, many, many years and for those of us who are conservative, in my lifetime."

My statement on cancelling the August recess: pic.twitter.com/yyAEUSMVQW

The dramatic move by McConnell comes a week before he hits a key Senate milestone, surpassing former Sen. Robert Dole of Kansas to become the longest serving Republican leader in the chamber's history. It reflects his careful navigation of the political forces around him that have allowed him to have many significant legislative wins over the years and to keep the job for so long.

Low-key and soft-spoken, McConnell is nevertheless determined and willing to take tough steps to achieve his political and legislative goals. He did that when he boldly blocked Merrick Garland, President Barack Obama's choice for the Supreme Court, and worked to install Trump's pick Neil Gorsuch instead.

He's also patient and willing to doing the plodding groundwork needed for legislative victories, like the ones he's trying to set up this summer that he believes will give voters reasons to keep Republicans in control of the Senate. They include clearing a backlog of nominations and passing several lower-profile bills that McConnell says are evidence of good governing.

That pleases members of his conference, who elected him leader, and must do so again next year.

"I think it reflects his way to read the tea leaves. He has a good political sense," said Sen. Johnny Isakson, a Georgia Republican, said prior to McConnell's official decision to stay in August. "I think anybody who looks at it realizes you have a readymade issue that somebody can make hay out of that would take up a lot of time."

McConnell certainly has his critics. Wisconsin Republican Sen. Ron Johnson has been one of the few members of the GOP conference to publicly challenge McConnell.

"I've primarily been a critic of this place," Johnson told CNN. "I don't envy the (House speaker) or any leader around here. You are literally trying to herd cats."

But Johnson said there is a "real level of disgust" with some conservatives across the country because the GOP-led Senate hasn't carried out its promises.

"In general, what I hear from the conservative base in Wisconsin is, why aren't you guys supporting Trump? Where's the funding for the wall? But specifically, why didn't you fix Obamacare," Johnson said. "The problem we had -- and this wasn't the leader's fault -- we had Republican senators who didn't honor their promise to repeal it."