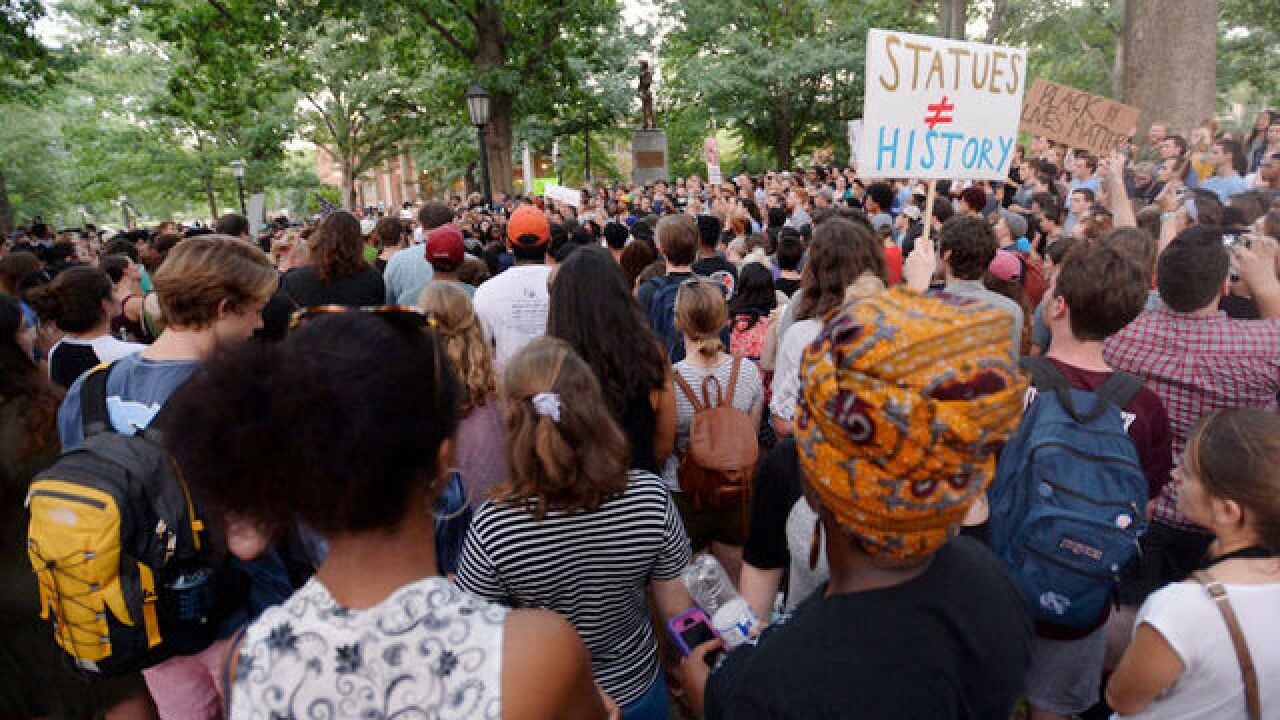 Image copyright 2018 Getty Images. All rights reserved. This material may not be published, broadcast, rewritten, or redistributed.
Sara D. Davis
<p>Demonstrators rally for the removal of a Confederate statue, coined Silent Sam, on the campus of the University of Chapel Hill on August 22, 2017 in Chapel Hill North Carolina. The city mayor had asked the university to take the channels to remove the statue. </p>

A crowd of about 250 protesters on the University of North Carolina at Chapel Hill's campus knocked over the controversial Silent Sam Confederate statue, according to the university.

A video and pictures from a student shows the statue coming down on Monday as students chant "I believe that we will win."

Video footage from WRAL-TV shows protesters putting up poles and banners around the statue during daylight. By nightfall, video from WRAL shows the statue falling down and students cheering. Protesters could also be seen kicking Silent Sam's head and putting dirt on the statue.

"Tonight's actions were dangerous, and we are very fortunate that no one was injured. We are investigating the vandalism and assessing the full extent of the damage," UNC said in a statement to CNN.

The statue came down around 9:20 p.m. ET on eve of the first day of classes, the university said.

"The charges are for concealing one's face during a public rally and resisting arrest," Luck said.

"The Governor understands that many people are frustrated by the pace of change and he shares their frustration, but violent destruction of public property has no place in our communities," the statement read.

Silent Sam was erected in 1913 to remember the "sons of the University who died for their beloved Southland 1861-1865," according to UNC's website. The United Daughters of the Confederacy gave the statue to the university in 1909.

Students and faculty both call for Silent Sam's removal

The toppling Silent Sam came months after students and some faculty called for removal of the statue. The UNC Board of Trustees held a listening session in November where attendees spoke in support of and against Silent Sam, according to CNN affiliate WTVD-TV.

Maya Little, a second-year PhD student in UNC's History Department, told WTVD-TV in November that the school was spending too much money "to maintain a statue that glorifies the enslavement of my ancestors. That was dedicated by a man who took pleasure in beating a black woman on our campus, that was erected by a group who praised the KKK as protectors of white womanhood. "

Five months later in April, Little told WTVD she literally put her blood and red ink on the statue. Little is facing expulsion and criminal charges for the incident, WTVD reports.

UNC's history department also released an undated statement on Silent Sam. The department said on its website it had the support "of more than three quarters of the faculty."

"The faculty of the Department of History urges the officers of UNC and other state officials to pursue every avenue to remove the 'Silent Sam' monument," the statement read. "From its inception, the monument was exclusionary and offered a highly selective interpretation of the nation's history ... The monument will continue to promote malicious values that have persisted too long on this campus, in this state, and in this nation."

Supporters of Silent Sam, see the statue differently, though. Dorothy Holloway told WTVD in May that she saw Silent Sam as "guarding the college."

Gov. Cooper issued a statement last year calling for the removal of more Confederate monuments. He said the state Legislature should repeal a 2015 law that prevents the removal or relocation of monuments so local governments and the state will have the authority to decide.

A state agency has been asked to determine the costs of removing Confederate monuments from state property and find alternative spots for their placement, Cooper said.

Cooper said he will also urge the legislature to defeat a bill that grants immunity from liability to motorists who strike protesters.

Other Confederate monuments coming down

Silent Sam was not the first Confederate monument to come down in North Carolina. Last August, authorities said seven people were arrested in connection with the toppling of the Confederate Soldiers Monument during a protest in Durham, North Carolina. The monument came down two days after the Unite the Right Rally in Charlottesville, Virginia, that left Heather Heyer dead.

In Tennessee, crews in December moved two Confederate statues from parks in Memphis after city officials sold the land to a nonprofit.