Stonefish are already scary, and now scientists have found they have switchblades in their heads 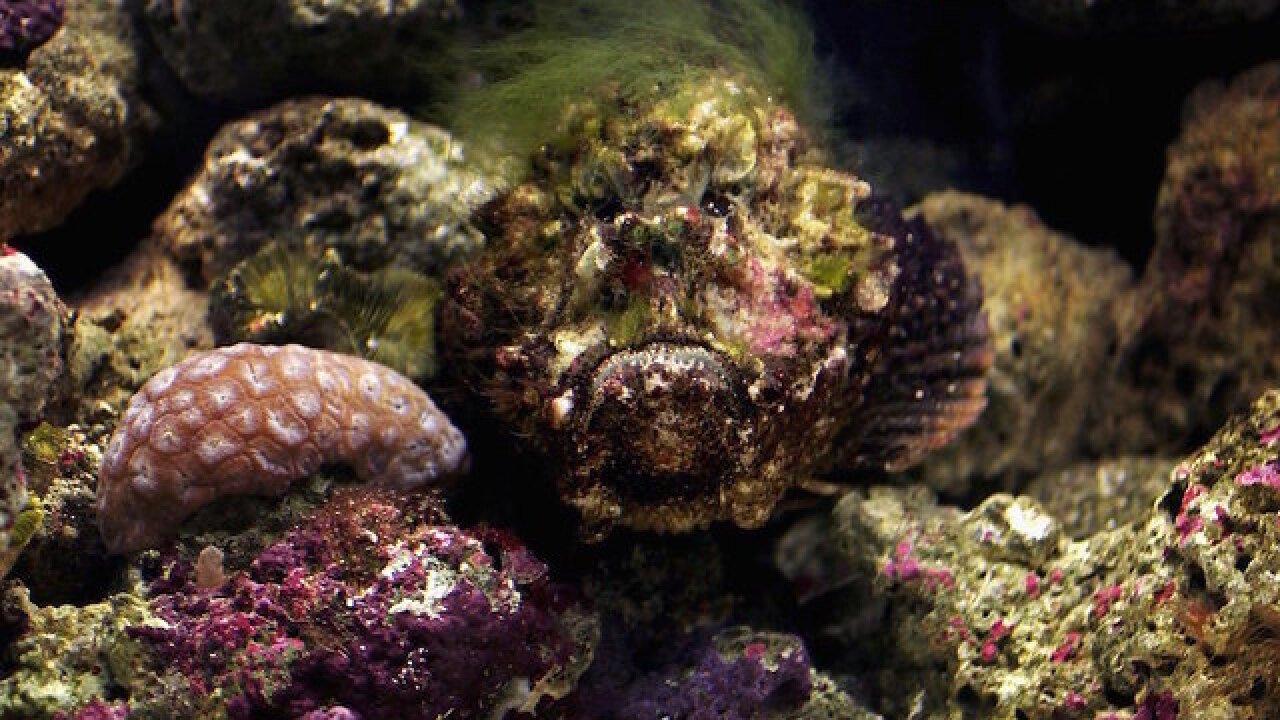 Copyright Getty Images
Ian Waldie
<p>SYDNEY, NSW - JANUARY 24: A Stonefish (centre) is pictured at Oceanworld Aquarium January 24, 2006 in Sydney, Australia. The Stonefish is well camouflaged in the ocean, as it is a brownish colour, and often resembles a rock. It has thirteen sharp dorsal spines on its back, which each have extremely toxic venom, which can cause extreme local pain and tissue damage, respiratory distress, which can lead to cardiovascular shock that can be fatal if no medical treatment is sought.  (Photo by Ian Waldie/Getty Images)</p>

If you're interested in fish who are scary-looking, poisonous and chock-full of elaborate defense mechanisms, look no further than the stonefish, a genus of fish that populate coastal waters of the Indo-Pacific region.

As if their deadly venom and spiny exteriors weren't enough, scientists at the University of Kansas have found that stonefish also have a hidden switchblade on their face that they can flick out whenever they feel like they're in danger.

Scientists call the bony, blade-like protrusion a "lachrymal saber," because it is located on a bone under the fish's eyes. Also, "lachrymal saber" is just a really metal-sounding name.

William Leo Smith, associate curator and associate professor of ecology & evolutionary biology at KU, first started to understand how the lachrymal saber worked 15 years ago, when he was dissecting a stonefish he kept as a pet.

This is a game-changer

He tells CNN the mechanism isn't just a cool new discovery (although it's that, too). It also changes the scientific understandings and classifications of this particular type of fish.

"It opens up these ideas of ecological questions. Muscular systems, bone systems, nervous systems all came together to form this. What led to its evolution or use?

In other words, he says, "Why do we see this accumulation of so many horrible things on one fish?"

The lachrymal saber is housed inside the fish's head, and they use their cheek muscles to deploy it. Though some stonefish are venomous, the saber is not.

It could be a sex thing, too

Smith says he and his fellow researchers have reason to believe the saber isn't just for warding off predators: It could be a sex thing, too.

"There is evidence pushing towards that," he says. "They may use this in battles with other members of their species, like ram horns. It may also be involved in courtship behaviors."

Oh, and the sabers glow.

"It's fluorescent green," Smith says. Since stonefish rely on camouflage for both protection and hunting prey, Smith doesn't think the fluorescence has a defensive purpose like, say, warning off predators.

There are 134 described species of stonefish, and by Smith's observation, all of them have some form of lachrymal saber.