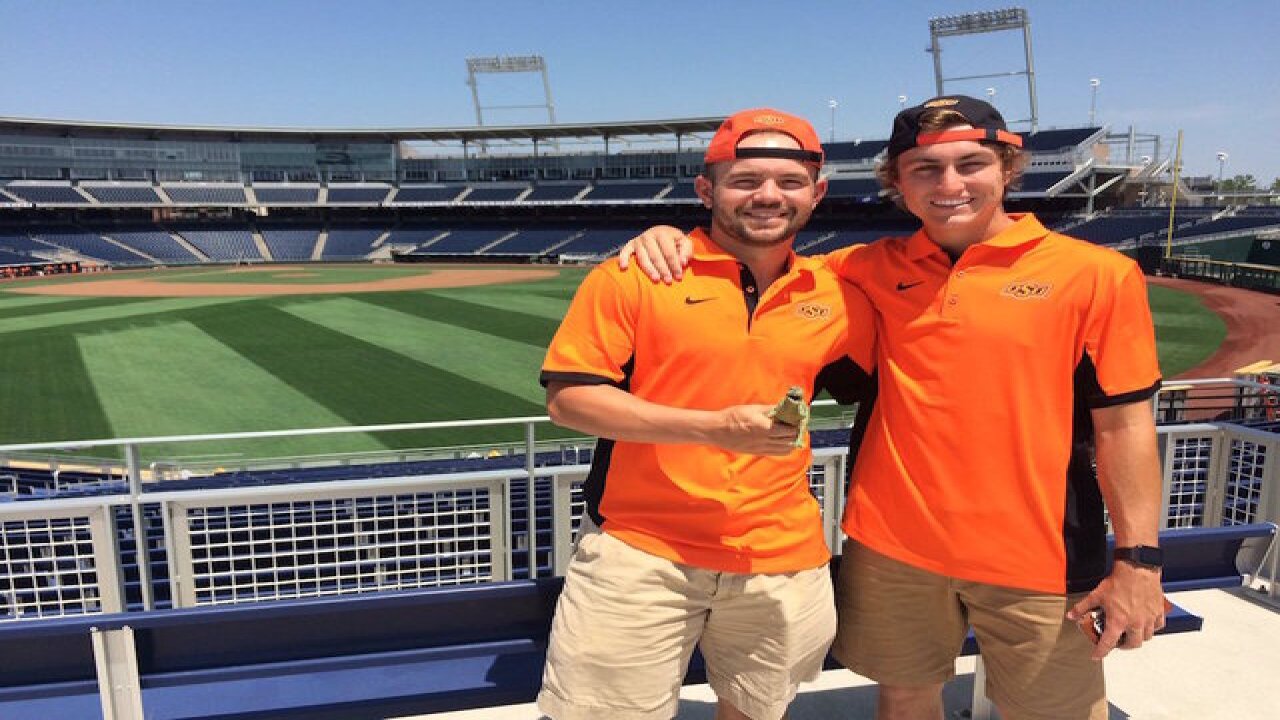 The most popular member of the Oklahoma State University baseball team might not be a player.

Or a staff member.

In fact, “Utropolis” as he is called is a small, plastic dinosaur found by several of the Cowboys’ players on the way back to the team hotel at the Big 12 Tournament.

But Oklahoma State has won all five Regional and Super Regional games this postseason and the players are starting to believe in their little green friend. The Big 12 team is seeking its first NCAA title since 1959.

“He was seriously just sitting on the sidewalk staring at us,” Cowboys sophomore infielder Jacob Chappell said. “So we just brought him in as family. He’s just been bringing in good vibes, good juju and just keeping the team loose ever since then.”

Of course, some of the Cowboys might believe more than others, but the mere mention of Utropolis brings chuckles to many of the Oklahoma State players. Utropolis even has his own Twitter account — @utrop4pokes.

“It definitely just relaxes everyone on the team because in the dugout we have a lot of fun with him,” Freshman catcher Colin Simpson said. “Kind of everybody’s in on him. A couple guys on the team take him during certain innings because it’s good ‘juju’ you could say. I’ve never been a part of something where the dugout mascot grows so rapidly."

Best believe I got gear too! Thanks @Nike for making me look even better. How that's even possible, I'm not sure. pic.twitter.com/XIvSIJp4of

The tiny prehistoric lizard has feeding rituals, its own routines and often even disappears for a predetermined inning — if junior pitcher Tyler Buffett is on the mound.

Even Oklahoma State senior infielder David Petrino has come around after a near-fatal eighth inning at the Big 12 Tournament.

“Utrop was hurled against the wall in the eighth inning by me,” Petrino said. “Buffett was in the game. We proceeded to hit three ground balls back to the pitcher and Buff had a rough inning.

“We took (Utropolis) to our trainer. He got taped up. I wasn’t allowed to be around Utrop for a while. But once we made up in regionals. Corey Hassel hit a grand slam when we had some juju working in the dugout. Ever since then, we’ve been doing really well. We haven’t lost.”

Now Petrino has started to think about what will happen to Utropolis after the infielder graduates.

“I’m going to have to pass him down to Jake,” Petrino said. “Jake can’t take care of him himself, I don’t think, so he’ll have to hire someone on. (Junior) Nick Gallo’s probably first in line to get that role. The offseason’s important. He’ll probably be hibernating. Most dinosaurs don’t, but he is until next year. Probably hand him down to Jake.”

Should the Cowboys win their first title in more than 50 years, Chappell has big plans for his latest friend.

“If he wins us a (title), we might have to put him in a glass case or frame him or make a statue of him at the stadium or something,” Chappell said.