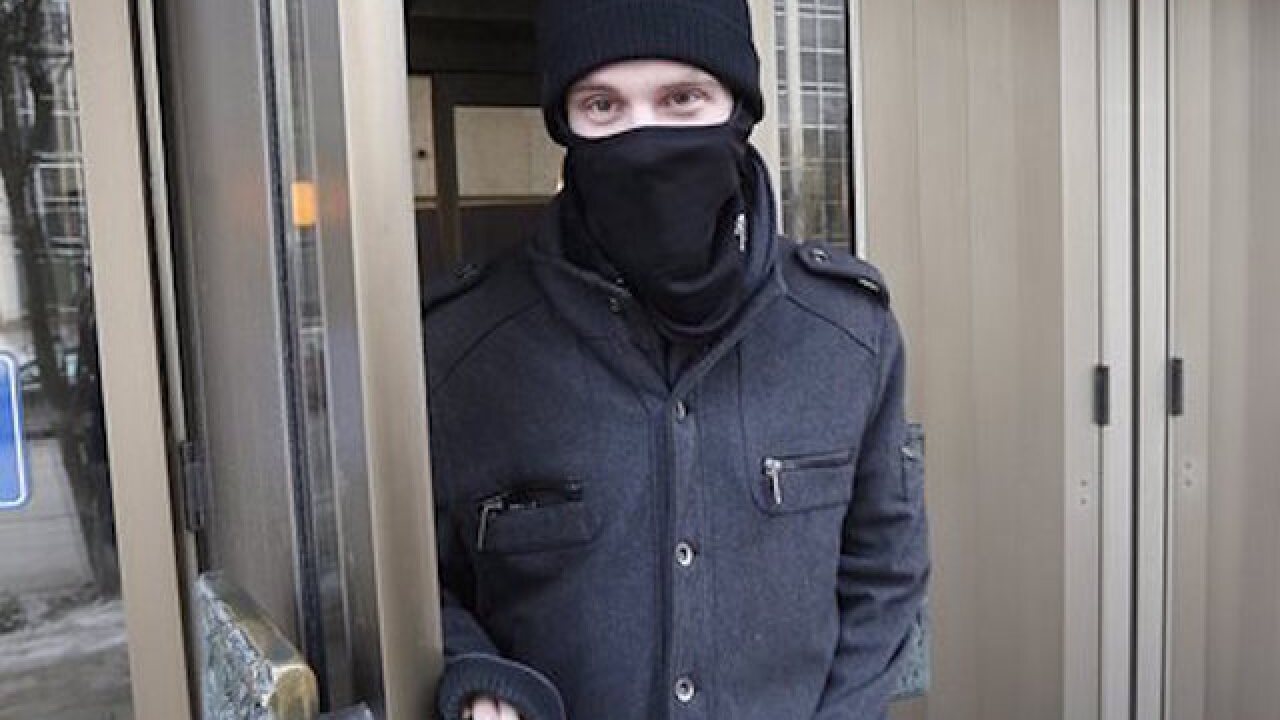 John Woods
<p>In this Feb. 2, 2016, photo, Aaron Driver leaves the Law Courts in Winnipeg, Manitoba. A senior police official said late Wednesday, Aug. 10, a suspect allegedly planned to use a bomb to carry out a suicide bombing mission in a public area but was killed in a police operation. The official, who spoke on condition of anonymity because he was not authorized to speak about details ahead of a Thursday news conference, identified the suspect as Aaron Driver. (John Woods/The Canadian Press via AP)</p>

TORONTO (AP) — A Canadian man previously banned from associating with Islamic State extremists prepared a martyrdom video and was about to commit a terrorist attack but was killed after he detonated his explosive device in a taxi and was shot at by officers who say they thwarted the suicide bomb plot after being tipped off by the FBI, police said Thursday.

The suspect planned to carry out a suicide bombing in a public area in an urban center during rush hour, Deputy Royal Canadian Police Commander Mike Cabana said. He identified the suspect as Aaron Driver, 24, originally from Winnipeg, Manitoba.

Royal Canadian Mounted Police Commander Jennifer Strachan said Driver was intercepted by police as he entered a taxi with a backpack and said Driver detonated an explosive device, injuring himself and the taxi driver, before police shot at him. It was unclear whether Driver died as a result of the shrapnel or a police bullet.

After being tipped off by the FBI, police said Driver was quickly identified as the person in the so- called martyrdom video. Police say he planned an attack within 72 hours.

"It was a race against time," Cabana said.

In the video, aired during a news conference in Ottawa, a masked Driver is seen railing against western "enemies of Islam" and warning that the only solution would be the "spilling of your blood."

Driver had been under the spotlight for at least a year, as authorities believed he was a threat because he could help terror groups. He gave a media interview where he expressed support for prior terror attacks in Canada and expressed interest in travelling to join the Islamic State.

"This case is an example of the strong cross-border law enforcement cooperation that exists between Canada and the United States.  Our partnership reflects our joint commitment to protecting the safety of our citizens," U.S. Ambassador to Canada Bruce Heyman said in a statement.

Transit agencies in Toronto, Canada's largest city, were warned of a security threat before police confronted the suspect. Brad Ross, spokesman for the Toronto Transit Commission, said the agency was made aware of a terror threat investigation early the previous day, but noted that it had no specifics attached.

He said that as a precaution a "vigilance notice" was issued to all staff, encouraging them to speak up if they saw something of concern. Regional transit lines were also advised of a security threat.

Driver was under a court order from earlier this year to not associate with any terrorist organization, including the Islamic State group. In February, Driver's lawyer and the prosecutor agreed to a peace bond stating there are "reasonable grounds to fear that he may participate, contribute directly or indirectly in the activity of a terrorist group."

Winnipeg-based lawyer Leonard Tailleur, who handled Driver's peace bond, said he was "shocked" to hear what had happened.

"Saddened to hear that it had to end this way for him," Tailleur said in an email to the Canadian Press.

Driver was first picked up in Winnipeg in June 2015.

Amarnath Amarasingam, a post-doctoral fellow at Dalhousie University who studies radicalization and terrorism, maintained in 2015 that Driver had posted for several months on social media about disliking Canada and about a desire to move overseas.

Mounties applied for the peace bond, which can impose limits on Driver's activities, alleging in provincial court documents that investigators believed he might help with terrorist group activities.

When Driver was released later that month, he was ordered to wear a GPS tracking device and banned from going on the internet or having any communication with the Islamic State group, including wearing or carrying anything with an IS logo.

His bail conditions drew criticism from the Manitoba Association of Rights and Liberties. Later, the government announced that some of his strict bail conditions had been lifted and that he would not be going to trial.

Driver was allowed to remove his monitoring bracelet but continued to be prohibited from using a computer or cellphone — rules that were to be in place until the end of August.

Canadian Public Safety Minister Ralph Goodale said he had spoken to Prime Minister Justin Trudeau about the police operation Wednesday night "to confirm that public safety has been and continues to be properly protected."

He said the RCMP, the Canadian Security Intelligence Service and other police and security agencies were involved in the operation. He also said the national terrorism threat level for Canada remains at "medium," where it has stood since the fall of 2014.

After a 2014 shooting rampage by a lone gunman at Parliament in Ottawa, a Canadian police report said the attack that killed a soldier showed that Canada was "ill-prepared" to stop terrorist attacks.

The Ottawa attack came two days after a man, described by authorities as an Islamic State group-inspired terrorist, ran over two soldiers in a parking lot in Quebec, killing one and injuring the other before being shot to death by police. That attacker had been under surveillance by Canadian authorities.