Munich shooter was a loner, planned attack for over a year 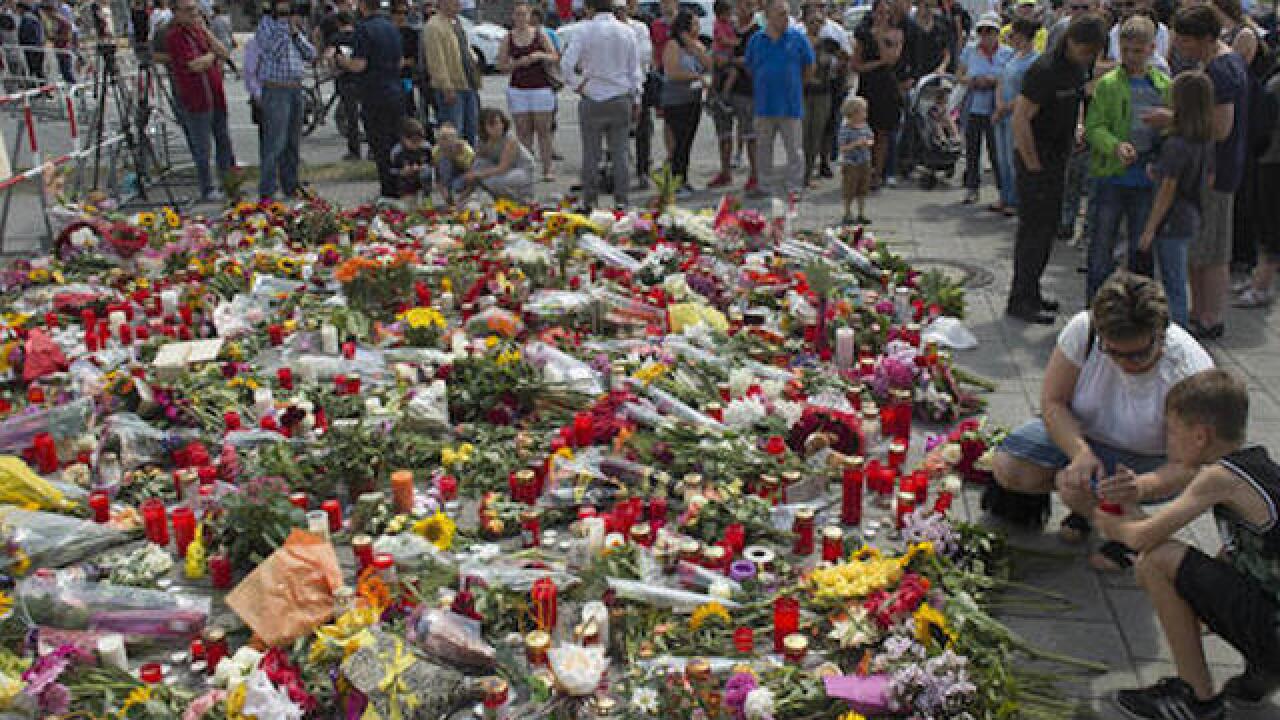 MUNICH (AP) — The teenager behind the deadly shooting rampage in Munich was a withdrawn loner obsessed with playing "killer" video games in his bedroom, a victim of bullying who suffered from panic attacks set off by contacts with other people, investigators said Sunday, adding that he had planned the attack for a year.

Law enforcement officials piecing together a portrait of the 18-year-old shooter said he was seeing a doctor up to last month for treatment of depression and psychiatric problems that began in 2015 with inpatient hospital care and then was followed up with outpatient visits.

They said medication for his problems had been found his room. But toxicological and autopsy results were still not available, so it's not yet clear whether he was taking the medicine when he went on his shooting spree Friday, killing nine people and leaving dozens wounded.

The 18-year-old German-Iranian, identified only as David S. due to Germany privacy laws, had earlier been described by investigators as being bullied by schoolmates at least once four years ago and being fascinated by previous mass shootings. None of the bullies were among his victims, however, adding that none of those killed were known to him, investigators said.

The attack Friday took place on the fifth anniversary of the killing of 77 people by Norwegian right-wing extremist Anders Behring Breivik, whose victims included dozens of young people. Investigators said the Munich shooter had researched that slaughter online and had visited the site of a previous school shooting in the German town of Winnenden last year.

"He had been planning this crime since last summer," said Robert Heimberger, Bavaria's top official, citing a "manifesto" linked to the shooting found in the gunman's locked room in the apartment he shared with his parents and brother.

Heimberger said he could not reveal details of the document yet because there were "many more terabytes" of information to evaluate, but described the gunman as a "devoted player" of group internet "killer games" pitting virtual shooters against each other.

Weapons are strictly controlled in Germany and police are still trying to determine exactly how the shooter obtained the Glock 17 used in the attack.

Heimberger said it's "very likely" the suspect purchased the weapon illegally online on the "darknet," a restricted access computer network often used by criminals. He said the weapon had been rendered unusable and sold as a prop before being restored to its original function.

The shooter's father saw a video of the start of his son's rampage on social media and went to police as it was taking place, Heimberger said, adding that the family was still emotionally not up to questioning by police.

Witnesses say the gunman shouted slurs against foreigners, even though he himself was the German-born son of Iranian asylum-seekers

Heimberger said the McDonald's restaurant were most of the victims died was a hangout for youths of immigrant backgrounds, and the dead included victims of Hungarian, Turkish, Greek, and Kosovo Albanian backgrounds and a stateless person.

The restaurant remained cordoned off Sunday, as nearby residents and relatives of the victims gathered for a second day to pay their respects.

Across the street, at the shopping mall where the rampage spilled over from the restaurant, the pavement was covered by a long line of flowers, some with messages of condolences. One woman, dressed in black, knelt and cried before being escorted away by an acquaintance.

"Today, I feel deep sadness," said Veljo Raicevic, a resident. "Why can one person do something like this?"

Fatu Sherrit Schmidt was among those visiting the site.

"Some of the kids who died happened to be my son's friends," she said. As for the shooter, "his younger brother was at my son's birthday two years ago."

In the aftermath of the attack, Bavaria's top security official urged the government to allow the country's military to be deployed in support of police during attacks. Because of the excesses of the Nazi era, Germany's post-war constitution only allows the military, known as the Bundeswehr, to be deployed domestically in cases of national emergency.

But state Interior Minister Joachim Herrmann told the Welt am Sonntag newspaper that the regulations are now obsolete and that Germans have a "right to safety."

"It would be completely incomprehensible ... if we had a terrorist situation like Brussels in Frankfurt, Stuttgart or Munich and we were not permitted to call in the well-trained forces of the Bundeswehr," he said.

Federal Interior Minister Thomas de Maiziere backed the idea, saying it would make sense to call on the military in emergency situations. He suggested that it might be possible without constitutional changes, saying the nation's highest court has previously ruled "the Bundeswehr can support the police with its forces in particularly dangerous situations."

Munich deployed 2,300 police officers to lock down the city Friday night, calling in elite SWAT teams from around the country and neighboring Austria.

It was the second attack targeting victims at random in less than a week in Bavaria. On Monday, a 17-year-old Afghan asylum-seeker wounded five people in an ax-and-knife rampage near Wuerzburg for which the Islamic State group has claimed responsibility.