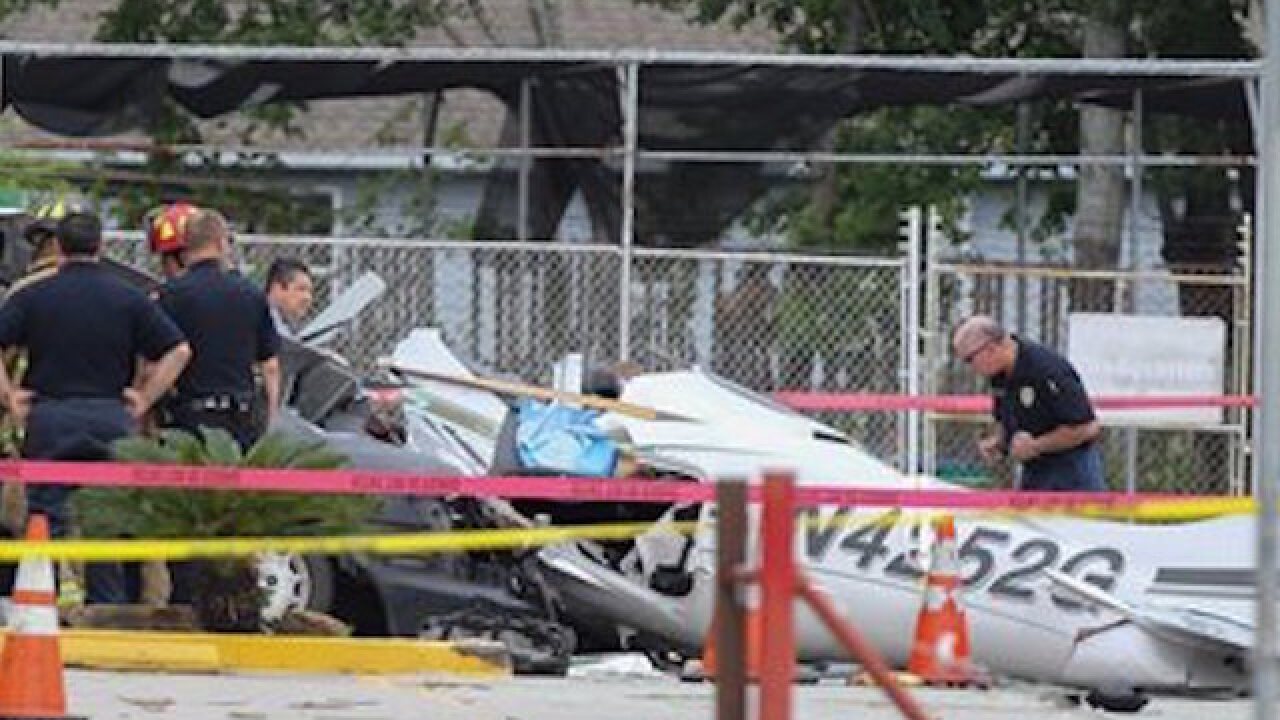 Steve Gonzales
<p>Police and fire officials investigate the scene where a small plane crashed into a car in a parking lot near a Houston airport on Thursday, June 9, 2016. The aircraft had been trying to land at Hobby Airport, in the southeastern part of the city, when it crashed less than a mile northwest of the airport, said Lynn Lunsford, a spokesman for the Federal Aviation Administration. (Steve Gonzales/Houston Chronicle via AP) MANDATORY CREDIT</p>

HOUSTON (AP) — A small plane crashed into a car Thursday in a parking lot near a Houston airport, killing three people aboard the aircraft, fire officials said.

Houston Fire Department spokesman Jay Evans said the plane crashed shortly after 1 p.m. into a car that was parked at a hardware store near Hobby Airport in the southeastern part of the city. Fire Capt. Ruy Lozano said officials believe the three people killed in the accident were on the plane.

No one was in the parked car that was hit by the plane, Lozano said.

"It didn't strike the building. No fire. No fuel spill," he said.

Evans said no other injuries were reported.

Witnesses said the plane appeared to have fallen from the sky and dropped to the ground.

"There was a great big loud noise, like a bomb and a real screechy noise. When I looked out I saw the plane in the parking lot," Susan Conklin, who was in her resale shop across the street from the hardware store when the crash occurred, said in a phone interview.

Conklin said that after the crash, she didn't see any movement from inside the plane and people didn't immediately rush to the plane over concern it might explode.

The single-engine Cirrus SR-22 aircraft had been trying to land at Hobby Airport when it crashed less than a mile northwest of the airport, said Lynn Lunsford, a spokesman for the Federal Aviation Administration.

It was not immediately known what caused the plane to crash. Lunsford said the National Transportation Safety Board will be in charge of the crash investigation.

Records in the FAA registry show the plane was registered to Safe Aviation LLC in Moore, Oklahoma, and had been manufactured in 2012. Officials with Safe Aviation could not immediately be reached for comment. A phone listing for the company could not be found.

According to the flight-tracking website FlightAware, the plane had departed from near Norman, Oklahoma, at 10:11 a.m. CDT. The website also showed that in the last 15 minutes of its flight, the plane's altitude greatly fluctuated, going from 1,800 feet down to 200 feet and back up to 1,200 feet before crashing.