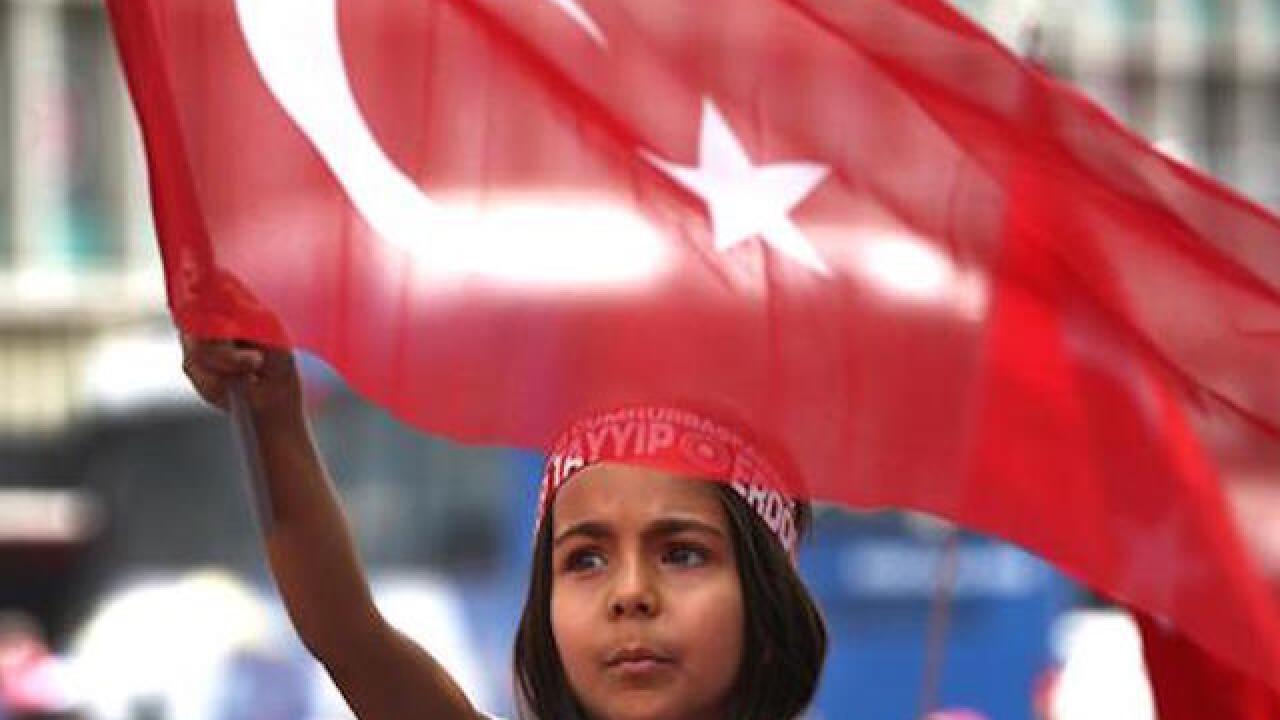 Hussein Malla
<p>A Turkish girl wearing a headband bearing the name of Turkish president Recep Tayyip Erdogan waves her nation flags during a pro-government demonstration in front of the old parliament building, in Ankara, Turkey, Wednesday, July 20, 2016. The coup has led to public anger and calls for the government to reinstate capital punishment, while the state-run religious affairs body declared no religious rites would be performed for the coup plotters killed in the uprising. (AP Photo/Hussein Malla)</p>

Recep Tayyip Erdogan said that the measure was being taken to counter threats to Turkish democracy and wasn't intended to curb basic freedoms. He spoke after a meeting with Cabinet ministers and top security advisers.

"The aim is to rapidly and effectively take all steps needed to eliminate the threat against democracy, the rule of law and the people's rights and freedoms," Erdogan said.

"This measure is in no way against democracy, the law and freedoms," he added. "On the contrary it aims to protect and strengthen them."

The president, who has said he narrowly escaped being killed or captured by renegade military units, suggested that purges would continue within military ranks.

"As the commander in chief, I will also attend to it so that all the viruses within the armed forces will be cleansed," Erdogan said.

Turkey had imposed martial law-like emergency rule in the southeast of Turkey in 1987, allowing officials to set curfews, issue search and arrest warrants and restrict gatherings as the security forces fought Kurdish rebels in the region. The emergency rule was gradually lifted by 2002.

The latest insurrection by some military units was launched late Friday, but security forces and protesters loyal to the government quashed the rebellion.

Erdogan says the pro-government death toll in the botched coup was 246. At least 24 coup plotters were also killed.

Cracking down on alleged subversives in education, Turkey also said Wednesday that it would close more than 600 private schools and dormitories following the attempted coup, spurring fears that the state's move against perceived enemies is throwing key institutions in the NATO ally into disarray.

Erdogan's government said it has fired nearly 22,000 education ministry workers, mostly teachers, taken steps to revoke the licenses of 21,000 other teachers at private schools and sacked or detained half a dozen university presidents in a campaign to root out alleged supporters of a U.S.-based Muslim cleric blamed for the botched insurrection on Friday.

Earlier, Erdogan suggested in an interview with the Qatar-based Al-Jazeera TV network that coup plotters might still be active in the weeks ahead.

"I don't think we have come to the end of it yet," the president said.

The targeting of education ties in with Erdogan's belief that the U.S.-based cleric, Fethullah Gulen, whose followers run a worldwide network of schools, seeks to infiltrate the Turkish education system and other institutions in order to bend the country to his will. The cleric's movement, which espouses moderation and multi-faith harmony, says it is a scapegoat for what it describes as the president's increasingly autocratic conduct.

While Erdogan is seeking to consolidate the power of his elected government in the wake of the attempt to oust him, his crackdown could further polarize a country that once enjoyed a reputation for relative stability in the turbulent Middle East region. It also raises questions about the effectiveness of the military, courts and other institutions that are now being purged.

"The fact that so many judges have been detained, never mind the workload at the courthouses, will render them inoperable," said Vildan Yirmibesoglu, a human rights lawyer. "How they will fill the vacancies, I don't know."

The education ministry said it decided to close 626 private schools and other establishments that are under investigation for "crimes against the constitutional order and the running of that order," the state-run Anadolu news agency reported.

The agency said the schools are linked to Gulen, a former ally of Erdogan who lives in self-imposed exile in Pennsylvania and has denied accusations that he engineered the coup attempt that was quashed by security forces and protesters loyal to the government.

Turkey has repeatedly named Gulen as the instigator of its turmoil and demands his extradition from the United States. U.S. Secretary of State John Kerry said Wednesday that Turkey must provide hard evidence that Gulen was behind the foiled coup if it wants him extradited, and that mere allegations of wrongdoing wouldn't suffice.

The two allies cooperate in the U.S.-led war against the Islamic State group, with American military planes flying missions from Turkey's Incirlik air base into neighboring Iraq and Syria.

Turkey's domestic situation is increasingly a concern as the government seeks to rid broad sectors of society of alleged antagonists. Huseyin Ozev, an education union leader in Istanbul, said state education workers who were reported to have been fired had not received notices and that employees were "waiting at home or on vacation, anxiously," to see if they had lost their jobs.

Any workers suspected of wrongdoing should undergo a formal investigation and the fight against coup plotters "should not be turned into a witch hunt," Ozev said.

In other moves against education, Turkey demanded the resignations of 1,577 university deans and halted foreign assignments for state-employed academics. A total of 50,000 civil service employees have been fired in the purges, which have reached Turkey's national intelligence service and the prime minister's office.

The government has also revoked the press credentials of 34 journalists because of alleged ties to Gulen's movement, Turkish media reported. A satirical magazine, Leman, said authorities blocked the distribution of a special edition over its cover featuring a caricature in which two mysterious hands play a game of strategy, one pushing soldiers onto the board and the other responding by sending civilians.

Authorities have rounded up about 9,000 people — including 115 generals, 350 officers, 4,800 other military personnel and 60 military high school students — for alleged involvement in the coup attempt. Turkey's defense ministry has also sacked at least 262 military court judges and prosecutors, according to Turkish media reports.

The coup has led to public anger and calls for the government to reinstate the death penalty, a demand that Erdogan has said he will consider.

Hasan Ay, a municipal worker in Istanbul, said he wanted coup ringleaders to be executed.

"I am not talking about the private soldiers. They said on television that some of the privates were innocent," Ay said.

The instability is hurting confidence in the Turkish economy. The Turkish currency dropped 1.8 percent against the U.S. dollar Wednesday, trading at a low for the year of just over 3 lira to the dollar.