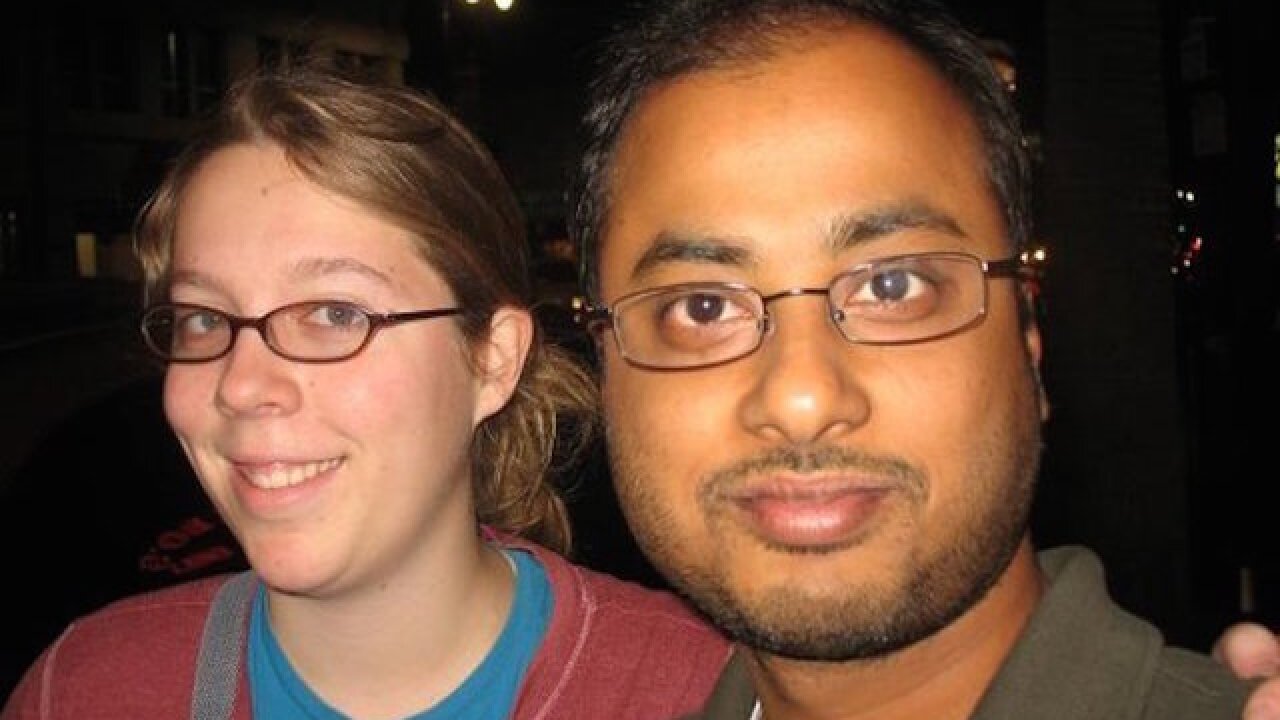 Copyright Associated Press
<p>This undated photo shows Ashley Hasti, left, and Mainak Sarkar, who police say carried out a murder-suicide at the University of California, Los Angeles on Wednesday, June 1, 2016. Sarkar had a "kill list" with multiple names that included professor Bill Klug, Hasti who was found dead in a Minneapolis suburb and another UCLA professor who was not harmed, a law enforcement official with knowledge of the investigation told The Associated Press.</p>

LOS ANGELES (AP) — The path to the campus shooting death of a UCLA professor began nearly 2,000 miles away in Minnesota.

There, a former student with a grudge, Mainak Sarkar, killed his estranged wife.

Sarkar then made the long drive to Los Angeles where he found his former mentor, engineering professor William Klug, and shot him before turning the gun on himself, authorities said Thursday.

Both victims were on a "kill list" police found at Sarkar's Minnesota apartment. A third person on the list, another UCLA professor, was spared because he was not on campus Wednesday when Sarkar arrived with two semi-automatic pistols, police said.

Authorities did not publicly identify the unharmed professor or the woman. A law enforcement official with knowledge of the investigation told The Associated Press the woman on the list was Ashley Hasti, who documents show married the gunman in 2011.

The investigation unfolded rapidly based on a note Sarkar left in the office where he killed Klug. It asked anyone who read it to check on Sarkar's cat in St. Paul, Minnesota.

At Sarkar's apartment, authorities found his list of three planned targets. They checked the home of the woman in the nearby town of Brooklyn Park and found her body.

The law enforcement official said Hasti was the name of the woman on Sarkar's list. Beck said the woman named on the list was the victim; and a neighbor told AP that Hasti lived in the home with her father.

The official who said Hasti's name was on the list was not authorized to publicly discuss the case and spoke on condition of anonymity.

Gordy Aune Jr., who lives three doors away and is the neighborhood watch commander, said Hasti and her father kept to themselves.

Hasti's grandmother, Jean Johnson, said the two remained together for only about a year, but didn't get a divorce because Hasti couldn't afford one.

"They just didn't get along," Johnson told the Minneapolis Star-Tribune. "The only enemy she had was him, I guess. I never thought he would do something like that."

Hasti hadn't mentioned any recent animosity with Sarkar, she said.

Sarkar had disparaged Klug online and the professor knew of his contempt, but police have not uncovered any death threats, Beck said. The writings contained "some harsh language, but certainly nothing that would be considered homicidal," he said.

A blog post written in March by someone identifying himself as Sarkar asserted that Klug "cleverly stole all my code and gave it (to) another student" and "made me really sick."

Beck said the investigation showed Sarkar's claims of stolen code are "a making of his own imagination."

Sarkar, 38, and Klug, 39, once were close. In his 2013 dissertation about using engineering to understand the human heart, the student thanked the professor "for all his help and support. Thank you for being my mentor."

Sarkar grew up in Durgapur, India, an industrial town where his father worked as a clerk in a cement manufacturing company. Residents there remembered Sarkar as a diligent student.

A former classmate at Durgapur's Bidhan Institute — where Sarkar studied for two years after high school before attending the Indian Institute of Technology in Kharagpur — said he was "totally stupefied" by the news of the shooting.

"Mainak was a very good student. In school, he looked so innocent and was well-behaved," said Mridul, who like many people in India uses only one name. But Mridul said Friday he was not in touch with Sarkar after he left for a life in the United States.

Sarkar's LinkedIn page shows he obtained a master's degree at Stanford University after graduating in 2000 from the Indian Institute of Technology with a degree in aerospace engineering.

He most recently was listed as an engineering analyst at a Findlay, Ohio, company called Endurica. Company president Will Mars said Sarkar left in August 2014.

It's unclear what he had been doing since.

Colleagues, family and friends described Klug as a kind, devoted father and teacher. He is survived by his wife and two children, a 9-year-old boy and 7-year-old girl.

On campus Thursday night, hundreds of students, staff and faculty gathered for a vigil for Klug, holding up their cellphones like candles to light up the night sky.

"Bill was so much more than my soul mate," his wife, Mary Elise Klug, said in a statement. "I will miss him every day for the rest of my life."