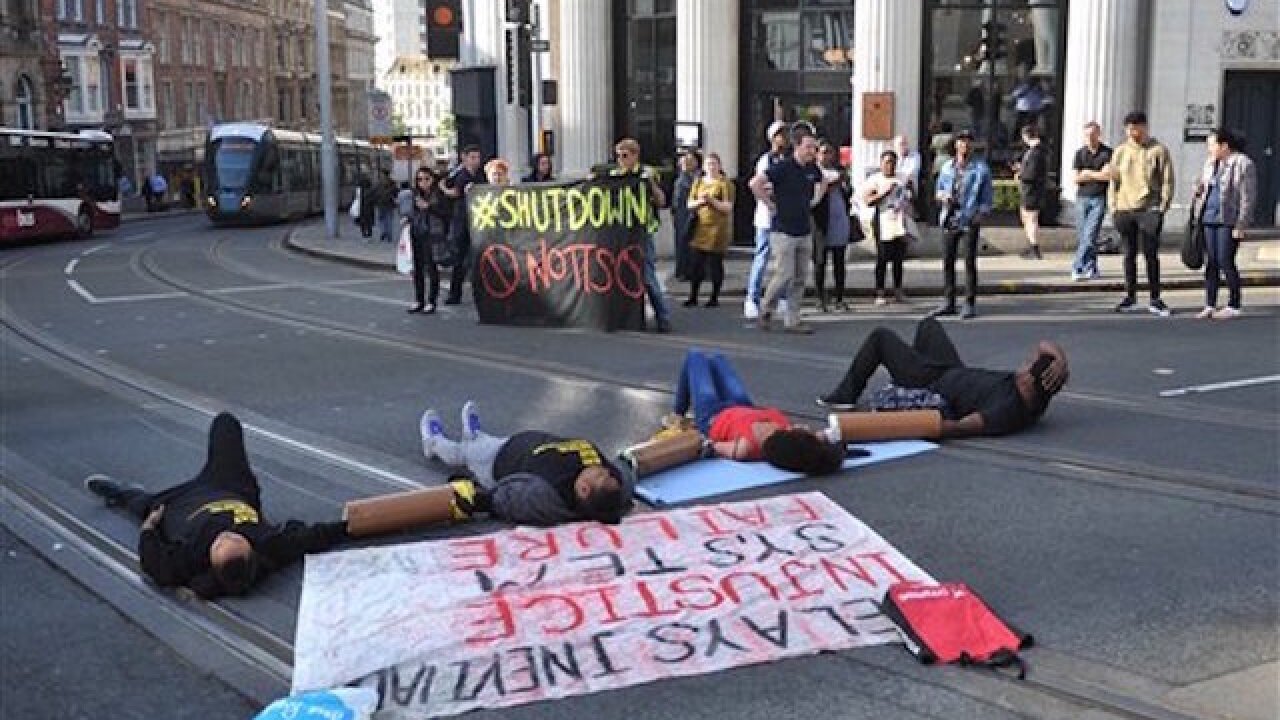 Copyright Associated Press
Edward Smith
<p>Activists lay on the road outside Nottingham Theatre Royal as they attempt toshut down part of the city centre tram and bus network in Nottingham, England Friday Aug. 5, 2016 to protest for social justice movement Black Lives Matter. Activists affiliated with the U.S.-based group Black Lives Matter have blocked a road leading to Heathrow Airport, and Nottinghamand city centre and in other British cities (Edward Smith/PA via AP)</p>

Organizer Joshua Virasami told the BBC that the movement — founded to protest the killings of black people by American police — was needed "in Britain and all over the world."

U.K. Black Lives Matter said in a statement it was holding a "shutdown" of roads in London and other cities to "mourn those who have died in custody and to protest the ongoing racist violence of the police, border enforcement, structural inequalities and the everyday indignity of street racism."

London's Metropolitan Police said officers arrested 10 people blocking a road leading from a main highway to Heathrow on Friday morning, including six who were "locked" to one another.

Photos showed police moving a group of people attached together lying across the road beside a banner saying "this is a crisis."

Police said one lane of the road was open but traffic was backed up getting into one of the world's busiest airports. Heathrow said it was not aware of passengers missing flights because of the protest.

In other protests, a small group of demonstrators in the central England city of Nottingham disrupted public transport by lying down on tram tracks, and police removed protesters from a road near Birmingham Airport, 100 miles (160 kilometers) north of London.

The protesters said they were marking the fifth anniversary of the death of Mark Duggan, a 29-year-old black man shot by London police under disputed circumstances on Aug. 4, 2011. The killing sparked Britain's worst civil disorder in decades, several nights of rioting that spread from London to cities around the country.

Activists say black men in Britain are unfairly targeted by law enforcement and disproportionately represented among prison inmates. According to official figures, 26 percent of inmates in England and Wales are non-white, compared to 12 percent of the overall population there.