White House drafted a statement on John McCain, but never released it 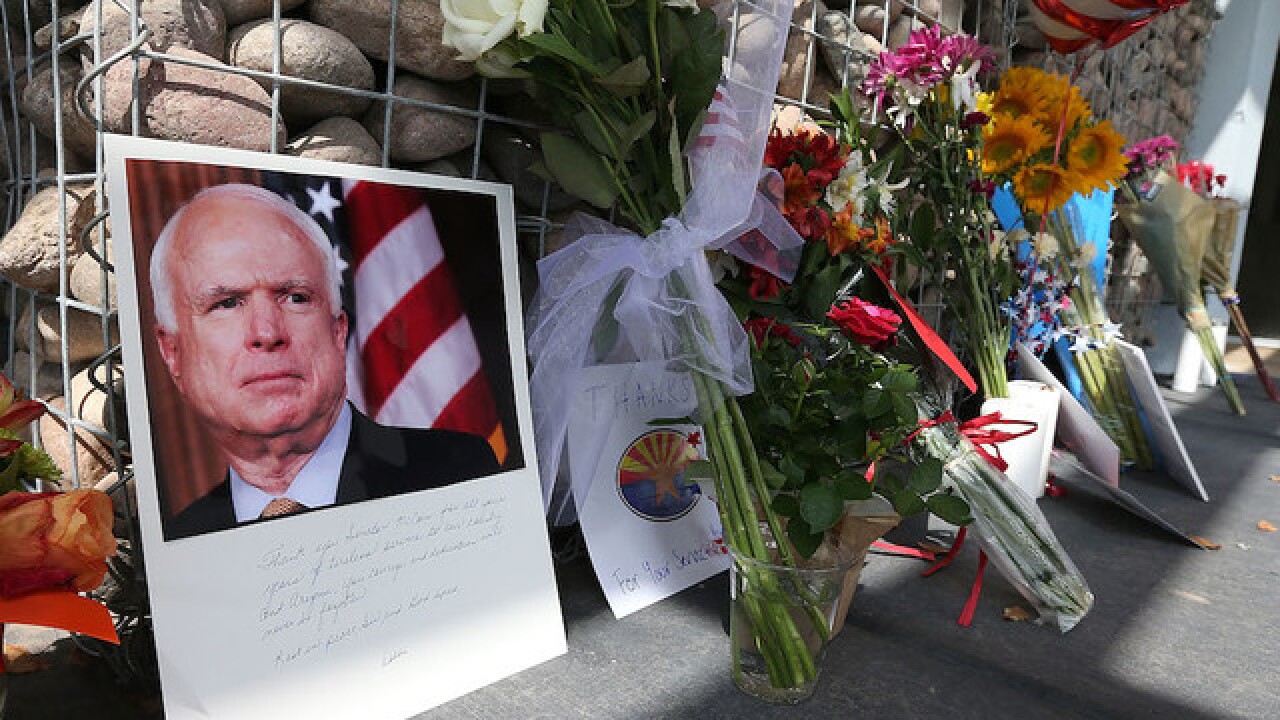 Image copyright 2018 Getty Images. All rights reserved. This material may not be published, broadcast, rewritten, or redistributed.
Ralph Freso
<p>Items and personal notes are left outside the office of Sen. John McCain (R-AZ) as people pay their respects to the late Arizona senator on August 26, 2018 in Phoenix, Arizona. McCain passed away on Saturday, August 25, 2018 after a long battle with Glioblastoma, a form of brain cancer. </p>

White House aides drafted a fulsome statement for President Donald Trump on the death of Sen. John McCain, but it was never sent out, a person familiar with the matter confirmed to CNN.

Several staff members believed the official White House statement, which went through an internal approval process, would be released at the time of the Arizona Republican's death, which occurred on Saturday. But as the President spent Sunday at his Virginia golf course, the statement never went out, the source said.

White House aides did not make plans for a televised statement on McCain's passing, which would have been routine under similar circumstances in other recent presidencies.

The Washington Post reported Sunday that Trump went against the advice of senior aides to issue an official White House statement praising McCain for his heroism and decades of service, telling aides he instead wanted to post a brief tweet.

Trump's tweet Saturday night did not mention his military or Senate service or include any praise for the late Arizona Republican.

Another source familiar with the matter also confirmed to CNN that there had been plans to go further than just the Twitter post released by the President.

The Post, which cited current and former White House aides who requested anonymity to discuss sensitive internal deliberations, said White House chief of staff John Kelly, press secretary Sarah Sanders and other staff urged the release of an official statement calling McCain a "hero" and praising him for his extensive service to the country.

Trump and McCain had a tense relationship, and McCain was one of the administration's most outspoken Republican critics.

After Trump's joint press conference with Russian President Vladimir Putin in July, in which Trump did not endorse US intelligence findings on Russian election meddling over Putin's denial, McCain said: "The damage inflicted by President Trump's naivete, egotism, false equivalence, and sympathy for autocrats is difficult to calculate. But it is clear that the summit in Helsinki was a tragic mistake."

As a presidential candidate, Trump -- who did not serve in the military himself and avoided the draft through a series of deferments -- attacked McCain's record of service and said the Vietnam veteran and former prisoner of war is "not a war hero" because he was captured.

"I like people that weren't captured," Trump said. Trump later acknowledged that McCain was a hero, but refused to apologize in subsequent interviews.

In May, CNN reported McCain did not want Trump at his funeral.

Following McCain's death, other members of the Trump administration, including Defense Secretary James Mattis, Secretary of State Mike Pompeo, and US Ambassador to the UN Nikki Haley, joined political leaders in the United States and around the world in heaping accolades on the senator -- contrasting with the White House's response. In statements on Twitter, first lady Melania Trump and Vice President Mike Pence thanked and honored McCain's service and offered condolences.

And Trump's re-election campaign also released a statement offering condolences and urging Americans to remember McCain and his family -- words that did not explicitly praise the senator.

Tributes to McCain continued to pour in from former US presidents, members of Congress and foreign leaders while Trump golfed on Sunday. His Twitter feed was largely silent except for retweets of his own posts criticizing the investigation into Russian election interference and boasting about the growing economy.