Woman who climbed Statue of Liberty's base is federally charged, faces time in prison 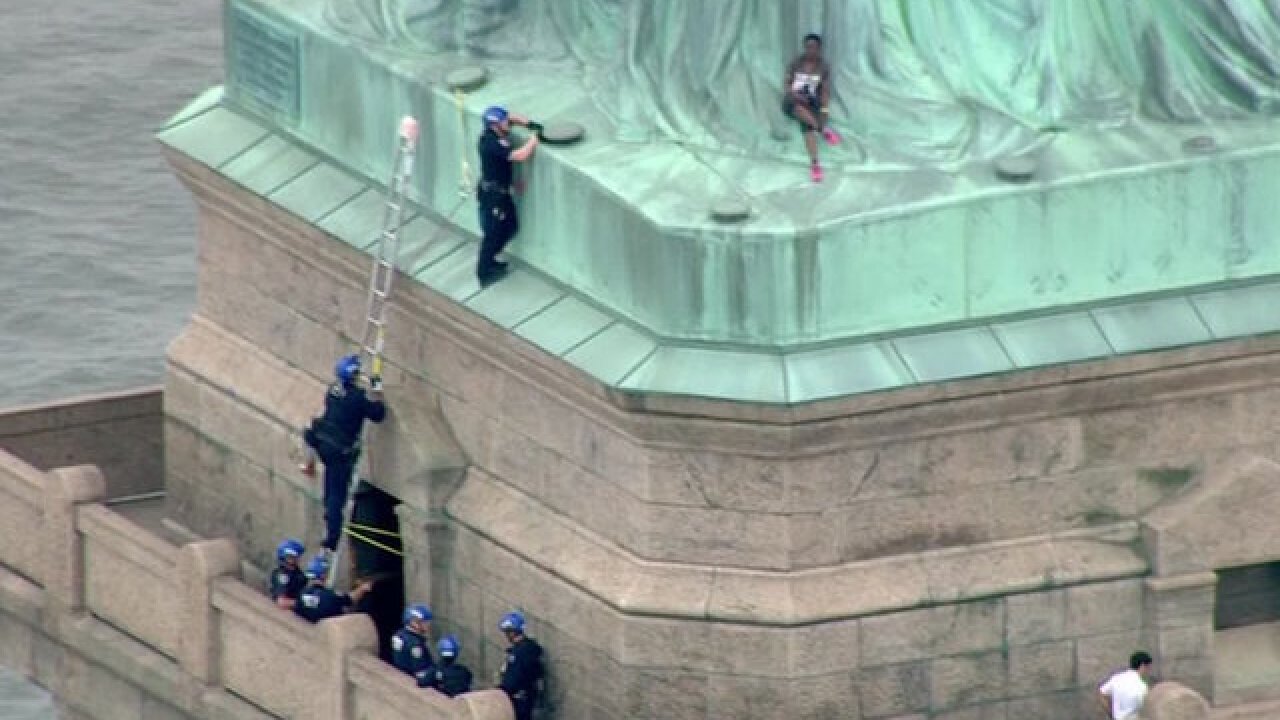 © 2018 Cable News Network, Inc.
WPIX
<p>A woman climbed the base of the Statue of Liberty, and seven people were arrested on Liberty Island, all of whom are believed to be protesters.</p>

NEW YORK — A woman who climbed the base of the Statue of Liberty to protest the separation of migrant families was charged with three federal counts and could face up to 18 months in prison, according to federal prosecutors.

Therese Okoumou, 44, was charged with trespassing, interference with government agency functions, and disorderly conduct on Thursday for what US Attorney Geoffrey S. Berman called a "dangerous stunt."

For nearly three hours, Okoumou crossed the base of Lady Liberty and refused orders from police to get down. She declared she wouldn't come down until "all the children are released," a source with the New York Police Department told CNN.

"She just kind of mentioned the kids in Texas," Officer Brian Glacken said in a news conference Wednesday evening. "I guess the whole debate that's going on about that. In the beginning, she threatened to push us off, push the ladder off, but we stayed with her."

Liberty Island was evacuated as police attempted to get Okoumou to the ground. Eventually, officers put a harness and ropes on her, and she went with the officers to where a ladder was propped up on the base of the statue.

"While we must and do respect the rights of the people to peaceable protest, that right does not extend to breaking the law in ways that put others at risk," Berman said.

Statue Cruises, which provides trips to the Statue of Liberty and Ellis Island, turned away as many as 3,000 people because of the statue climber, company representative Rafael Abreu said. The Fourth of July is normally one of the company's biggest days of the year, and it typically sees 22,000 visitors on summer days.

"This incident caused disruption to thousands of visitors on one of the busiest days of the year at the Statue of Liberty," US Park Police Major Pamela Smith said.

Okoumou is expected to appear before a federal magistrate judge on Thursday afternoon, according to a news release from the Southern District of New York. Each of the three charges has a maximum penalty of six months in prison.

Okoumou is affiliated with the protest group Rise and Resist, according to Martin Joseph Quinn, an organizer of the group. But her climb was not part of the planned protest and was done without the group's knowledge, Quinn said.

Other Rise and Resist protesters unfurled a banner over a railing around the base of Lady Liberty saying "Abolish ICE!" and at least seven people were arrested on Liberty Island.

Police believe other protesters boosted Okoumou to the base of the statue, New York Police Lt. Michael McGuinness said.