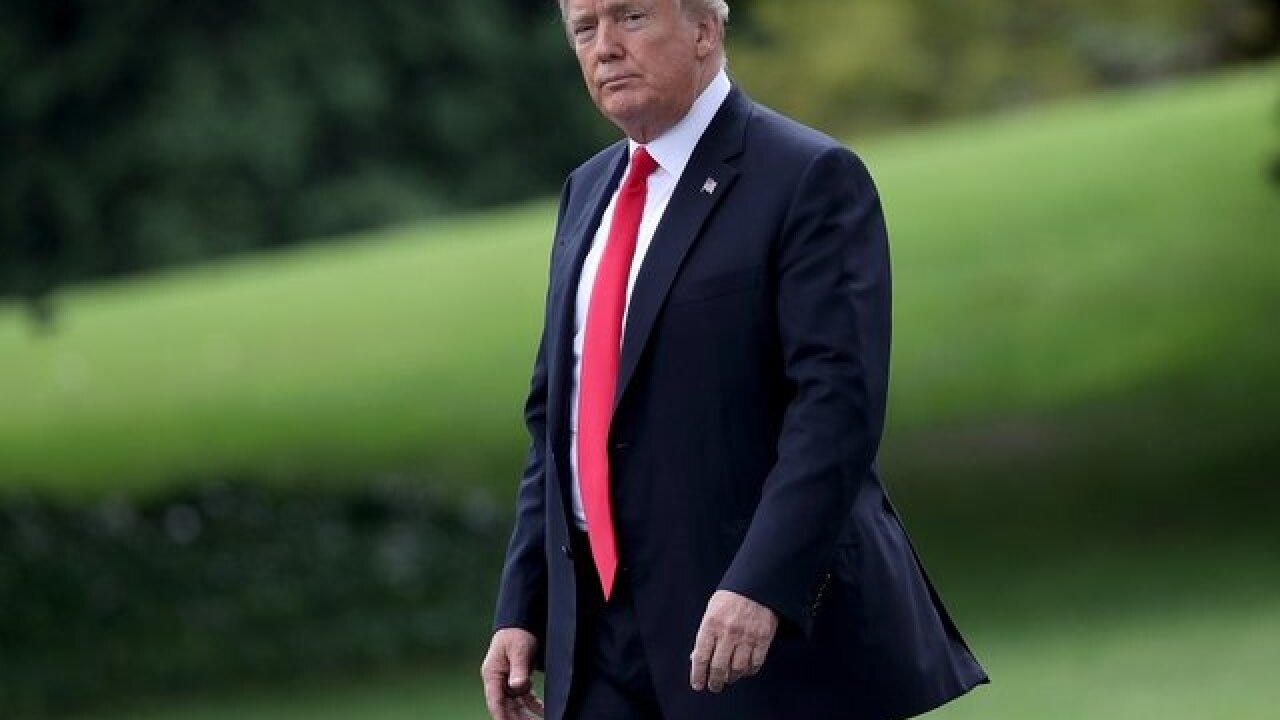 Trump, speaking at a rally in Missouri, did not explicitly mention the Rosenstein furor, which was first reported by The New York Times and confirmed by The Associated Press.

But Trump lashed out against what he sees as anti-Trump bias in the Justice Department, touting the firings he has orchestrated, unnerving many in federal law enforcement and sparking fears about the future of the special counsel's Russia probe, which Rosenstein oversees.

"You've seen what happened in the FBI and the Department of Justice. The bad ones, they're all gone. They're all gone," Trump said. "But there is a lingering stench and we're going to get rid of that, too."

One person present during Rosenstein's remarks said he was being sarcastic. The Times also said he raised the idea of using the 25th Amendment to remove Trump as unfit for office. Rosenstein said the story is "inaccurate and factually incorrect."

It was the latest storm to buffet the White House, which this week was battered by a number of potentially damaging stories. Beyond the speculation about Rosenstein, it was revealed that Trump's former fixer, Michael Cohen, is cooperating with special counsel Robert Mueller's investigation. The president also backed off his plan to declassify documents related to the ongoing probe, and the fate of his Supreme Court nominee remained uncertain.

Negotiations continued Friday about a possible appearance by Christine Blasey Ford, the woman who accused Judge Brett Kavanaugh, Trump's nominee, of sexual assault at a high school party more than three decades ago. Trump made the future of Kavanaugh and the federal judiciary a centerpiece of his rally in Springfield, which was designed to support the state's Republican Senate candidate, Missouri Attorney General Josh Hawley, in his race against Democratic incumbent Claire McCaskill.

"I don't know who she is with but she is not with the state of Missouri," Trump said. "(Kavanaugh) is a fantastic man, a fantastic man. She won't vote for him."

But Trump, who used Twitter earlier Friday to cast doubt on Ford's claim, preached optimism on Kavanaugh, saying "he was born for the U.S. Supreme Court" and reassuring the crowd that "it's going to happen. It's going to happen."

He added: "We have to fight for him, not worry about the other side. And by the way, women are for that more than anybody would understand."

When Hawley praised Trump's judicial picks, the crowd began chanting Kavanaugh's name. And the president, drawing energy from a packed, raucous crowd, dished out plenty of red meat, pledging to build his signature border wall, telegraphing that he is willing to escalate trade conflicts with both China and Western allies and suggesting he was "willing to wait" to make a peace deal with North Korea. He also took a swipe at Sen. John McCain, who died away last month, for sinking the GOP health care bill, though he did not mention the late war hero by name.

"They aren't just extreme," he said. "They are frankly dangerous and they are crazy."

The reports about Rosenstein created even greater uncertainty for the deputy attorney general tenure at a time when Trump has lambasted Justice Department leadership and publicly humiliated both Rosenstein and Attorney General Jeff Sessions.

More broadly, it's the latest revelation that could affect Mueller, the special counsel investigating possible coordination between Russia and Trump's presidential campaign in 2016. Sessions recused himself from that issue soon after he took office, to Trump's dismay, and Rosenstein then appointed Mueller. With all that hanging in the air, Trump has resisted calls from conservative commentators to fire both Sessions and Rosenstein and appoint someone who would ride herd more closely on Mueller or dismiss him.

A number of key FBI officials, including director James Comey and deputy director Andrew McCabe, have been fired since Trump took office.

Republicans view the McCaskill-Hawley contest as one of their best chances of flipping a seat in the Senate, where the GOP has a slim 51-49 majority, and polls show it's a toss-up. Democrats are hoping the enthusiasm that's put the GOP-led House in play will spill over to the Senate, though the map there is much tougher. McCaskill is among 10 Democratic incumbents seeking re-election in states Trump won — some by wider margins than Missouri.

Hawley, the state's 38-year-old first-term attorney general, was on Friday repeatedly called a "star" by Trump, who carried Missouri by 19 percentage points in 2016.

Trump's rally for Hawley came a day after he held one for the Republican incumbent senator widely considered to be the most vulnerable, Dean Heller of Nevada. With the chances of Republicans keeping control of the House of Representatives looking increasingly dismal, the White House has fixated on keeping the Senate as a bulwark against any Democratic effort to impeach and then remove Trump from office.

Earlier Friday, Trump visited a Las Vegas-area veterans facility to sign a spending bill that includes nearly $100 billion for veterans care and military construction, though he has continued to warn in recent days that he may be willing to shut down the federal government over spending for border security, including his long-promised wall.