As part of the 2019 city budget, Overland Park approved just over $50,000 in funding to help the fire department develop cancer-reduction strategies.

OVERLAND PARK, Kan. — This month, as part of the city's 2019 budget, the Overland Park City Council approved just more than $50,000 in new funding for the city's fire department. It's specifically meant to improve cancer-reduction strategies, but the funding is just the first step in a long-term goal to protect firefighters from dangers they can’t even see.

When firefighters go into a burning building, they wear a piece of equipment called a hood. It’s literally wrapped around their head, making direct contact with their face and neck. 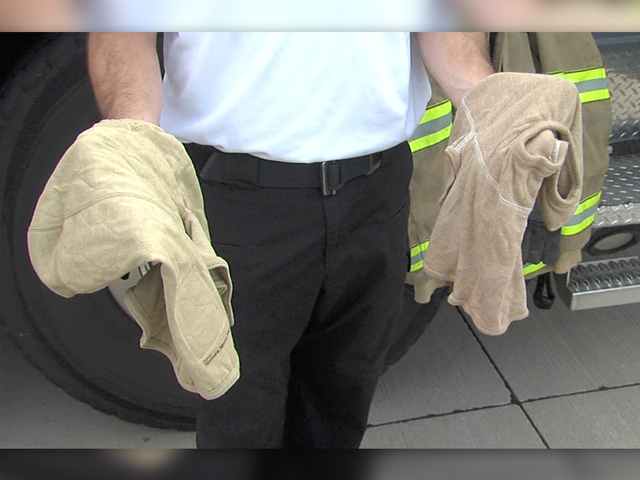 "After a fire, it'll be blackened, it'll be sooty,” OPFD Capt. Andrew Grove said. “It'll be covered in...products of fire."

With these new funds from the city, the department will be purchasing new hoods that are designed to block much more of the chemicals in the smoke that these men and women wade through every day, for decades in some cases.

"Looking at them from a distance, there is no recognizable difference between the two hoods,” Grove said. “But when you feel them and hold them, you can tell that one is just a more robust hood."

“I wish we had done a lot of this 30 years ago,” OPFD Battalion Chief Mark Messinger said.

But fighting cancer in the department can't just be about cleaning the exterior of the uniform after a fire. It’s also about changing the entire mindset of what they're carrying home with them, the threats that are seeping right into the seats of their own fire trucks.

“Two or three days after a good fire, taking a hot shower, and your skin offgassing,” Messinger said. “It never occurred to me what I was doing, or that might be harmful down the road.”

That's why fire departments, including Overland Park, are now taking extra steps, like purchasing two sets of gear, so firefighters always have a clean one to wear. And, they're planning for the future, including buying machines to properly clean all that gear.

“We just have to get out of that mindset of, 'I'm going to take care of me last,'” OPFD Chief Brian Dehner said.

He's not alone. The National Institute for Occupational Safety and Health found that firefighters had higher rates of several types of cancers, and of all cancers combined, than the U.S. population as a whole.

“We have these memorials all throughout the cities, every fire department has one,” Local 42 President Tim Dupin said. “If we never put another name on that wall, it would be good for me.”

Dupin said losing a firefighter, no matter the cause, feels like a failure, and he's pushing for more awareness of just how dangerous fires can be years after they've burned out.

“Firefighting is inherently dangerous, but anything we can do to reduce that is important,” Dupin said. “It's not cool to be dirty — make sure you get your gear clean because it's killing us.”

In July 2018, President Donald Trump signed the Firefighter Cancer Registry Act into law. It requires the Centers for Disease Control and Prevention to create a voluntary registry of firefighters, including the number and type of fires each firefighter attended. It will be used to monitor cancer in the profession.