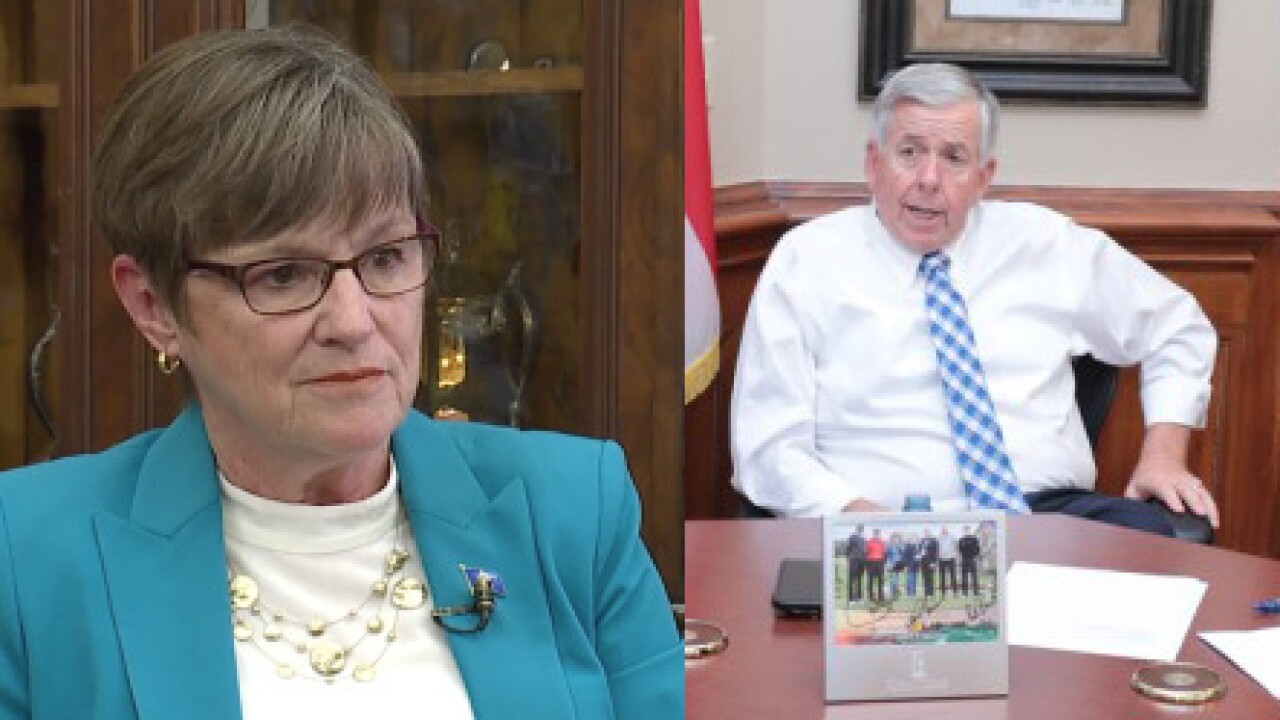 Copyright 2019 Scripps Media, Inc. All rights reserved. This material may not be published, broadcast, rewritten, or redistributed.
Kansas Gov. Laura Kelly (left) has signed an executive order aimed at ending a long-standing &quot;border war&quot; with Missouri over existing jobs in the Kansas City area, but Missouri Gov. Mike Parson has to make some concessions now or the truce will fall apart.

TOPEKA, Kan. (AP) — The governors in Kansas and Missouri have moved to end an economic "border war" that has gained their states unwanted national attention for using millions of dollars in incentives to entice companies into shifting jobs close to the Kansas City-area border.

Their truce appears shaky. An executive order that Democratic Kansas Gov. Laura Kelly signed Friday showed that officials in both states have yet to fully resolve a final sticking point: the ability of cities, counties and other local governments in Missouri to offer more lucrative local tax breaks than their counterparts in Kansas.

If Missouri officials don't stop their generous local tax breaks, Kelly in her order threatens to call off the two states' big, bipartisan deal, even with Friday's declarations that the border war is over.

"The cease fire is in effect," said Kansas Commerce Secretary David Toland. "What we need is for someone to not send a volley that would end the cease fire."

Missouri Gov. Mike Parson, a Republican, signed a law committing his state to calling off the conflict in June. Spokeswoman Kelli Jones said Parson's office is reviewing the order from Kelly, but is encouraged by news of the signing because it will serve both states "through fiscally responsible practices."

Abandoning the competition at the heart of the conflict has been difficult. It has persisted for years and involved dozens of state and local players inside — and outside — government. The physical divide between Kansas and Missouri in the Kansas City region amounts to nothing more than a road, allowing companies to move mere minutes away to cash in on tax breaks.

Financial planning firm Waddell & Reed has been considering moving its headquarters from the Kansas side, even as the two states worked on their truce. Restaurant chain Applebee's International moved its headquarters from Missouri to Kansas in 1993 and back to Missouri in 2011, only to relocate most of the employees to California in 2015.

The nonprofit arm of Hallmark Cards Inc., which has locations on both sides of the border, estimates the two states combined used more than $335 million in incentives since 2011 to shuffle more than 12,000 Kansas City-area jobs.

"It's just counterproductive that we have these incentives when it's not really doing anything," Missouri state Sen. Mike Cierpiot, a Kansas City Republican and author of Missouri's law, said before Kelly issued her order. "Nobody's moving here. Nobody's doing anything. It's just, you're driving a mile the other way or a mile this way to get to work."

Kansas and Missouri immediately drew praise from Washington-based Good Jobs First, which tracks state and local government use of economic development incentives. The group called the states' pact the first of its kind in the nation.

While former Kansas Gov. Sam Brownback, a Republican, sometimes argued his state was winning the economic competition in the Kansas City area, Kelly said Friday that the contest was "wasteful and bad for both states."

Toland said officials in both states agree local officials on the Kansas City area's Missouri side should cease the more generous incentives so the truce can hold. New Kansas City, Missouri, Mayor Quinton Lucas said Friday that he would push for a ban on longer incentives in his city.

The two states "need the local governments to help us," Toland said. Without their cooperation, the truce could be off.

"So, could this start again? Sure," Kelly said. "But I have all the faith both in Missouri and my local communities."