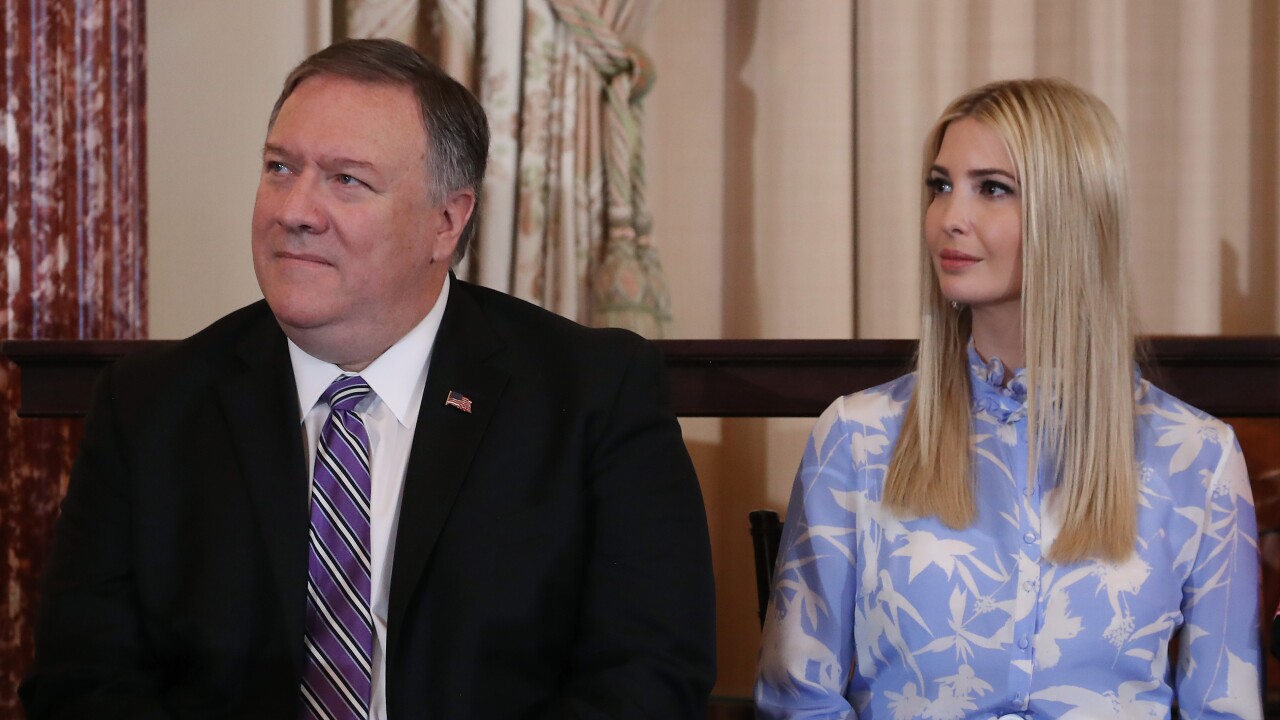 Mark Wilson/Getty Images
U.S. Secretary of State Mike Pompeo and Ivanka Trump attend a ceremony on the 2019 Trafficking in Persons Report at the Department of State on June 20, 2019 in Washington, D.C. The report focuses on government efforts around the world to combat human trafficking and highlights strategies to address this crime and protect its victims. (Photo by Mark Wilson/Getty Images)

TOPEKA, Kan. — U.S. Secretary of State Mike Pompeo plans to visit Wichita later this week for an event about workforce development with Ivanka Trump, an appearance that could raise fellow Republicans' hopes that he'll run for the Senate next year.

It's Pompeo's fourth visit to Kansas this year and it comes less than seven weeks after gave a lecture at Kansas State University last month that intensified speculation about his plans, though he didn't directly address it in his remarks and has remained coy for months.

Pompeo plans to participate in an American Workforce Policy Advisory Board round-table discussion Thursday at Wichita State University Tech about workforce development with Republican Rep. Ron Estes, the congressman's office confirmed. The board is co-chaired by Ivanka Trump.

Estes said in a statement that the event will highlight the university's status as a national leader in workforce development and further a "focus on growing our economy." Kelly Arnold, a former Kansas Republican Party chairman, said the visit puts the university's work in the spotlight for the Trump administration, but it also is a good event for a potential Senate candidate.

"There's still a lot of availability for Secretary Pompeo to make a decision on whether he wanted to come back here and run for Senate, and I think Republicans would welcome him into this race," Arnold said.

Pompeo previously held Estes' Wichita-area seat in Congress, and many Republicans view him as the ideal candidate to replace Republican Sen. Pat Roberts, who is not seeking a fifth term.

Republicans have not lost a U.S. Senate race in Kansas since 1932, but some party leaders fear that Kris Kobach will emerge from the crowded primary field after losing last year's race for governor to Democrat Laura Kelly. Kobach, the former Kansas secretary of state, has built a national profile by advocating tough immigration policies and has alienated GOP moderates.

The Democrats who are running include state Sen. Barbara Bollier, a retired Kansas City-area anesthesiologist, and Usha Reddi, the mayor pro tem of the northeast Kansas city of Manhattan. Bollier has received the endorsement of former U.S. Health and Human Services Secretary Kathleen Sebelius, a Democrat who also served two terms as Kansas' governor.