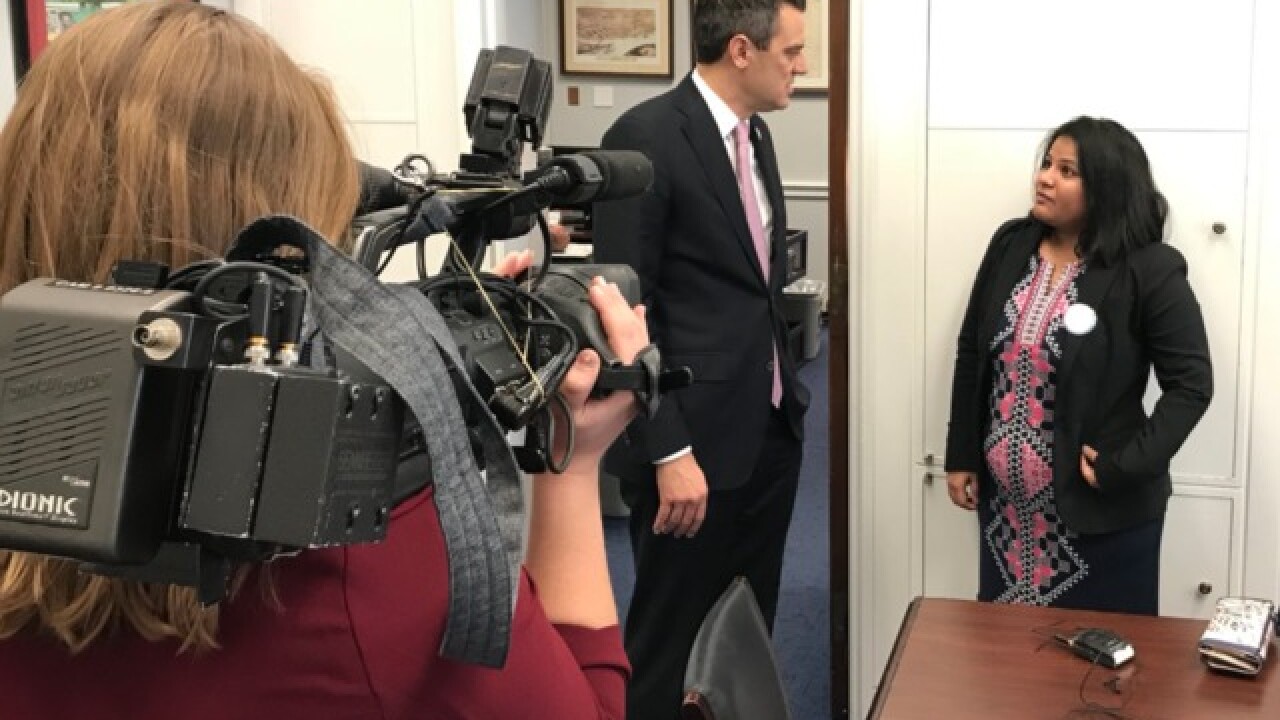 WASHINGTON, D.C. — Sunayana Dumala’s husband, Srinivas Kuchibhotla, was killed a year ago in February. He was the victim of an alleged hate crime.

Kuchibhotla was killed when a suspect opened fire inside Austin's Bar & Grill in Olathe, Kan. last year. The suspect allegedly yelled "get out of my country!" before fatally shooting Kuchibhotla and injuring two others.

When her husband died, Sunayana’s legal status in the United States passed with him. She knew it almost instantly.

“At that point in time, my head was still trying to process that what I heard was true. But that I did knew that I’d be going out of status,” she said.

“Because her husband was here on only a temporary work visa as opposed to a permanent residency, then when he was murdered, her immigration status vanished, as well,” said Rep. Kevin Yoder, U.S. Representative for the 3rd District, in which Sunayana and her husband lived.

Sunayana’s husband was here on an H-1B work visa, one given to people to come here for specialized jobs. He’d been waiting on permanent residency since 2010, and likely would’ve had to wait quite a while longer.

The U.S. currently allows 140,000 people who are in the country on employment-based visas to gain permanent residency per year.

However, the U.S. caps the number of those granted green cards to 7 percent from any one country.

Sunayana now meeting @PatrickMcHenry to explain her story. McHenry just told her “your story is a powerful one. Thank you for being willing to tell it.” ...”you are an amazing advocate”. And “I’m grateful you want to be a part of America.” pic.twitter.com/vtp7csztWy

This means no more than 9,800 green cards are granted to people from any one country.

“If Sunayana and her husband had been from any other country in the world, she would already be a United States citizen,” said Yoder.

Now @KevinYoder follows up with why his bill HR392 is so important.
McHenry then says to Dumala “I’ll remember you as we’re having these discussions” pic.twitter.com/nTfybcZGjB

“At 10:30 at night, she calls me and she says, ‘Sunayana! It’s approved,’” Sunayana recalled with excitement.

Sunayana now has her own work visa and can apply for permanent residency.

She’ll be on the wait list with all others from India here on work visas.

Yoder wants this to change. He has introduced a bill that would change several things about the immigration process, including the 7 percent cap. It’s called House Resolution 392.

Sunayana meeting @TulsiGabbard ...@KevinYoder brought her out after the House vote series to meet Sunayana. Gabbard is Democrat from Hawaii, co-author of Yoder’s letter to congressional leadership on immigration. pic.twitter.com/P62lc8lOS6

“What I’m pushing to do is to have this bill debated on the House floor. Give it its moment in the sun. Give these people a chance to be heard and have their voices heard in the Halls of Congress,” said Yoder.

Sunayana wants to see this change.

“Maybe at this point of time, I would’ve just focused on rebuilding my life rather than trying to fight for my status in the country,” said Sunayana.

Congresswoman Tulsi Gabbard, the Democratic Co-Chair of the bipartisan Congressional Caucus on India and Indian Americans, spoke with Sunayana.

She released the following statement:

"H-1B visa holders contribute to the vibrant and diverse fabric of our country - driving innovation, building our economy, and filling the gaps in our domestic workforce. Despite the darkness and hatred that took her husband's life, Sunayana continues to be a shining light for immigrants by sharing her powerful story with love, positivity, and Aloha. We must continue to welcome and leverage the talent and expertise of H1-B visa holders like Sunayana, while investing in the development and training of skilled American workers."