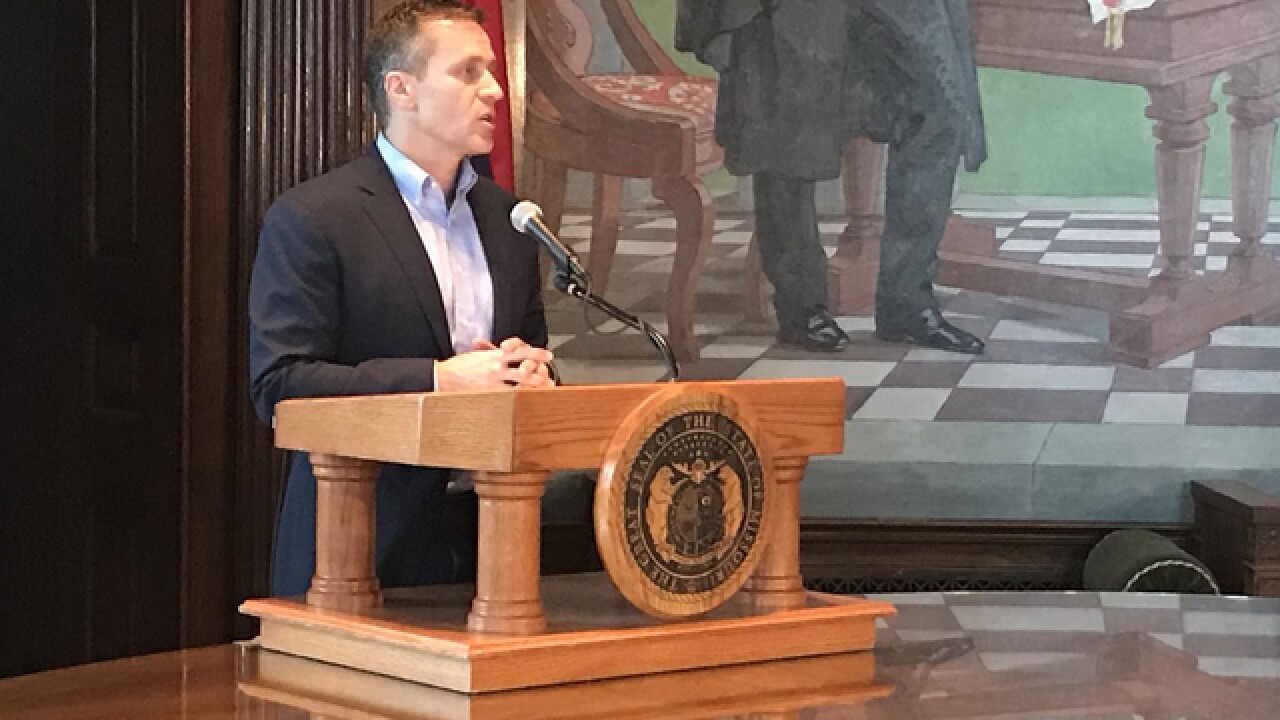 JEFFERSON CITY, Mo. (AP) -- A woman with whom Missouri Gov. Eric Greitens acknowledged having a consensual affair told prosecutors that Greitens coaxed her into unwanted sexual activity as she was crying "like a wounded little animal on the ground," according to a legislative report released Monday that accuses the governor of mischaracterizing the woman's testimony.

The brief, graphic report from a special House investigatory committee is intended as a rebuttal to Greitens, who had asserted that the video interview of the woman "undermined the narrative" of an earlier House report detailing the woman's allegations that Greitens had been physically aggressive toward her.

To the contrary, the House panel said the additional interview bolsters the woman's credibility.

The governor's legal team put out a statement after the report's release and once again denied the claims against him. The statement also claimed that a member of the Missouri media delivered a $50,000 payment to the law firm representing the ex-husband of the woman he had an affair with.

The latest report highlights the escalating tension between the first-term Republican governor and the GOP-led Legislature, which is weighing whether to initiate impeachment proceedings to try to remove Greitens from office. The panel is expected to release another lengthier report later this week examining allegations that Greitens wrongly used a donor list from a veterans charity he founded to raise money for his political campaign.

Greitens already faces two felony charges. He's scheduled to go to trial May 14 on an invasion of privacy indictment alleging he took and transmitted a nonconsensual photo of the at least partially nude woman in March 2015, before he was elected governor. No trial date has been set yet a charge of tampering with computer data for allegedly disclosing The Mission Continues donor list to his political fundraiser without the permission of the St. Louis-based charity.

The House committee released a report April 11 with testimony from the woman alleging Greitens had restrained, spanked, slapped, shoved, threatened and belittled her during a series of sexual encounters that at times left her crying and afraid.

The next day, Greitens released a statement asserting that a previously undisclosed video interview of the woman conducted by St. Louis prosecutors "undermined the narrative pushed in the House report."

Among other things, Greitens said allegations of "coercion, violence and assault" were "false." He said the woman talked for almost two hours in the video and never mentioned coercion, which Greitens said was inconsistent with her testimony to the House committee.

The new House report agrees that the woman did not use the word "coerced" in the prosecutor's interview, but it says she described coercion using other even more graphic words. When she tried to leave Greitens' home, she told prosecutors that he laid her down "in the fetal position," undid his pants and put his penis near her face, so she "gave him a blow job" so that she could leave.

She said Greitens was "just really coaxing me like a wounded little animal on the ground," the House report said while recounting the interview with the prosecutor's office.

The woman's name never has been officially released; it is redacted from legislative documents and she is identified only by her initials in court filings.

Greitens' attorneys are asking a judge to prohibit testimony from the woman at his upcoming trial because of the "gross misconduct" of a private investigator who interviewed her for prosecutors. Defense lawyers in a Friday court filing also noted that the investigator, William Tisaby, refused to answer questions when he was deposed last week. Judge Rex Burlison didn't rule Monday. He set a hearing for May 7.

Greitens lawyers have accused Tisaby of lying in court and being slow to turn over evidence to the defense. The St. Louis circuit attorney's office acknowledges missteps by Tisaby but says his actions haven't tainted the case.