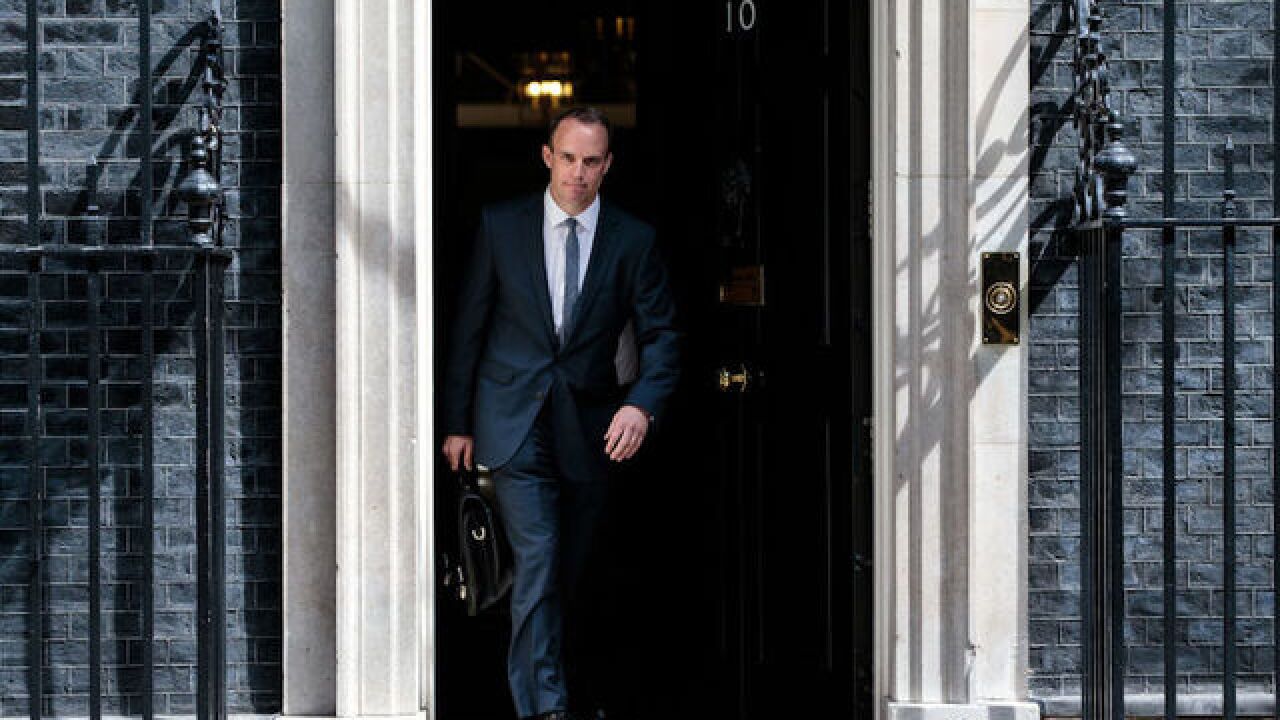 Image copyright 2018 Getty Images. All rights reserved. This material may not be published, broadcast, rewritten, or redistributed.
Jack Taylor
<p>Dominic Raab leaves Number 10 Downing Street after being appointed Brexit Secretary by British Prime Minster Theresa May on July 9, 2018 in London, England. Last night David Davis quit as Brexit Secretary over his opposition to Mrs May's plan for the UK's future relations with the EU. </p>

The Brexit strategy of British Prime Minister Theresa May was dealt a serious blow on Monday with the unexpected resignation of the cabinet minister directly responsible for managing the process of leaving the European Union.

David Davis declared he could not support the deal drawn up by May to unite her divided cabinet, saying it involved too close a relationship with the EU and gave only an illusion of control being returned to the UK after Brexit.

"It seems to me we're giving too much away, too easily, and that's a dangerous strategy at this time," Davis said in a BBC radio interview Monday morning.

All eyes are now on the pro-Brexit Foreign Secretary Boris Johnson, who is due to make a statement late Monday afternoon local time. If Johnson also resigns, May's ability to remain as Prime Minister would be seriously weakened.

Davis' resignation means the consensus over a strategy for a post-Brexit deal, agreed May and her government on Friday at Chequers, the Prime Minister's country house, lasted barely three days.

"David Davis resigning at such a crucial time shows @Theresa_May has no authority left and is incapable of delivering Brexit," opposition Labour Party leader Jeremy Corbyn said in a tweet.

"With her Government in chaos, if she clings on, it's clear she's more interested in hanging on for her own sake than serving the people of our country."

One of many Euroskeptics in May's Cabinet, Davis was a high profile supporter of the Leave campaign during the Brexit referendum, putting him at odds with the Prime Minister, who supported remaining within the EU.

In his resignation letter to May, Davis said he was "unpersuaded that our negotiating approach will not just lead to further demands for concessions," and said the national interest required someone in his position to be an "enthusiastic believer in your approach, and not merely a reluctant conscript."

Another leading Conservative Brexit supporter Jacob Rees-Mogg said on LBC radio Monday that he would not join "socialists" to vote against the government but urged May to give up on her current proposal on how the UK will leave the EU.

"What the Prime Minister needs to do is to give up on the Chequers proposal...which does not actually deliver Brexit," he said.

Representatives of large British companies have argued for a deal that would maintain the status quo with the EU on tariff-free trade and maintaining alignment with EU legislation on everything from state subsidies to environmental standards.

Several major European companies, including Airbus, BMW and Philips have said they may be forced to leave the UK, taking thousands of jobs with them, if Britain pursued a deeper break with the EU, because of the effect of a so-called "hard Brexit" on cross-border supply chains.

Failure to agree conditions with the EU before March would result in a "no-deal" Brexit that could wreak havoc on the UK's relationship with its biggest export market, leaving it with no arrangements on staying in or having access to the customs union and single market.

The EU has long maintained that countries outside the single market cannot enjoy its benefits, and exiting it could lead to a hard border in Ireland that many fear could reverse Northern Ireland's hard won peace.

Multiple major British businesses have warned May she needs to secure a Brexit deal or face potentially ruinous consequences for the UK economy.

The latest British Brexit debacle comes as May is preparing for a state visit by US President Donald Trump later this week, and faces a potential new international crisis after a British citizen died as a result of being exposed to Novichok, the same nerve agent used to poison former Russian spy Sergei Skripal and his daughter.

Long before the Brexit referendum and its aftermath, the Conservative Party was split on Europe, and May has struggled to unite the warring wings under her leadership.

An attempt to enlarge her parliamentary majority with a snap election -- that would have allowed her to sideline Euroskeptic Conservatives and pursue her own vision of Brexit -- ended in embarrassing failure and almost saw the Party lose control of government.

The government currently only has a whisker-thin majority, thanks to the support of the right-wing Northern Irish Democratic Union Party (DUP). Another general election could be called if May loses a vote of no confidence in the House of Commons.