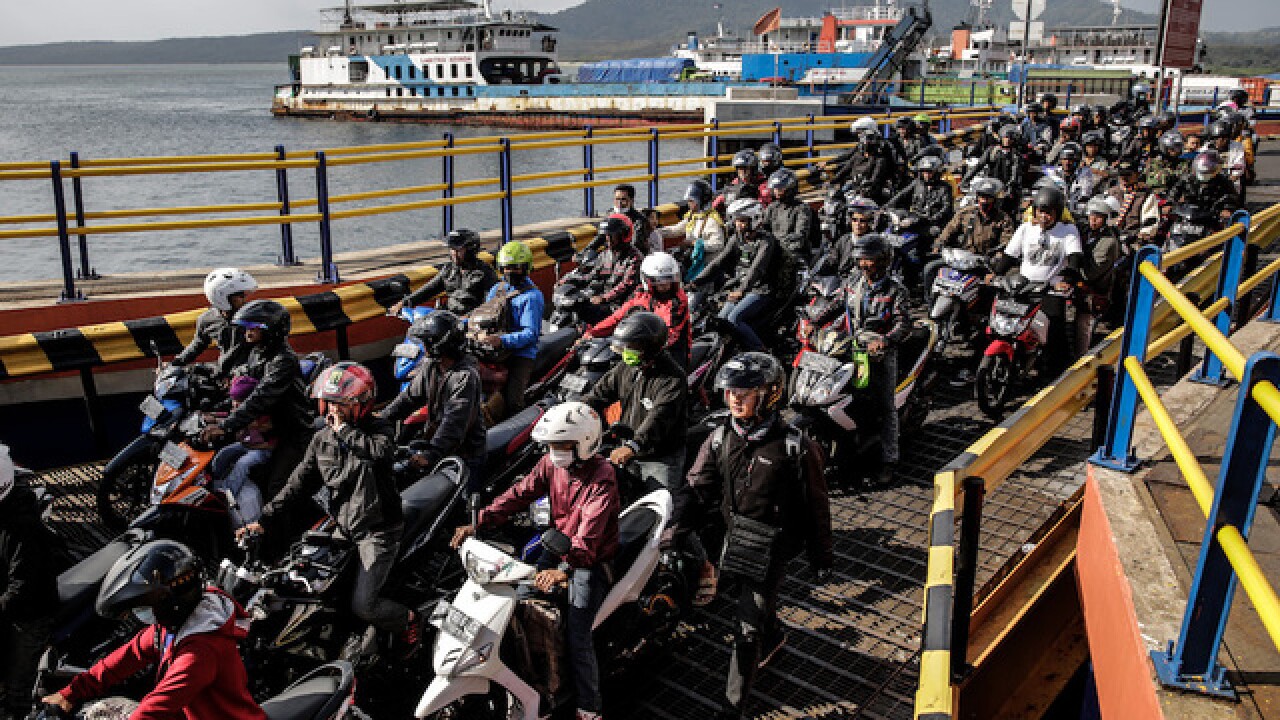 Image copyright 2018 Getty Images. All rights reserved. This material may not be published, broadcast, rewritten, or redistributed.
Agung Parameswara
<p>Indonesian riders on their motorbikes queue to board a ferry at Gilimanuk Port on July 24, 2014 in Jembrana, Indonesia. In the days ahead of the Eid al Fitr holiday, millions of Indonesians working in Bali return to their hometowns to celebrate the holiday with family. </p>

The Sinar Bangun tourist ferry had a maximum capacity of 60. But as the sun began to set on Monday evening, more than 200 people are thought to have crammed aboard the small, rickety vessel to make the 40-minute journey across Lake Toba, on the Indonesian province of North Sumatra.

Many of those on board were young families returning home to celebrate Eid al-Fitr, the Muslim holiday that marks the end of the holy month of Ramadan, which this year lasts until June 21.

Within 20 minutes most of those passengers would be dead, trapped inside the vessel's main cabin as it overturned and sank.

Moments before the accident authorities believe high waves of up to three meters had buffeted the boat, rocking it from side to side.

"When the boat started to list I jumped into the water and swam as far away as I could," said Rudi Wibowo, one of only 18 people to have been pulled from the water alive, all within a few hours of the sinking.

Wibowo had been on the island of Samosir in the middle of Lake Toba as part of a camping trip with nine friends. He saw all of them drown.

The majority of those who survived were outside on the front deck, as they had arrived late and the seating areas were full, Wibowo told CNN, who trod water for an hour before he was rescued.

"The passengers inside were unable to break the windows and escape," said Wibowo.

The Indonesian emergency services believe most of the bodies of the victims are still trapped inside the two-tier Sinar Bangun at the bottom of the lake, which is up to 505 meters (1,657 feet) deep.

"We now consider this a recovery effort rather than a search and rescue due to the amount of time that has elapsed since the sinking," said Indonesian National Board for Disaster official, Wanda Ketaren.

Surya Dharma, a first sergeant in the Indonesian Air Force (TNI-AU) was one of the first military personnel on the scene.

"Survivors told us that parents had to choose between trying to protect their children by staying on the boat and hoping it wouldn't sink, or jumping into the water and watching them drown," said Dharma, adding that many of the passengers couldn't swim and there were not enough life jackets on board.

Recovery efforts have been complicated by the lack of an official passenger manifest.

Without any way of knowing the exact numbers aboard the stricken boat, the Indonesian authorities are relying on estimates provided by family members who arrived following news of the accident.

As of Wednesday, the number of missing had increased to 192 people, according to figures provided to CNN by Indonesian National Search and Rescue Agency spokesperson Dedi Karyadi.

In addition the 18 survivors, three bodies have also been recovered, bringing the total number aboard the 60-person capacity ferry to 213.

The exact cause of the accident is unknown, with authorities pointing to both bad weather and overloading as potential factors. However, Chief of Police for Simalungun Regency, Liberty Pandjaitan, told CNN that investigators believe "human error" was also involved.

"The boat captain was found alive and has been taken into custody," said Pandjaitan, who said police would not release details of the case publicly for fears of reprisals against his family.

Lake Toba is a popular sightseeing choice in North Sumatra thanks to its status as the largest crater lake in the world which spans some 1,130 square kilometres (440 square miles).

The Indonesian government recently declared the area one of the " 10 New Balis ," a new tourism growth strategy -- and the brainchild of Indonesian president, Joko "Jokowi" Widodo -- designed to lure foreign visitors to other parts of the country.

The strategy also included the opening of Silangit International Airport, an hour's drive from Lake Toba, in October 2017.

Despite a concerted effort to encourage more foreign visitors to Lake Toba however, officials have been unable to confirm if any foreign nationals had been on board the ferry.

As news of the accident spread, locals who feared their relatives were on board rushed to the makeshift crisis center set up at Tigaras Port, the boat's intended destination.

Nurhayati, who only goes by one name, arrived in hope of hearing news of her brother, 30-year-old Yudi, who was visiting for the Eid holiday from his home in Pekanbaru, in Riau Province.

He was traveling with his wife and two-year old son, and posted a picture on Facebook of his family boarding the ferry at 11 a.m. on Monday, with plans to come back later that day. His phone is now inactive.

"None of them know how to swim," says Nurhayati, wiping away tears.

Another family member desperately looking for answers was Suparmi, who also only uses one name, and who arrived at the center at 10 a.m. on Tuesday in search of her 23-year-old son, Muhammad Apriani Sutomo.

He was with his girlfriend and told his mother he planned to visit the lake as part of a day trip.

Suparmi has been ringing his phone ever since he failed to come home, and his girlfriend's family has been unable to reach her.

"Please don't let it be my child. He said all he wanted to do was spend the day swimming," she says before covering her face with her hands.

Despite the slow progress, both Nurhayati and Suparmi are reluctant to criticize the search and rescue effort, which has also been hampered by high winds and poor visibility.

For both of them, the agonizing wait for news of their loved ones continues, and Nurhayati urges the search and rescue teams not to give up.

Although she believes her brother, his wife and her nephew have all drowned, she continues to hold out hope they will be found.

"I don't care if I just get their bodies back," she says, "I can't rest not knowing where they are."