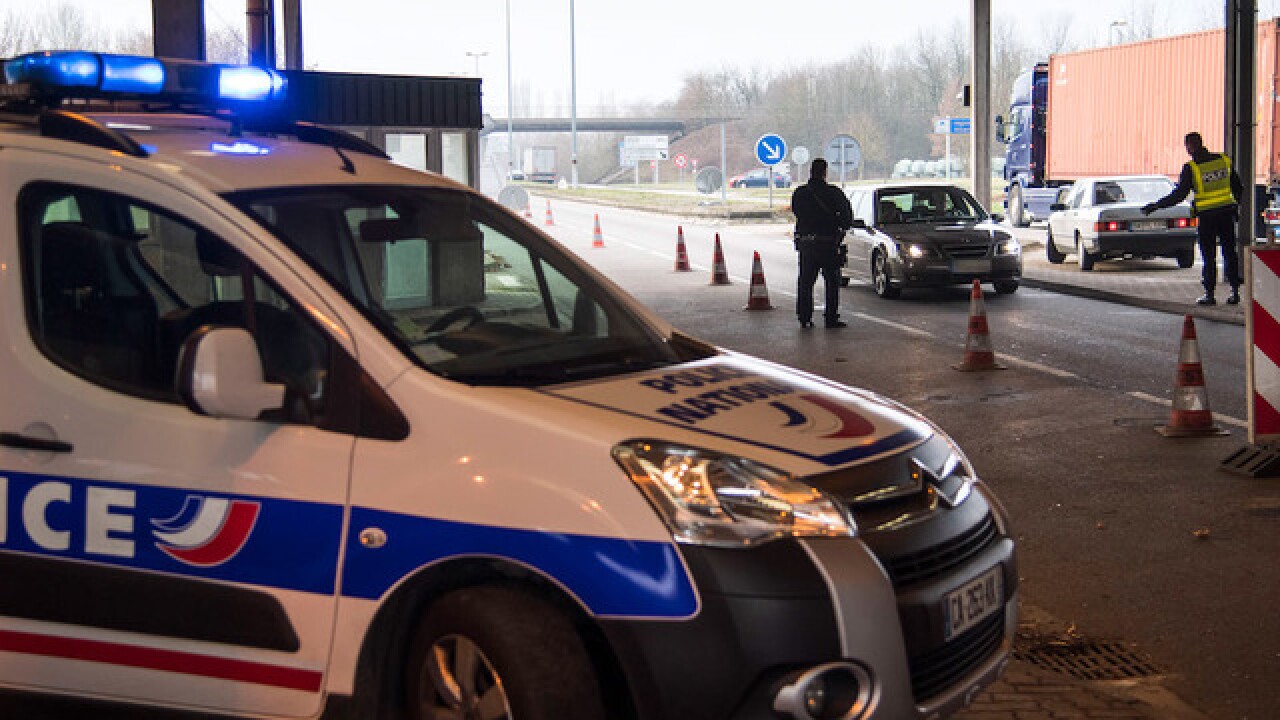 Image copyright 2018 Getty Images. All rights reserved. This material may not be published, broadcast, rewritten, or redistributed.
Thomas Lohnes
<p>(EDITORS NOTE: Parts of this image have been pixelated to obscure the identity of the license plate for legal reasons.) Police officers controlle cars at the boarder crossing at the highway A35 between Woerth (Germany) and Strassbourg the day after a man shot 14 people, killing at least three, on December 12, 2018 near Lauterbourg, France. Police have identified the man as Cherif Chekatt, a French citizen on a police terror watch-list. Chekatt exchanged gunfire with soldiers after the attack, is reportedly injured and is still on the loose. </p>

A gunman who opened fire near a Christmas market in Strasbourg shouted the Arabic phrase "Allahu Akbar," meaning "God is greater," at the time of the attack, French prosecutors said, as anti-terror police joined an international manhunt.

The suspect, identified only as 29-year-old Cherif C, killed two people and left one on life support with no chance of recovery, said Paris prosecutor Remy Heitz. Police had previously said three people were killed and 13 injured in the attack Tuesday.

The gunman -- who remains on the run -- has an extensive criminal background that includes 27 convictions in France, Germany, and Switzerland, said Heitz, mainly for acts of robbery and violence.

The father, mother and two brothers of the suspect are in custody and being questioned by police, a source close to the investigation told CNN.

A curfew in the eastern French city, which lies on the border with Germany, was lifted overnight but law enforcement urged vigilance. Border security has been tightened, authorities said.

Deputy Interior Minister Laurent Nunez earlier told France Inter radio station that while authorities had secured the border and set up a perimeter around Strasbourg, they were unsure if the suspect was still in France.

Swiss police said they were "on alert" and in close contact with their French counterparts. Germany's federal police said intensive search efforts on roads and rail could cause delays for people crossing the border.

Suspect injured in exchange of fire

Strasbourg's famed Christmas Market is one of the oldest in Europe and draws millions of visitors each year. The suspect entered the perimeter of the market by the city's Corbeau Bridge, and began shooting at passers-by on the Rue des Orfèvres at about 8 p.m. local time, when many were in the middle of their Christmas shopping.

Anti-terror police descended on the market and attempted to apprehend the suspect as he traversed several streets. He exchanged fire with security forces, suffering an injury to his arm. "Throughout this journey, he repeatedly opened fire with a handgun and used a knife which he both used to seriously injure and kill," said Heitz, speaking in Strasbourg.

The suspect then fled the scene by a taxi and headed to the city's Neudorf district, the Paris prosecutor's office said. Heitz had earlier said the destination was Neuhof, a more distant district of Strasbourg.

"The taxi driver stated that he had seen him in possession of a handgun and he had injuries," said Heitz. The man again exchanged fire with police after leaving the taxi, he added.

Eight people were seriously wounded in the attack, Strasbourg police said Wednesday, with five others suffering from minor injuries.

Gunman was known to police

The suspected gunman, who was previously identified by CNN affiliate BFM as a 29-year-old male born in Strasbourg, was on a French watch list called a "Fiche S" surveillance file.

The "Fiche S" is a French terror and radicalization watch list that includes thousands of people, some of whom are under active surveillance, meaning they are on law enforcement's radar.

French gendarmes had attempted to bring him in for questioning Tuesday morning before the attack but found he wasn't home, a spokesperson for France's National Police told CNN, without providing further details.

Addressing the National Assembly, Castaner said the suspect had been known to police for his criminal behavior from the age of 10 and was first convicted of a crime aged 13.

The interior ministry in the German state of Baden-Wuerttemberg confirmed Wednesday that the suspect had been convicted of break-ins and serious theft by a court in Singen in 2016 and subsequently spent time in a prison in the city of Freiburg. He was deported to France in 2017.

The German authorities cooperate closely with their French partners, a spokesman for the interior ministry said, adding that it cannot be ruled out that the suspect may have crossed the open border. Swiss officials also said they were on alert.

The German Federal Criminal Office said the suspect was not known in Germany as a radical Islamist.

A spokeswoman for the Swiss Federal Police, Cathy Maret, told CNN the alleged attacker was well known to authorities there, having been arrested and convicted several times in Switzerland for crimes such as break-ins, theft and violence. He was not on their radar as a radical Islamist or for narcotics violations, she said.

Witness: 'It was a moment of terror'

Simone Ceruti was in the city's Kleber Square when the shooting started. "There was a lot of panic, people fleeing and seeking for shelter," said Ceruti, who filmed footage of the police response from a nearby apartment.

"I let a few ladies in the building where I'm staying these days and then they were accompanied by police," he said. "It was a moment of terror."

The injured were taken to a Strasbourg hospital.

French President Emmanuel Macron tweeted early Wednesday in solidarity with the French people. "Solidarity of the whole Nation for Strasbourg, our victims and their families," he said.

The Christmas market will be closed Wednesday and flags will be at half-staff, Strasbourg's mayor said on his Twitter account. All shows scheduled to be performed at the city's cultural institutions will also be canceled on Wednesday, he said.

All rallies and demonstrations throughout the Strasbourg area were barred until further notice, the Prefecture of the Grand East and Lower Rhine Region said.

However, the city's elementary, high schools and colleges will be open on Wednesday, local police said.

Strasbourg, a picturesque city of about 300,000 in France's Grand Est region, has previously been at the center of French counter terrorism operations. The market itself was targeted 18 years ago in a thwarted plot by al Qaeda-linked terrorists.