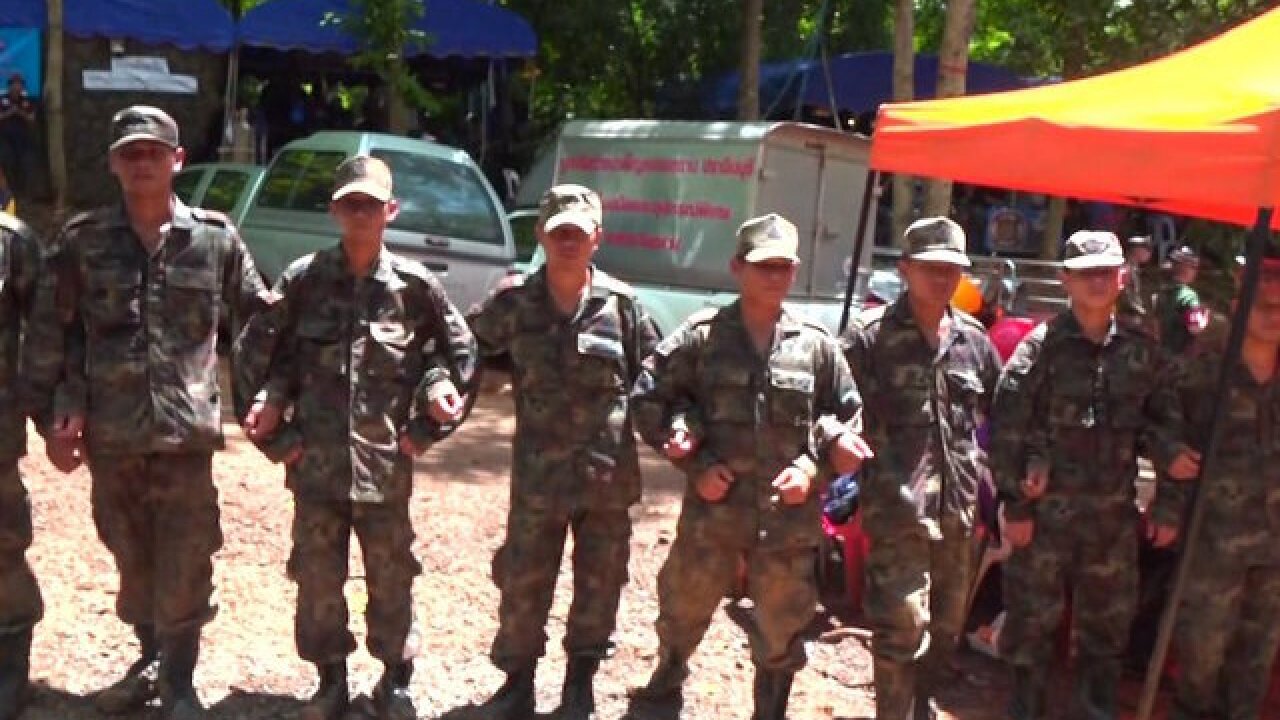 © 2018 Cable News Network, Inc.
CNN
<p>The teenage soccer team trapped in a cave system in northern Thailand will spend another night almost a kilometer underground, after officials coordinating the rescue said that they won't attempt to move them before Thursday.</p>

The teenage soccer team trapped in a cave system in northern Thailand spent another night almost a kilometer underground, after officials coordinating the rescue said they won't attempt to move them before Thursday.

New video released by the Thai Navy SEALs Wednesday showed the boys wrapped in foil blankets for warmth, as they speak up one by one, introducing themselves and saying "I am healthy." One said "thank you" to everyone who is waiting for their rescue.

Claus Rasmussen, who is part of the rescue team, said the boys have told divers they heard dogs barking, a rooster crowing and children playing. That information now has teams looking at whether there is a chimney or hole they can access instead of trying to get the boys out through the water.

At least one plan to bring the boys back to the surface include having the teammates, aged 11 to 16, and their 25-year-old coach, dive through the narrow flooded tunnels in full-face diving masks.

The plight of the boys and their coach has captured the world's attention. Former Real Madrid and Brazil soccer legend Ronaldo spoke to CNN at an event in Russia about the soccer team.

"It's terrible news and the world of football hopes that someone can find a way to take these kids out of there," he said.

"We have very strong ties with the country of Thailand, I'm closely following the rescue efforts to secure the lives of the 12 players and their coach," said Fuchs. "I wish everybody all the best with their rescue efforts and I'm sure everything will be turning out well. Be strong."

Fuchs won the Premier League title with Thai-owned Leicester in 2016.

"Hi, I'm Christian Fuchs from English Premier League team, Leicester City Football Club. We have very strong ties with the country of Thailand, I'm closely following the rescue efforts to secure the lives of the 12-players and their coach. I wish everybody all the best with their rescue efforts and I'm sure everything will be turning out well. Be strong."

In a press conference Wednesday morning, Chiang Rai governor Narongsak Osottanakorn said it would be "difficult" to bring them out Wednesday. He said he didn't want to give an estimate on when they could be brought out and be reunited with their families.

To keep the boys' spirits up, authorities are attempting to set up phone lines inside the cave to allow them to talk to their parents.

However, attempts to install the cables have been unsuccessful so far, Maj. Gen. Bancha Duriyaphan said. One cable suffered water damage as divers transported it "around small passages." Teams are attempting to take in a new one.

"When the telephone line is ready, we will have relatives talk to them. The pressure will be immensely reduced," Maj. Gen. Chalongchai Chaiyakum, another military spokesman, said.

It's now been over 48 hours since the boys were first located by two British divers, and while SEAL divers have been able to reach them with food and medicine, conditions mean it's currently too risky to bring them out the same way the divers came in.

It's is a long, hazardous dive, even for the experienced Navy SEAL divers.

Why will it take so long to rescue the trapped Thai soccer team?

Eight members of the navy team, as well as a doctor and nurse, are staying with the kids and their coach in the cave overnight, the Thai Royal Navy said in a Facebook post early Thursday. The insignia of the SEALs has been etched onto a rock face in the cave, video from the group's Facebook page shows.

Initial medical check-ups showed the boys to be in good health. Video showed some being treated for scrapes and mild rashes.

The doctor, Lt. Col. Park Loharachun, hasn't left the boys' side since diving into the cavern.

The divers are making the complicated dive back and forth to the small, cramped shelf where the boys have sheltered within the flooded cave complex. The group has been given high-protein gels to rebuild their strength.

After the initial contact with the British divers -- two volunteer specialists who flew in to help with the search -- the SEAL team returned to give the boys a meal of grilled pork and sticky rice, along with milk.

The focus now is on getting the teammates ready for the journey ahead. On Wednesday, the children -- some of whom can't swim -- practiced wearing the full-face oxygen masks they'll need to wear to survive the journey out.

They've tried using the equipment and breathing with it, but haven't been submerged in the flood water, Osottanakorn said, as currents are too strong.

The plan is to bring them out at different times, depending on their strength.

"They don't have to leave all at once. Those who are ready can come out first. We are reassessing the situation daily. We have to see they are ready. Therefore if we found any risk we won't carry out the (evacuation) plan," he added.

A sense of urgency persists with unpredictable weather and the threat of more rain that could further flood the chambers. The governor said water is still being pumped out of the cave "at full speed" to reduce water levels.

Days of relatively fine weather have given rescuers a window to prepare for the moment the boys eventually emerge from the cave. Soldiers dressed in green fatigues practiced evacuation drills, linking arms to form a human wall around the mouth of the cave.

Thailand cave rescue: The health toll of waiting for freedom

Debate remains over the best way to bring the boys to safety.

Given their weakness after a week with no food, trapped in the dark, and their unfamiliarity with scuba systems, some experts say it's too difficult to bring a group of novices through a cave system that has made even caving experts nervous.

Cade Courtley, a former US Navy SEAL and author of the "SEAL Survival Guide" told CNN that he "was part of a very special dive unit and this would be a challenging dive for me and my team... now you're going to ask 11 to 15-year-olds -- some of whom cannot swim -- to make that same journey for the first time breathing air underwater?"

The rescue in Thailand is "one of the toughest I've seen," Anmar Mirza, national coordinator of the National Cave Rescue Commission and a rescue diver with 30 years' experience, told CNN .

The most dangerous option, he said, "is trying to teach them enough diving skills to dive them out. It's physically strenuous: in water, through blackout conditions, through tight squeezes for hundreds of meters."

"It's something that skilled cave divers spend hundreds of hours training for after they have already been open water divers for quite some time," he told CNN. "A moment of panic or loss of the breathing regulator can be fatal for the novice diver, and may also put the cave diver escorting him in danger."