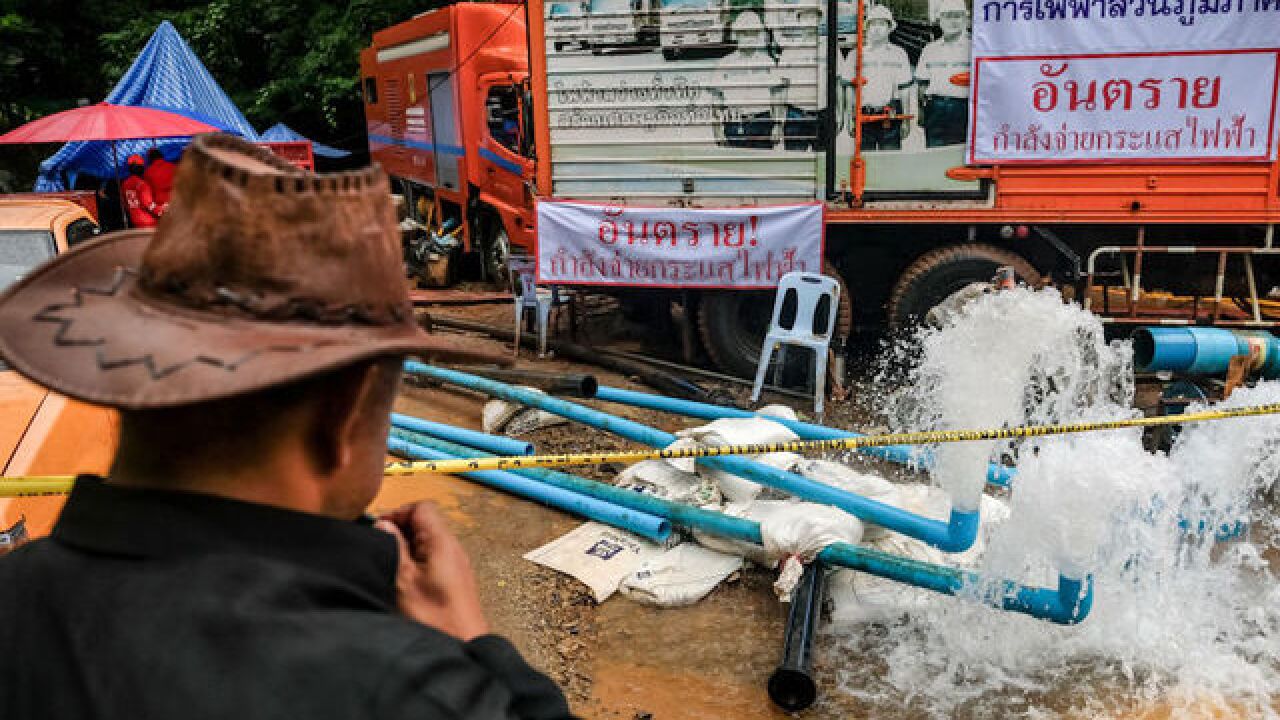 Image copyright 2018 Getty Images. All rights reserved. This material may not be published, broadcast, rewritten, or redistributed.
Linh Pham
<p>Water pumping machines keep working to continue the rescue after the 12 boys and their soccer coach have been found alive in the cave where they've been missing for over a week after monsoon rains blocked the main entrance on July 03, 2018 in Chiang Rai, Thailand. Chiang Rai governor Narongsak Osatanakorn announced on Monday that the boys, aged 11 to 16, and their 25-year-old coach were being rescued from Tham Luang Nang Non cave after they were discovered by naval special forces and the challenge now will be to extract the party safely.</p>

The initial relief that greeted the dramatic discovery of the trapped Thai soccer team has given way to concern, as rescuers begin the difficult task of attempting to free the 12 boys and their coach from deep inside the flooded cave network.

Video shared by the Thai Navy SEALs shows the boys, who were found alive by British divers in the early hours of Monday evening, huddled together on a small patch of dry ground, surrounded by water in a cramped, pitch-black chamber.

"It is estimated that the boys are around two kilometers (1.2 miles) into the cave and somewhere between 800 meters to one kilometer (0.6 miles) below the surface," said Bill Whitehouse, vice chairman, British Cave Rescue Council, whose organization has helped spearhead the search of the Tham Luang Nang Non cave system in northern Thailand.

But as the search operation enters into the next phase, options for rescuers appear limited. The area in which the group remains stranded is only accessible via a narrow, flooded channel, and attempts to pump water from the cave, or find a natural opening in the roof of the chamber, have so far proved unsuccessful.

How long can they wait?

Capt. Akanand Surawan, a commander with the Royal Thai Navy, said authorities would now supply the group with four months' worth of food and begin teaching the boys how to scuba dive.

Surawan's reference to four months has been interpreted as a potential sign that authorities are considering waiting until after the rainy season ends in October to begin the rescue operation.

But with heavy rain expected to continue in the coming days, rising water levels could force rescuers to act sooner rather than later.

"We believe that there is only a short break in the monsoon and all feasible options for the rescue of the boys are being considered," Whitehouse said in a statement.

"Although water levels have dropped, the diving conditions remain difficult and any attempt to dive the boys and their coach out will not be taken lightly because there are significant technical challenges and risks to consider," said Whitehouse.

Diving is considered among the least preferable escape methods, with experts cautioning that any attempt to traverse the narrow passageways will be fraught with difficulties and potential complications, especially if the children can't swim.

"Worst case scenario is they have to dive them out," said Pat Moret, a rescue consultant told CNN on Monday.

"It won't be anything like diving that most people recognize. It will be diving in what is effectively muddy water, possibly fast flowing, with no sense of direction," Moret said. "You can't tell what's up, down, sideways."

The emotional toil of any rescue attempt would also need to be considered said Paul Auerbach, Professor of Emergency Medicine at Stanford University.

"They'll be assessed for hydration status, adequate fuel supply, adequate food so that their glucose level is adequate, and then no doubt they'll do practice dives," he added.

The boys, who are between ages 11 and 16 and are members of the Wild Boars soccer team, had been exploring the cave network with their soccer coach on June 23, when heavy seasonal rains flooded the cave's entrance, forcing the group further and further into the labyrinth of tunnels in search of high ground.

Their sudden disappearance sparked a desperate nine-day race against time as hundreds of volunteers and specialist international search teams battled against the heavy rains to locate the missing group.

On Monday, Narongsak Osottanakorn, governor of Chiang Rai, the region where the caves are located, told reporters that the mission is "not done yet" and medical experts need to enter the cave to assess the boys before any further action is taken.

"We will drain all water out from the cave then we will take all 13 people out of the cave. We are now planning how to send (a) nurse and doctor inside the cave to check their health and movement. We will work all night," he said.

Surawan, a commander with the Royal Thai Navy, said additional divers will accompany the doctor and nurse. Rescuers will also pump air into the cave to improve conditions.

Rescue teams have been trying to drain the underground tunnels for several days, and at one point were removing an estimated 1.6 million liters of water an hour. However, continuous rains have frustrated attempts to clear the passageways, with the water remaining at a steady level.

A final rescue option could see the boys lifted through the roof of the cave chamber to safety, either through a natural opening or a drilled entry point.

During an attempted rescue mission last week, trekkers found a hidden opening deep in the jungle, giving them another way to enter the cave system. The natural chimney was least 1.5 meters in diameter and at least 22 meters (72 feet) deep.

Though the opening did not connect to the area where the boys were discovered, now that the exact location is known, rescue efforts can focus on finding other, potentially hidden openings.

"Back here in the UK, there is an assessment of electronic equipment that may be suitable to pin-point the underground location of the boys and coach with a greater degree of accuracy than the published surveys," said Whitehouse.

"They (the group) are also located in a relatively small space and this would make any potential drilling attempt as a means of rescue very difficult," added Whitehouse.

"The necessary equipment will be sent to Thailand if electronic experts agree on the feasibility that it will operate over such depths."